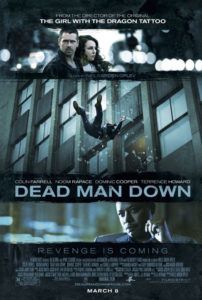 Shades of blue-hued noir lend Dead Man Down enough mystique and tonal seriousness to engage a willing audience in the film’s gritty yet woeful atmosphere, even after the film missteps into a devolved, actionized shoot-em-up in the final scenes. Another vengeance-themed thriller by Niels Arden Oplev, the Danish filmmaker who made the Swedish version of The Girl with the Dragon Tattoo, the film reteams Oplev with that film’s star, Noomi Rapace. Colin Farrell also stars alongside the solid supporting cast of international talent carrying the picture, Oplev’s first American production. The result contains all the excitement and darkness of his previous effort, and a certain European flair that leaves his New York City shooting locales feeling like the drab cities in a Swedish noir. And even though the story sometimes veers into silly or cliché territory, the two central performances and sharp visuals keep us interested.

Farrell plays Victor, a former Hungarian engineer whose wife and child were murdered by local ganglords during a real estate shakedown. Ever since, Victor has dedicated his life to exact slow vengeance on the man responsible, Alphonse (Terrence Howard). Victor’s elaborate plan, already halfway complete by the film’s opening, involves joining Alphonse’s band of hoodlums, making him suffer through a series of taunting letters, and eventually killing everyone involved in the death of his family. One-by-one, members from both Alphonse’s crew and the Albanian gang that carried out Alphonse’s orders are taken down. With each death, Victor sends a small piece from a photograph that, when assembled, will form a picture of Victor’s once happy family. At the same time, Victor’s plans are interrupted when a woman in the building opposite his witnesses him kill someone. A former cosmetologist whose face was scarred from an accident with a drunk driver, Beatrice (Rapace) blackmails Victor to kill the irresponsible driver who ruined her face. Of course, the scars aren’t so unsightly that Victor fails to notice how attractive she is.

As Victor coordinates two revenge schemes at once, his time with Beatrice hints at a hesitant romance between them. Both of these characters are so damaged, so filled with hatred for their respective targets, that they resist feeling anything for each other, and the plot pushes them together and pulls them apart in ways that make the impending desires more suspenseful than the revenge scenario. Meanwhile, Beatrice’s charming mother (Isabelle Huppert) seems cheerfully aware that these two are meant for each other. A number of notable performers like Huppert make up the supporting cast: F. Murray Abraham plays the funder of Victor’s revenge scheme; Armand Assante heads Alphonse’s crime syndicate; Dominic Cooper is Victor’s sympathetic friend, a wannabe bad guy who’s a family man at heart. Names like this enhance such roles and make them more watchable than they have any right to be, but watchable they are.

J.H. Wyman’s slow-burn screenplay takes time to establish its characters; audiences willing to give the film their full attention will benefit from the way most characters and events therein gradually work out to have meaning—some turns more emotional than plot-driven. Regardless, Wyman’s dialogue frequently swings into corny melodrama mode when characters give long speeches about their motivations. Fortunately, his characters are morose and don’t talk much, leaving Farrell and Rapace to fill in the blanks with their pained expressions. In films like Ondine and In Bruges, Farrell has effectively rendered inner turmoil on his face, suggesting so much behind his sad eyes. It wasn’t so long ago that the former bad-boy actor was little more than a pretty face, and a performance like this demonstrates how skilled he’s become since. As for Rapace, the scars on her face are matched by the actress’ powerful presence and her character’s inner scars; she beautifully portrays Beatrice with a Phantom of the Opera-meets-Quasimodo dynamic. Cruel kids in her apartment complex call her “monster” and throw rocks, and she runs in fear, which only makes her more hell-bent on revenge.

On the reverse, Howard feels miscast as the cruel and refined crime boss; and so when Dead Man Down falls into action movie overdrive in the last scenes, Howard’s performance falls flat as he delivers his best impression of Al Pacino as Tony Montana (“Say hello to my little friend!” is replaced with Alphonse’s “I got something for your ass!”). Even though the action doesn’t quite congeal with the brooding drama of Farrell and Rapace, cinematographer Paul Cameron (Collateral) lenses some exciting shootouts. Inventive angles abound show both Cameron and Oplev have considered their film’s parallels (however thin) to Rear Window, the close-quarters shootout in True Romance, and Scarface in the finale, as suggested. Except, the film’s three-dimensional leads have loftier ambitions than this. It’s on the strength of Farrell and Rapace, their supporting cast, and the visual confidence of the production that leaves Dead Man Down a worthwhile voyage into neo-noir territory.