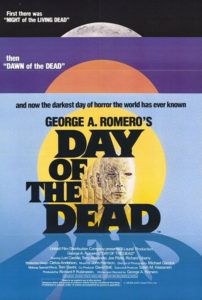 George A. Romero’s Day of the Dead is, in theory, a great zombie film. It takes hours, sometimes days or weeks after viewing the picture to finally realize that its effectively bleak message lasts. However, much about the production remains low-grade: An electronic music score by John Harrison better suits a Caribbean resort ad from the 1980s, the characters are generally unpleasant, and lousy acting spoils our otherwise devoted involvement, leaving us to compare the result to the visceral emotional experiences of Romero’s previous zombie shockers Night of the Living Dead (1968) and Dawn of the Dead (1978), which, is no comparison at all. But over the years, despite these complaints, I’ve come to appreciate Romero’s grave (pun intended) observations in his third zombie film as the most desolate he’s explored.

Set primarily in an underground military bunker, the film’s zombie apocalypse has long since dwindled down the human race on the topside. The twelve survivors, an assemblage of military personnel and civilian scientists, research for a solution to the epidemic that has (literally) consumed civilization. Bunkers in Washington D.C. have stopped communicating via radio; surveying nearby cities by helicopter, other survivors are nowhere to be found. It’s apparent within the first scenes that the characters are unhinged and slowly deteriorating, especially the soldiers. Everyone’s desperate for hope, but there’s none to be had.

What possible solution could there be when Logan (Richard Liberty), the resident Doctor Frankenstein, estimates for every human there’s four-hundred thousand undead? Nevertheless, the research continues, which requires zombie specimens for examination, which calls for the military men to corral and ostensibly hogtie Subjects of the Living Dead, risking their lives in the process. But what’s Logan doing in his lab with his experiments? What solution is he working toward?

Lines are clearly drawn between the groups: the military, led by the despotic Capt. Rhodes (Joe Pilato); the scientists, given humanist sympathy by the one woman Sarah (Lori Cardille); and pilot John (Terry Alexander) and handyman McDermott (Jarlath Conroy)—the two separatists who want nothing to do with either establishment. Rhodes declares martial law and wants results no matter how the unsuitable conditions; meanwhile his men are breaking down, overworked, and going slowly mad. The separatists, both with distracting accents (Jamaican and Irish), both careless to the world’s problems, just wish they were on a beach somewhere. Sarah finds herself struggling to find some common ground between them all, some logic they can all adhere to, but there’s none left.

Grunts Rickles (Ralph Marrero) and Steel (G. Howard Klar), along with some help from Polito’s depiction of Rhodes, almost ruin the film with their over-the-top performances. Always laughing in harsh cackles and over-emphasizing each line of dialogue, the military is given wild and uncontrollable personas, both violent and sex-obsessed, and fixated on preserving the scrap of power they retain. What results is a lot of unbearably bad discourse shouted in forced performances. Romero’s commentary on the perverse military drive suffers as a result of bad acting. And while I can appreciate that the director intended for the performances to appear fanatical and excessive, imagining other actors in the roles makes one ache for how much better the film could have been.

On the flipside, Day of the Dead features arguably the best zombie performance put to film (its top contender being Billy Connolly’s undead tour de force in Fido). Sherman Howard plays “Bub”, a zombie domesticated by Logan, proving a theory that zombies retain some memory of their former lives (an idea probed in Romero’s 2005 venture Land of the Dead). Versus trying to eliminate the zombie threat, Logan, off his rocker, wants to re-teach them, civilize them, and even reward them with good behavior. Bub is Logan’s best student, and through inches of makeup, Howard adds an underlying emotionalism to his distant zombie expressions.

Scenes with Bub make the movie something visionary, less commercial, more than just an exercise in purple dead bodies lurching about in crowds, blood oozing from every orifice, eating every living thing they come in contact with. Though, the film should be considered makeup guru Tom Savini’s masterwork. One scene above all always makes me cringe—a zombie-patient on an operating table turns on his side to reach at a potential meal, and his insides slop out onto the floor with a gooey shluck. And, of course, every Romero zombie film features an undead feeding frenzy montage at the end; this one is particularly nasty, even unsettling in its grotesqueries.

Romero’s meaning isn’t as plain as his notes on consumerism in Dawn of the Dead, or society’s burgeoning aggression in Night of the Living Dead; the director circulates over several central themes. Consider the undead a representation of the populace subject to the dementia of institutions like military and science. Or, perhaps, Romero wishes for a world in which those same institutions are overrun by the masses; certainly, his later films propose such arguments. Taking the most reflective, philosophical approach in any of his zombie movies, Day of the Dead is an imperfect work featuring big ideas, several wonderfully horrid individual scenes, and gory zombie effects unmatched in the master’s career.