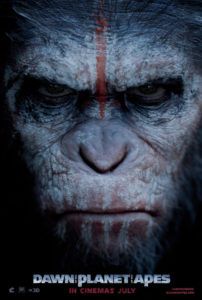 Humanity is not exclusively human, in the sense that other animals can embody the characteristics we call “human,” and therein, “humanness” loses all meaning in terms of its species-centric definition. Such is the case in Dawn of the Planet of the Apes, the continuation of the 2011 reboot Rise of the Planet of the Apes, a surprise hit that relaunched Twentieth Century Fox’s original five-film franchise that began in 1968. The film waxes philosophical about the nature of humanness as it relates to both Homo sapiens and the arguably more humane genetically enhanced talking apes. In fact, the film’s focus is less on human characters than the fascinating simians portrayed through motion-capture technology by Andy Serkis and a band of talented actors, their physical performance augmented by way of stunning CGI. Layered ape characters—whose behavior it becomes difficult to describe without using the word “human”—create a powerful message of understanding amid the clashing of two diverse cultures, and suggest there ought to be another word for the quality of humanity. It’s one of the most intelligent films of 2014, and yet, despite its lofty intellectual ambitions, never for a moment does the film skimp on its blockbuster thrills or summer movie requirements.

Married writers Rick Jaffa and Amanda Silver, who penned Rise of the Planet of the Apes, are joined by Mark Bomback (The Wolverine) in conceiving the $170 million sequel. Director Matt Reeves (Cloverfield, Let Me In) takes over directing duties from Rise‘s Rupert Wyatt and brings careful control to the proceedings, staging elaborate and exciting battle scenes and several wonderfully crafted moments of intense character complexity. His cinematographer Michael Seresin shoots in long, swooping takes and employs tempered yet effervescent colors that leap from the screen as they show a world devastated by the “Simian Flu”—the virus inadvertently unleashed on humans when Gen-Sys scientists tried to find a cure to  Alzheimer’s. Effects supervisor Joe Letteri and his team realize a San Francisco overgrown by post-apocalyptic foliage, the environment transformed into a third-world marketplace put together by production designer James Chinlund. And Michael Giacchino’s vital music builds suspense with a persistent tempo and percussion flourishes reminiscent of Jerry Goldsmith’s score from the 1968 original. But the effects work visualizing photo-real chimps, orangutans, gorillas, and other apes is truly impressive if not awe-inspiring, with Serkis’ incredibly intricate, expressive performance being the obvious standout.

Some ten years after Caesar (Serkis) led his rebellion across the Golden Gate Bridge and settled his small ape army in the Muir Woods overlooking the Bay area, human numbers have been reduced to almost nothing (1-in-500 survived according to the newscast montage during the opening credits) and ape numbers have grown by the hundreds. Caesar’s group lives peacefully in the woods; he hunts alongside his son Blue Eyes (Nick Thurston) and Koba (Tony Kebbell), the horribly scarred ape who formerly served as a test subject in countless human experiments. Caesar is a beloved and wise leader who understands humans and, as an Abraham Lincoln-esque figure, desires peaceful coexistence after his sign-speaking apes discover that a group of humans still survives in San Francisco. The humans, led by Dreyfus (Gary Oldman), who blames apes for the loss of his family to the virus (never mind that the virus was engineered by humans), live in ramshackle shantytowns in the decimated city. Low on fuel and food, their survival depends on gaining access to the O’Shaughnessy hydroelectric dam, located behind ape lines, to restore power and make contact with other human survivors.

Between the two factions of ape and human, each character has its counterpart. Caesar’s equivalent is Malcolm (Jason Clarke), who, along with his introverted teen son Alexander (Kodi Smit-McPhee) and CDC doctor girlfriend (Keri Russell)—paralleled by Caesar’s wife Cornelia (Judy Greer) and angsty son Blue Eyes—believes family and the future are important. Likewise, Koba and Dreyfus are both warmongers, ready to fight and take unnecessarily violent steps to defend their beliefs. And while becoming friends, both Caesar and Malcolm trust their own kind too much, leading to the story’s embrace of Shakespearian dramaturgy, complete with a violent coup and successions of the throne. The writers tap into Julius Caesar, as one would expect, but also elements of Romeo and Juliet, with star-crossed lovers of sorts (friends Caesar and Malcolm) caught amid their families’ hatred for one another. Indeed, Koba questions Caesar’s orders more than once, such as when his leader allows the humans to continue their “human work” on the dam. Koba points to scars on his torso, arm, and badly marked face: “Human work,” he reminds Caesar. Koba is easily the film’s most intriguing character; at first, he’s a loyal subject, but soon his cage-born hatred for humans overcomes him and drives the ensuing combat.

Before the film unfolds into an all-out war with fantastically realized action sequences on city streets and high above in skyscraper scaffolding, fascinating moments where the acting and special FX shine gradually build tension. Koba investigates a human stockpile of weapons guarded by two dim-witted humans that see him as a performance monkey, and Koba plays the part in a charming deception with a hint of danger under the surface—these are brilliant scenes, and the effects here are unbelievably good. Never for a moment does the audience question the actual presence of the apes onscreen, despite them being CGI creations. It’s also a testament to Serkis and Kebbell that their characters remain the most mesmerizing and dramatically complicated onscreen. If there’s any quibble to be made about Dawn, it’s that the humans feel comparatively underdeveloped and two-dimensional; fortunately, actors like Clarke and Oldman have a presence that goes a long way. To be sure, this is Caesar’s story, his narrative arc, and all focus is directed on his emergence as an almost Christ-like figure (Reeves channels Rembrandt’s Hundred Guilder Print etching in the final scene).

While the strains of animal rights activism were none-too-subtle but welcomed in Rise, the subtexts in Dawn range from extremist environmentalism to pro-gun control, as ape sympathies are lessened by the ape-driven fallout between the two species. Caesar tells his son, Blue Eyes, “I always think ape better than human… I see now how like them we are.” Still, the scales of compassion tip toward the apes and, by the end, the film suggests this is just the beginning of a larger conflict between apes and innately violent humans, which will undoubtedly be explored in a sequel. Dawn of the Planet of the Apes has already been likened to The Empire Strikes Back by many critics, which implies not only that Dawn is superior to Rise as Empire was to Star Wars, but also that the darkest days are behind for Caesar—both are debatable implications. The merits of this follow-up are not necessarily superior to its predecessor, just different, and delivered with as much precision and naturally widening scope as one would hope for from a Hollywood sequel. And even darker, more explosive days would be ahead for Caesar if this series is building up to something resembling The Planet of the Apes. As it stands, this is a triumphal continuation in the series and an impressive achievement both viscerally and conceptually, with a profound degree of humanity—or whatever you want to call it—embedded into the narrative.