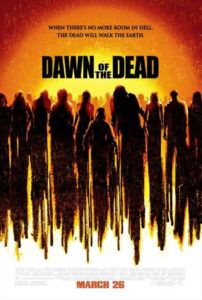 Let’s pretend George A. Romero’s 1978 cult classic Dawn of the Dead isn’t one of my favorite movies. And make-believe that remaking classics doesn’t bother me. With this in consideration, Zack Snyder’s remake Dawn of the Dead is one of the zombie subgenre’s most welcomed surprises. Setting aside the commentary that zombies are likened to mindless consumers, Snyder reimagines his source text, wipes it clean of allegory and its detailed narrative, and instead offers a taut action picture that contains enough interesting characters and graphic horror to make any devotee of Romero’s film question their allegiance.

In the earlier version, two cops and two civilians hole-up in an abandoned shopping mall to hide from a breakout of zombie plague. They clear out the mall of any remaining zombies—undead walk about stores to the still-playing muzak on the overhead speakers, mindlessly drifting like shoppers on a weekday afternoon—and make it their home, living off the goods inside and protecting it as their livelihood. Our four heroes are tightly drawn personalities, each slowly dwindling away from their isolation and growing obsession with their acquired wealth. All at once, their hideout is exposed and trashed by a massive gang of looting bikers, a sour representation of human greed that steals and kills everything in sight, zombie or otherwise.

Abandoning these keen observations on consumerism and human savagery, James Gunn’s script (assisted by an uncredited doctoring by The Lookout and Minority Report scribe Scott Frank) places characters inside a mall during a zombie epidemic, and that’s about where the similarities end. All of the events within the mall take place on their own horrifying terms. More characters allow greater opportunity for more to become lunch. And the seemingly endless string of suspense-driven trials gives the audience little time to catch their breath.

Even the zombies themselves have been changed. In Romero’s version, his undead were blue-skinned and splattered with bright red blood, staggering along at a dawdling slag, accentuating his intended comic book imagery. Snyder, taking a cue from Danny Boyle’s zombie reinvention 28 Days Later (2003), offers ripe and realistic gore decorated onto zombies that sprint at an unrelenting pace. Romero’s films, always showing zombies as varying metaphors for the populace, generated more fear from a crowd of living dead, versus one or two that could be maneuvered around. Here, one zombie can run a character down, making every last one of them a frightening threat.

Set in Everett, Wisconsin, the film never bothers with an explanation to the zombie outbreak—whether made by a virus, contagion, super-Rabies, or what-have-you—it simply begins overnight. Sarah Polley plays Ana, a nurse who amid the initial chaos meets up with disillusioned police officer Kenneth (Ving Rhames). Along with natural born leader Michael (Jake Weber) and expecting couple Andre (Mekhi Phifer) and Luda (Inna Korobkina), the group makes their way to a nearby mall for safety. Abandoned, save for weary and controlling mall security guards (Michael Kelly, Kevin Zegers, and Michael Barry), the aptly-titled Crossroads Mall provides clothing and food and doors with shatter-proof glass, making it the perfect safe-haven for survivors of a zombie apocalypse… Keep that in mind the next time one occurs.

Simply hiding out isn’t an option when a truck bearing other survivors arrives. Most of them are one-note characters barely worthy of description, their only purpose to increase the eventual body count. Our sympathies remain with the initial group, namely Ana and Michael’s burgeoning romance, Andre and Luda’s coming child (which turns terrifying results), and Kenneth who communicates by dry-erase board and binoculars with a gun shop owner a couple hundred yards away, an ocean of undead between them. Less straight horror than ghoulish action, the survivors outgun the thousands of flesh-eating dead by arming themselves to the teeth, building makeshift tanks out of mall shuttle buses, and blowing up propane canisters. The result is an action movie positioned in the bloodiest of horror settings.

Snyder’s direction is fast-paced but not choppy, and given visual distinctiveness with enough filters and saturations that we can see there’s a talented filmmaker at work. Snyder would later helm Frank Miller’s 300, an over-directed and overrated film if their ever was one, and the upcoming adaptation of Alan Moore’s Watchmen. Despite having to endure the occasional slow-motion bullet shell ping on the ground at an insistently measured pace, Snyder’s work on Dawn of the Dead will always keep me interested in his next project.

After the 2004 remake’s victory at the box-office, coupled with the successes of the aforementioned 28 Days Later and Edgar Wright’s brilliantly funny Shaun of the Dead (also in 2004), Hollywood got wind that audiences wanted zombies. The next year, Universal Studios brought back the master George A. Romero to make his first zombie film since 1985’s Day of the Dead. A political metaphor entitled Land of the Dead, Romero’s return, fuelled by Snyder’s remake, thankfully created new demand for zombie pictures. But then Hollywood got greedy and couldn’t resist overkilling the movement with enough direct-to-video garbage (such as this year’s Day of the Dead remake) to make a person almost regret its resurgence. Luckily, Romero is still turning out fine pictures (see Diary of the Dead) and occasionally something wholly entertaining comes along (see Fido or 28 Weeks Later) to make it worth suffering through a few bad renditions. Snyder solidified this re-popularization with his commercially viable, incurably watchable expert action-horror, one of my personal (however unlikely) favorites in the realm of zombie filmmaking.