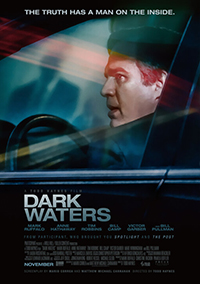 Dark Waters has an opening scene reminiscent of the one in Jaws. A few drunk and horny teenagers take off their clothes for some late-night skinny dipping, making a lot of noise as they splash about. An underwater camera, submerged in an oddly blue pond, follows the swimmers like a predator. The only thing missing is John Williams’ propulsive two-note theme. The scene even takes place in 1975, the same year that Steven Spielberg’s shark film debuted. But instead of a giant fish chomping down on a midnight snack, the monster is a mysterious blue compound dumped into the water by DuPont. The human-made chemical perfluorooctanoic acid (PFOA), also known as C8, was developed in the 1940s and would be used in countless household products, including Teflon. It’s also been proven to cause cancer, birth defects, and other diseases. The film’s killer takes its prey by poisoning them, leaving blackened teeth, bloated internal organs, and visible lesions that emerge over several years. At least the shark put its victims out of their misery after a few quick bites.

Directed by Todd Haynes, Dark Waters is a true whistleblower story about defense attorney Rob Bilott’s ongoing legal battle with DuPont over dumping toxic, unregulated substances that have since made their way into the bloodstream of nearly every human being on the planet. It’s a harrowing and unlikely project for Haynes, whose film follows in the tradition of All the President’s Men (1976), where an entrenched investigation of corporate documents and justifiable paranoia leads to the truth. Mark Ruffalo, who has been preoccupied with the MCU for nearly a decade, stars as Bilott, and he produced the film as a passion project. The actor gives a nuanced, internal performance as a corporate defender for Taft Stettinius & Hollister, a Cincinnati law firm that takes the case of Wilbur Tennant (Bill Camp) in 1998. A family friend who runs a farm where Bilott played as a boy, Tennent asks for the protagonist’s help to sue the local DuPont plant for burying dangerous chemicals that he suspects killed 190 of his cows. But what begins as a routine discovery hearing turns into a contentious and frightening conspiracy.

The film creates a growing sense of unease as Bilott, who at first feels obligated to take the case, uncovers that Tennant’s entire town of Parkersburg, West Virginia, may have been exposed to DuPont chemicals. But when he tries to raise the issue with Phil Donnelly (Victor Garber), an exec at the company who has worked closely with Bilott’s firm in the past, our hero discovers the lengths they will go to protect themselves. Dark Waters becomes a predictable sort of David & Goliath story, where the hunched and glowering Bilott must somehow convince everyone—his boss (Tim Robbins), the EPA, the courts—that an evil corporate entity has knowingly exposed everyone to C8. It’s a battle that begins in 1998 and doesn’t resolve itself until 2015, locking Biliott into a long and painful process of research and court appearances that take a toll on his health and his marriage. Anne Hathaway plays Bilott’s wife, Sarah, in a larger-than-life performance ill-suited for Ruffalo’s more muted presence. Though she overacts every scene, it’s difficult not to feel choked up when she explains that, after her husband’s endless battle with DuPont, he just needs to be told, “You did good.” 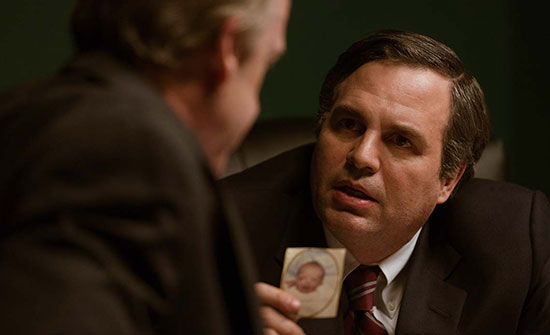 Mario Correa based his screenplay on Nathaniel Rich’s 2016 article, “The Lawyer Who Became DuPont’s Worst Nightmare,” published in The New York Times Magazine. Haynes, usually more experimental and on the margins, takes a director-for-hire job here and adopts an air of 1990s-brand commercial filmmaking (that’s meant as a compliment). And so, he and cinematographer Edward Lachman create a visual style reminiscent of Steven Soderbergh in the late 1990s, shooting at many of the actual locations, such as the Taft Stettinius & Hollister offices, with a distinct color palette of gray suits and overcast skies. The persistent blue hue throughout Dark Waters seeps into the film like the poison seen in the opening sequence, serving as a persistent reminder that each one of us has been exposed to the long-chain fluorocarbon, developed during the Manhattan project, which DuPont allowed to infiltrate homes around the world. Not unlike Soderbergh’s Erin Brockovich (2000), there’s an undercurrent of outrage over the negligence, greed, and corruption on display. At one point, Bilott reads from a corporate report that worries about exposing the truth, as it would “basically put the financial viability of this product segment on the line.”

There’s something appropriate about Dark Waters having a late-1990s look, as those years featured several whistleblower films that doubtless influenced Haynes. A Civil Action, about a prolonged court case involving the presence of a chemically engineered compound in the public water supply that’s poisoning people, opened in 1998 and serves as a mirror to this film. Michael Mann’s brilliant The Insider came out in 1999, telling the story of a tobacco industry whistleblower. And while Haynes’ film plays like a familiar kind of thriller from this era, it also bears a striking resemblance to some of his earlier films—most obviously Safe from 1995, in which Julianne Moore plays a woman driven to the brink by her chemical sensitivities, which may be either real or psychosomatic. Less apparent is how Dark Waters fits into Haynes’ exploration of closed-off worlds, wherein the individual’s struggle for recognition emerges as a central theme in Velvet Goldmine (1998), Far From Heaven (2002), I’m Not There (2007), and Carol (2012). His latest may occupy a more conventional mode and genre than anything else he’s made, but the film unquestionably has the director’s stamp.

Of course, the environmental implications explored by Dark Waters, especially in the haunting postscript, turn it into political filmmaking, propelled by Ruffalo’s activism and championing of Rich’s article. It’s a film that raises questions about the personal responsibility of those involved—and not only the corporation that values billion-dollar profits over human lives. The townsfolk of Parkersburg defend the company as “good people,” but their silence has been bought. The enduring question of the film notes how the EPA creates policy but also allows companies to self-regulate. Bilott, in one of the film’s many impassioned speeches, wonders how much can be overlooked or hidden in a system of self-regulation that requires whistleblowers to come forward when something looks awry. Perhaps the most successful part of Dark Waters is how it portrays American society as one that fears doing the right thing because of the repercussions, while it’s far easier just to keep quiet, blissfully unaware, and toe the line, however unpleasant. And yet, when someone like Bilott or Tennant swims against the current, it can’t help but become a moving story.