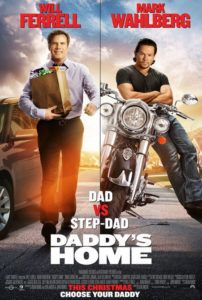 Although the duo of Will Ferrell and Mark Wahlberg proved effective in their 2010 hit The Other Guys, they fail to replicate that magic in Daddy’s Home, an undercooked comedy by Horrible Bosses 2 director Sean Anders. Here’s one of those comedies like Meet the Parents where an awkward family situation escalates, and everyone onscreen behaves so farcically that their inane behavior can only be explained by the requirements of the script. Brian Burns, John Morris, and Anders penned this predictable mess, which pits a sensitive stepdad against the rebellious and “cool” biological father in a competition for the children’s love. Antics ensue and fail to be entertaining, much less funny.

Ferrell plays Brad, an affable fella and husband to the beautiful Sarah (Linda Cardellini), whose children, Megan and Dylan (Scarlett Estevez and Owen Vaccaro), initially receive their new stepdad with outright disdain. After a few months, they begin to warm up to him, but that’s when the family gets a call from Dusty (Wahlberg), Sarah’s first husband. An irresponsible, buffed-up bad boy with a leather jacket and a motorcycle, Dusty preys on Brad’s good nature, and even convinces Brad to allow him to stay inside the house. If that extremely stupid idea isn’t enough, just wait until Brad invites Dusty along to his work at a smooth jazz radio station. Much of the movie proceeds like this, with Brad making a string of impossibly bad decisions regarding family boundaries, extending the comedy to eye-rolling absurdity.

Consider when Dusty is, for no discernable reason, allowed to come along when Brad and Sarah visit a fertility doctor. The doctor (Bobby Cannavale) also happens to be a good friend of Dusty’s. And so, to demonstrate for Sarah what’s wrong with Brad’s testicles (damaged after an X-ray accident that left them “more decorative than anything else”), the doctor invites Dusty into the exam room to show her how testicles should look, and apparently Dusty (his genitalia offscreen, thankfully) is hung like Dirk Diggler. It’s one absurd setup like this after another, where Brad is consistently reminded that Dusty is more of a man than he. At any moment you expect Brad will offer up his place in Sarah’s bed to her first husband simply because Dusty asks.

Meanwhile, the talented Cardellini is saddled with a role that teeter-totters between her first and second husband as the script sees fit. Rather than support Brad or put her foot down and kick Dusty out, the character stands by, hands on her hips, doing what the writers tell her. This kind of finger-wagging mom character would be thankless for any actress. Ferrell’s role is thankless too, just like all the roles in Daddy’s Home. As Brad grows increasingly paranoid and worried about losing his family, his behavior becomes more pathetic, more erratic, and more ridiculous as the movie goes on, allowing Ferrell to become the butt of countless emasculating jokes. Wahlberg plays a slab of meat. Thomas Haden Church and Hannibal Buress play Brad’s boss and a live-in handyman, respectively.

Daddy’s Home feels like an idea conceived as a commercial prospect. “Imagine if Will Ferrell and Mark Wahlberg were competing dads,” one studio exec says to another. “It sounds like comic gold. We can’t lose!” But from there, everything went downhill. The concept’s possibilities never live up to their potential because everyone involved is on autopilot, showing up for the paycheck. And however intentionally transparent the movie’s product placements for Cinnabon, the Ford Flex, Miracle Whip, and Red Bull may be, it’s clear who’s signing those checks. This is a lazy studio effort from Paramount Pictures, obviously assembled for money, and therefore insulting when it tries to be heartwarming.