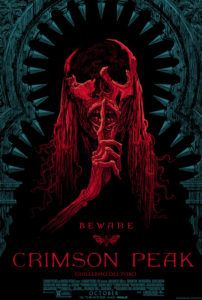 Sumptuously detailed and ornamented, Crimson Peak lays the foundation for a macabre romance of intricate costumes, set pieces, and special effects in the tradition of classical gothic style. The visionary Guillermo del Toro takes a welcomed rest from superheroes and giant monster-fighting robots, returning to his roots in dramatic horror, where he has long balanced fantastic elements with realism, like The Devil’s Backbone (2001) or Pan’s Labyrinth (2006). By telling the same kind of stories that have made del Toro’s name synonymous with artistry and emotion, but doing it in this gothic setting, the director creates a vital link between his own work and that of gothic masters. It’s impossible to screen Crimson Peak and not think of Ann Radcliffe’s novels The Mysteries of Udolpho (1794) and The Romance of the Forest (1791), or later works by Mary Shelley and even Jane Austen. And while del Toro’s technical touches evoke everyone from F.W. Murnau to Alfred Hitchcock, this gothic romance of dark passions and long-held secrets assembles into a lovingly made guidebook to the filmmaker’s style and influences.

Del Toro channels several influences through a story structure that has followed him since his feature debut in 1993, Cronos—among its characteristics, the gothic notion that the once privileged have since decayed into cruel, sad, and terrifying specimens. And the apparitions haunting them become heavy symbols for psychological torment. He draws his protagonist, the smart, young Edith Cushing (Mia Wasikowska), from half a dozen Austen protagonists, being an independent if sheltered woman who reads much and has an affinity for ghost stories. Her love interest is Sir Thomas Sharpe (Tom Hiddleston), a mysterious if romantic Englishman who becomes her tall, dark, and handsome Mr. Rochester. Only Thomas isn’t a solo package; he comes with an older sister, Lady Lucille Sharpe (Jessica Chastain), who recalls the jealous and cruel Mrs. Danvers (Judith Anderson) from Alfred Hitchcock’s Rebecca (1940). Speaking of Hitchcock, there’s also a poisoning subplot in Crimson Peak that cannot help but be compared to Notorious (1946).

While incorporating familiar narrative tropes from both his own work and gothic literature, del Toro proves once again with Crimson Peak that he is one of today’s finest visualists. He relishes in expressive, dark details, from architecture to the computer-generated effects that bring red, nearly transparent ghosts (back) to life. Production designer Tom Sanders follows del Toro’s sketches and designs, rendering ornate interiors of elaborate carvings and equally intricate dilapidations with flourishes of timeworn rot. Director of photography Dan Laustsen lenses the film with high-contrast lighting, gels of blue and green, and sometimes old-fashioned camera tricks, such as iris wipes that fade to black by zeroing-in on a specific object. The technical efforts capture beautiful, bloody facets from start to finish, both haunting and visually stunning. Costumer Kate Hawley dresses her actors in flamboyant gowns and suits, less historically accurate than what the imagination of a late-night reader might dream up with their nose in one of Radcliff’s books (like Catherine in Austen’s novel Northanger Abbey). 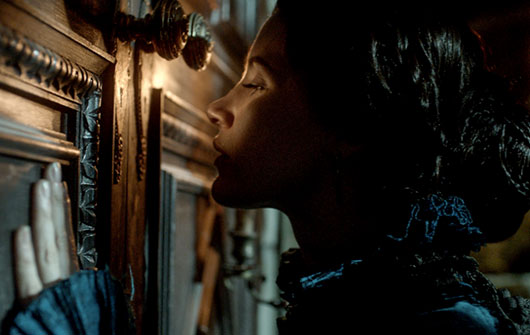 Del Toro’s story, penned by the director along with Matthew Robbins, embraces these traditions and many more, but the first lines still recall del Toro’s own work more than any other. “Ghosts are real. This much I know,” says the voice of Edith, who learns early in life that ghosts sometimes appear to her and issue warnings. Similar avowals have accompanied other del Toro works. And just as in The Devil’s Backbone, ghosts appear when wronged, their wounds of life leaking out into the air as they confront Edith with their pale eyes. In this film’s case, the spirit of Edith’s recently departed mother warning her about “Crimson Peak”, although Edith does not yet know what that means. The only daughter of a wealthy, widowed industrialist Carter Cushing (Jim Beaver), Edith wants to write gothic fiction and shows a book manuscript to her father’s publisher friend, who thinks she should write love stories instead. “The ghosts are just a metaphor for the passage of time,” she explains. To be sure, Edith isn’t like other women in her home of Buffalo, New York, something instantly noticed by Thomas. And through Edith’s fascination with gothic romances, del Toro hopes to realign the audience’s expectations. This is not one of today’s paranormal shockers; it’s something we haven’t seen for a long time.

After the mysterious death of her father, Edith agrees to marry Thomas and they move to his estate in Cumbria, England. Allerdale Hall rests on the titular peak, so-named for the red clay that resides underneath the ramshackle estate. When it snows, the red seeps through the white snow and looks as if saturated in blood—a creepy and symbolic image of the carnage that has been buried among the mansion’s bones. But this is after Carter hires a private investigator to look into Thomas and Lucille’s past, and after much ambiguous scheming is had by (and much suspicion is built up about) Thomas and Lucille. Indeed, what Carter finds out gets him killed. By establishing a ghostly warning about Crimson Peak early in the proceedings, the audience is saturated in a sense of dread and many viewers expect a ghost-centric plot. However, as with del Toro’s other similarly themed films with fantastical elements, the humans are often the worst monsters of all, whereas the fantastical creatures represent an emotional projection or reflection of the protagonist. Trapped in the isolated estate, which gradually sinks into red clay that leaks through the walls and drips like blood, Edith finds herself poisoned and likely doomed, ghosts warning her about her possible demise—a representation of what will happen to her if she’s not careful.

Much as Judith said of her own manuscript, Crimson Peak is more a love story that just-so-happens to feature ghosts, just as The Devil’s Backbone and Pan’s Labyrinth were each about children who escape the real-life horrors of the Spanish Civil War by getting caught up in fantastic stories. As this point is underscored in both Edith’s assessment of her own writings and the opening narration, the screenplay could hardly be called subtle. And yet, as I left the theater after my screening, I overheard other viewers claiming they were disappointed by the film’s lack of ghosts and scares. Evidently, they had missed the point. Perhaps the distributors at Universal Studios should have marketed the picture less as a spooky thriller (released a few weeks before Halloween, no less) and more as a gothic romance. Then again, del Toro renders ghosts as horrifyingly contorted things and he doesn’t shirk away from copious amounts of bloody violence either—characteristics of a horror yarn. Nevertheless, the emotional core of the story remains a romantic tragedy, complete with a dashing hero in Edith’s longtime friend and suitor young doctor Alan McMichael (Charlie Hunnam, whose character seems to parallel that of Scatman Crothers’ in Stanley Kubrick’s The Shining).

Del Toro’s work on Crimson Peak does not feel as elegant as his aforementioned Spanish-language horror dramas, perhaps because he’s so wrapped up in achieving a huge visual spectacle for the viewer. For some, the glorious visuals may be distracting next to a plot constructed almost exclusively of tropes found in other source material, and so perhaps for some it will take another screening to fully appreciate, soak in the details, recalibrate expectations, and appreciate the drama. What’s unmistakable is that del Toro has made excellent use of his cast, particularly the charming Hiddleston as Thomas. Best in show is Chastain, whose boiling-under-the-surface intensity explodes into frighteningly psychotic bursts that, regardless of being an all-around impressive performer, she seemed incapable of before. Along with Wasikowska as another affable, misunderstood young woman (see almost every credit to her name for other examples), the cast helps pull our attention away from the amazing visuals and return us to a familiar, if still juicily engaging gothic tale, tenderly assembled from del Toro’s unmistakable vision.