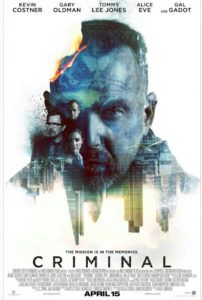 Ryan Reynolds completes an unofficial body-swap trilogy with Criminal, following his gross-out comedy The Change-Up (2011) and last year’s overcooked sci-fi actioner Self/less, both in which his mind is placed into another’s body or vice versa. Much the same happens in Criminal, a dull, yet star-studded production that feels like a 1990s action movie throwback—complete with over-the-top villains, ruthless violence, and an absurd premise. Perhaps that ’90s quality comes from screenwriters Douglas Cook and David Weisberg, who were responsible for The Rock (1996) and Double Jeopardy (1999). Cook and Weisberg haven’t had a script produced for seventeen years, and Criminal demonstrates why. It’s any wonder why a skilled cast comprised of Reynolds, Kevin Costner, Gary Oldman, Tommy Lee Jones, Alice Eve, and Michael Pitt would subject themselves to such nonsense, aside from a paycheck.

In the jumbled opening scenes, London-based CIA agent Bill Pope (Reynolds) finds himself tracked, captured, and tortured to death. Pope’s superior, Quaker Wells (Oldman), is the kind of movie chief whose irrational orders don’t make any more sense just because he shouts every line of dialogue. Upon learning of Pope’s death, Wells contacts Dr. Franks (Jones), a researcher who has successfully transferred the memory of mice from one subject to another. Since Wells needs some crucial information out of Pope’s now-dead brain, he needs the late agent’s memories uploaded into someone who fits Dr. Franks’ criteria—specifically, someone with dormant sections of their brain. Enter madman prisoner Jericho Stewart (Costner). Jericho suffered a childhood trauma that left his frontal lobe undeveloped, but it also left him devoid of emotion or a sense of right and wrong. That untrained portion of his brain makes him perfect for Dr. Franks’ process, which involves placing Pope’s memories and emotions into Jericho’s brain.

Why does any of this matter, you ask? “Spanish Anarchist” Xavier Heimdahl (Jordi Mollà), whose name sounds less like a villain than a Marvel character, seeks full access to the U.S. military infrastructure. A hacker-for-hire named The Dutchman (Michael Pitt) has used an advanced worm to access the vast arsenal, and he’s saved the program on a flash drive. In all his anarchistic villainy, Heimdahl wants to bring down all earthly governments for reasons not worth exploring in this review. His Master Plan is more about being maniacal than maniacally logical. Before he died, Pope hid The Dutchman in an undisclosed safe house, so now there’s a race between Heimdahl and the CIA to find him. Unfortunately, before the CIA can extract the necessary information to stop Heimdahl, Jericho escapes and begins to wreak havoc with his newfound skills from Pope’s memory. Of course, Jericho also begins to have emotions for the first time, mostly centered around Pope’s widow (Gal Gadot) and daughter (Lara Decaro), the latter of whom inexplicably takes a shine to Jericho.

Costner’s performance begins as a gruff-voiced caveman guided by basic drives like hunger and dominance. Director Ariel Vromen (The Iceman, 2012) stages scenes that attempt humor around Jericho smashing innocent people in the face when he’s hungry or needs something, but they fall flat (both the scenes, and the people Jericho punches). Jericho’s more animalistic traits are unintentionally laughable in Costner’s hands, while he gets better as the character finds emotional grounds for his behavior. Oldman and Jones are utterly wasted in their clichéd roles, both reduced to shouting and expository dialogue. Female characters like Gadot, Alice Eve’s CIA agent, and Heimdahl’s top henchwoman played by Antje Traue are nothing more than dressing to the male characters. Worst of all, Mollà seems to be working three decades too late; he would have been right at home facing against the likes of Sylvester Stallone and Jean-Claude Van Damme in their prime.

With names like Jericho Stewart, Quaker Wells, and Xavier Heimdahl, the audience feels as if we’ve been transported back into 1997’s Face/Off—home of names like Castor and Pollux Troy. Moreover, Face/Off clearly provided some inspiration for Cook and Weisberg’s script, where the criminal becomes the hero to stop a terrorist and so forth. However, Vromen also reaches for something similar to Frankenstein, where the monster becomes a man. Those themes are underplayed in favor of tedious chases and shootouts, filmed on location in London with shaky, uninspired camerawork by d.p. Dana Gonzales, and cut to pieces by editor Danny Rafic. The filmmakers clearly wanted to create a sequel, as in the last scenes Oldman’s CIA chief cheesily announces, “I’m going to give [Jericho] a job!” Given the result of Criminal, this critic suspects Jericho will remain unemployed, at least by Hollywood.