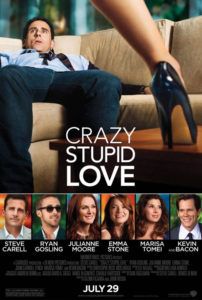 Though obnoxiously punctuated, Crazy, Stupid, Love. doesn’t fall prey to many of the unfortunate downfalls prevalent in your typical romantic comedy. At the outset, one notices how the characters in Dan Fogelman’s screenplay behave as though some thought was put into them. They’re not quite three-dimensional or developed on every level, but they’re not used as mere comic devices to propel a series of wacky rom-com antics, either. It’s a multigenerational love story in the vein of Love, Actually, except with fewer characters and all more interrelated that Richard Curtis’ mosaic. Glenn Ficarra and John Requa directed the film, and their adept handling of a mature, raunch-free script that earned $80 million at the box-office implies that audiences will flock to a smart romance if only Hollywood would produce them more often.

In the opening scene, the 25-year marriage between Cal (Steve Carell) and his high school sweetheart Emily (Julianne Moore) comes to an end when she abruptly asks for a divorce, confessing she’s slept with a coworker, David Lindhagen (Kevin Bacon). Devastated, Cal moves into an apartment and begins spending his nights in a posh cocktail lounge, where his sad sack demeanor is noticed by Jacob (Ryan Gosling), a ladies man capable of going home with any woman he chooses. Jacob observes this rather pathetic man’s cheap wardrobe and self-defacing behavior and offers to help Cal rediscover his manhood. Cal agrees, and we’re taken through back-to-back montages, one involving the makeover and another where Cal uses what he’s learned to bed a series of attractive women, including Marisa Tomei’s brief but comical role as a wily, five-years-sober alcoholic duped by Cal’s use of Jacob’s come-on lines.

Meanwhile, Jacob finds his womanizing ways fading away as he falls for Hanna (Emma Stone), who holds out for her flaky boyfriend to propose until his intentions become clear. Then there’s Cal’s 13-year-old son Robbie (Jonah Bobo), who declares his love for the 17-year old babysitter, Jessica (Analeigh Tipton), and insists they are soul mates. In turn, Jessica harbors a schoolgirl crush on Cal. All the while, Emily begins to regret her decision of leaving Cal, even though she’s had a few dates with the homewrecker. Likewise, despite having his pick of any young woman he wants, Cal misses his home, sneaking into his former yard at night to trim the hedges. And though this may sound like a lot of characters within various interconnected ties, Ficarra and Requa create a successful balance, with obvious emphasis put on Cal’s story.

Carell is likable, per usual, playing a low-key comic role without stretching his talent too far; as in Little Miss Sunshine or Dan in Real Life, the actor is good at being woeful yet funny. Moore’s performance is more subtle, relying on diverse yet readable shifts between being heartbroken and regretful. Given Hollywood’s propensity for love stories about younger people, it’s strange (yet entirely welcome) that Carell and Moore take center stage over both Gosling and Stone. Having starred in Easy A and The Help, this material seems right up Stone’s alley, whereas Gosling is usually associated with more dynamic films. Granted, his performance may not be as complex as his other two releases from 2011 (Drive and The Ides of March), but his character has some interesting layers, so you could hardly say he’s slumming it here.

What I like best about Crazy, Stupid, Love. is the structure, how seemingly frivolous subplots come together and inform the others in crucial ways during a hilarious screwball climax. The inclusion of Robbie’s crush may feel like mere catering to younger audiences, but there’s a significant connection in how Cal met Emily when they were just teenagers, and how for some a soul mate really does exist, regardless of when they meet. Of course, these themes come to fruition through typical rom-com means, including the oft-used scene where one party declares their love in a grandiose speech for another in front of a crowd, allowing for plenty of Awww reaction shots. But I may be biased on this point, having met my wife and soul mate as a teenager (although no grandiose speech was made in our case). Then again, there’s a good chance individuals locked in a disgruntled relationship or cynical toward the prospect of true love may not find the proceedings as wistfully heartwarming.

Unfortunately, after a crucial “twist” of sorts, certain characters are left at the wayside as it becomes clear who the film is really about. Rather than giving everyone their equal share, Fogelman’ story tends to treat Jacob and Hanna as supplementary roles, whereas given the appropriate screen time their relationship could have been just as significant as Cal and Emily’s, the film’s unabashed centerpiece. Alas, with these mosaic movies, rarely does every character get their due. But this is a minor quibble for a very funny, very romantic movie chocked full of feel-good aspirations. Its characters are treated with dignity within the conventions of the genre, instead of the genre compelling the characters to behave in outlandish and silly ways, and for that we must be grateful.