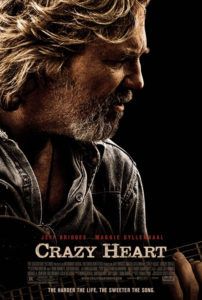 Consider all the times you’ve seen a movie about a broken down something-or-other who, just after reaching rock bottom, pulls himself up again to achieve a poignant redemption. Now consider Crazy Heart, the film where Jeff Bridges plays a grizzled country music veteran whose long life of booze and regret are catching up with him. The notion of a washed up country singer is formula in the music itself, not to mention its tradition in cinema. But consider how all the clichés evident in the film withdraw from the surface, how it allows Bridges’ performance to wash over you, and how the wonderful production simply nullifies any notice of the conventions in the story.

Bridges plays Bad Blake, a country singer whose good ol’ days are long behind him. In the first scene, when he steps out of his rusty but reliable pickup, his only means of transportation, he surveys the location of that night’s gig, a shoddy bowling alley. He knows it’s a lousy venue, but he needs the money, which is spent on whiskey and cigarettes. Touring the southwest, he’s become accustomed to performances in dives for appreciative audiences. Having been married five times, he’s a ladies man, using his small celebrity to maintain an ongoing parade of one night stands. He doesn’t write new material, so there are no new albums. But Blake’s former apprentice-turned-superstar Tommy Sweet (Colin Farrell) wants Blake to go on tour with him; still bruised from being outshined by his student, Blake refuses.

Years of alcoholic contentment and self-deprecation change when he meets Jean Craddock (Maggie Gyllenhaal), a Santa Fe journalist who interviews him at first, but he quickly falls for her and her four-year-old son, Buddy (Jack Nation). Jean remains hesitant to commit to Blake, because it’s obvious that he’s a drunk, genial though he may be around her and her son. Being around a family reminds him of his own twenty-eight-year-old son who he abandoned long ago. Perhaps he can turn everything around, make a family with Jean and make up for lost time with his forgotten offspring. His longtime bartender friend (Robert Duvall) seems to think so. Then again, Blake has decades of drinking behind him and just as much sorrow, which are problems that won’t allow him to improve his situation until they’re addressed.

Notice how each plot point mirrors one in The Wrestler, and yet the film is so good it doesn’t feel copied in the least. Based on the novel by Thomas Cobb, the film was adapted, produced, and directed by first-time helmer Scott Cooper, himself an actor. Prior to its release, the film remained in distribution hell until Fox Searchlight, the distributors of last year’s Slumdog Millionaire, as well as dozens of fine small-fry pictures, picked it up. Country Music Television originally backed the film and Cooper shot it for a mere $7 million. Paramount Vantage purchased the distribution rights for release on a secondary market, either cable TV or direct-to-video. But after the talk surrounding Bridges’ performance, Fox Searchlight saw the potential, swooped in to take over, and now Bridges has an Oscar nomination and a likely win.

It’s a much-deserved award should he take home the statue. Bridges doesn’t merely perform here, he embodies, and without making the character into just another pitiful movie drunk. Around him, his costars Gyllenhaal (another Oscar-nominated performance), Duvall, and Farrell all give their roles depth. Duvall especially feels well-placed in his role, having played a comparable part in Tender Mercies in 1983 for which he won an Oscar. But Bridges transcends all that. There’s a moment early in the film when Bad Blake sits down at the bar in his bowling alley gig, and for a moment the shot recalls one in The Big Lebowski. That’s where the comparison ends, because Bridges simply disappears into the role. When he parks himself in that familiar scenery, we don’t see The Dude or Jeff Bridges—we see Bad Blake. Bridges has played characters like this all-time-low type before, most notably in The Fisher King, except none of them have the same sense of drained and desperate humanity that he displays here.

If for nothing else, see Crazy Heart for the performance; although there are plenty of other reasons to give it your time. The soundtrack, for instance, doesn’t sound like Hollywood artificiality. T Bone Burnett’s original country songs lend an authenticity to Bridges’ performance, as they feel derived from someplace painful, and they’re beautifully sung by the actor. The very real music allows the audience to consider its meaning and the layers it adds to the actor’s performance, as opposed to the quality of the lyrics or melody. How many made-for-movie songs have spoiled a potentially good fictional musician biopic? But this is music we believe. And second only to Blake, it’s the main character of a film that defies every opportunity it has to be mediocre.