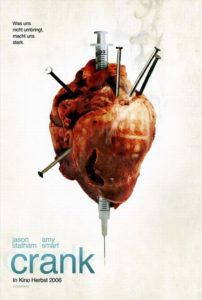 Crank is one of those movies where the posters are better than the actual film. If the writer-director team of Mark Neveldine and Brian Taylor would have put equal amounts of creative effort into the movie’s marketing department AND its production, the film might have been worthwhile. Instead, this seizure-of-a-film fails to spark any interest beyond oddity, except, perhaps, to meth addicts who might understand the jittery camerawork and nonsensical plot better than I ever could. In fact, months before the film’s release, I remember seeing the movie poster and thinking, Wow, what balls that poster has! Little did I know the outcome was one big, violent, pointlessly explicit Mountain Dew commercial.

In the opening scenes, the annoyingly-named badass Chev Chelios (Jason Statham) is poisoned with a “Chinese cocktail.” The poison slows down his heart, and he’ll eventually die unless he counteracts the drug by pumping adrenaline through his system. There’s no cure for the poison, so he’s a goner no matter what. But he vows to keep going, if for no other reason than revenge. Sounds exciting, right? The potential here begs for a wowing action film. Chelios realizes it’s difficult to maintain an adrenaline high to survive, so he resorts to snorting cocaine, using nasal spray (which contains the artificial adrenaline drug epinephrine), random violence, fast driving, and even sex to spark those adrenal glands.

At one point, in a cab, Chelios asks the driver to turn up the radio. The cab driver blasts the station and Chelios begins to wildly headbang to “Achy Breaky Heart”—this joke is outdated by about a decade. Later in the film, Chelios explains the situation to his girlfriend, Eve (Amy Smart). In the middle of a crowded square in L.A.’s Chinatown, Chelios begins to undress her. She resists, screaming for him to stop. He begins to tear off her clothes, exposing her breasts. It looks as though he’s going to rape her for adrenaline’s sake. A crowd gathers, watching what looks like a man raping a woman, yet no one does anything (apparently this sort of thing happens all the time in L.A.). Eventually, Eve gets turned on and they have sex in front of a cheering, supporting crowd—all of whom are completely fine with this public sexual display. Which brings me to Eve, a character written so dumb, I am almost without words. When getting shot at by crooks, Chelios struggles to pull Eve away from her purse. Eve yells, “But my stuff!” She’s more concerned about her makeup and lotion than dying. Eve is the type of person that says “Why not!?” to random sex in front of schoolchildren.

Crank isn’t about reality, so I shouldn’t harp on the aforementioned sex scene (though it was pretty ridiculous) nor the unreal dumbness of Smart’s character. Regardless of the intentionally cartoonish tone the film creates, somehow I couldn’t dismiss Chelio’s ability to remain alive after several hours of being shot, burned, defibulated, overdosed, and infected by god-knows-what STDs from Smart’s character. This movie reminds me of 2004’s Cellular: the concept outweighs the actual film. Both hope the idea driving the picture is enough to forget about poor direction, silly writing, and unintentionally bad acting. Though Crank is filled with fast-paced action, the rest of the film is so preposterous, I couldn’t help but laugh my way through (in a mocking, contemptuous way).

Statham is known for playing characters who never seem to die (see The Transporter movies). He’s best used in supporting roles (see Snatch or Lock, Stock, and Two Smoking Barrels) and hasn’t yet carried an action film on his own, at least not a worthwhile action film. Over-the-top, exaggerated, and taking themselves way too seriously, his flicks are impossible for me to recall 2-minutes after putting the DVD back in the Netflix envelope.

I don’t know why, but it took two people to direct this film. Neveldine and Taylor should be making commercials for mountain bikes and energy drinks, not feature films. The directors use gimmicky shots, endlessly flashy editing, random subtitles, and meaningless freeze-frames to spice up their scenario. But all their efforts only divert attention to the bad script. These two learned everything they could from the Michael Bay School of Filmmaking, hit each other in the head with a hammer, and made Crank in a dreary haze while recovering from the blow.