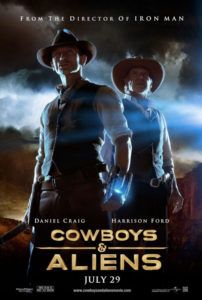 As the title suggests, Cowboys & Aliens embraces a whole cinematic history of tropes from “alien invasion” and Westerns films, stripping down both genres to their most basic form into a deceptively unique amalgamation. Jon Favreau left his director’s chair on the Iron Man franchise for this project, and he brings his usual technical craftsmanship to a picture whose genre awareness is shown through subtle, indirect references, while all the time allowing the film to be its own beast. Adapted by five credited screenwriters from the Scott Mitchell Rosenberg authored comic, the film serves up an interesting-if-serious-minded genre experiment that works, despite some lingering feelings of disappointment for its lack of raw, popcorn-munching silliness.

Alas, this summer blockbuster doesn’t feel as “fun” as it perhaps should have. It’s not a rip-roaring, fast-paced adventure that expects you to check your brain at the box-office. It doesn’t feel like a story conceived by two children who decided to forgo their routine game of “Cowboys & Indians” and incorporate aliens into the mix instead. Many audiences will expect that from Favreau, given his “fun” track record of titles like Elf and Zathura. And with the inclusion of stars Harrison Ford and Daniel Craig, seen by millions as Indiana Jones and James Bond, moviegoers may become frustrated when Favreau remains so true to Western conventions that he begins with an easy pace, takes his time building characters, and then ends his picture with a massive shootout finale. But then, Favreau has more class than to follow Michael Bay’s school of thought—that every frame of celluloid should contain action.

The story begins like many Westerns, with the introduction of the mysterious hero. Craig’s nameless stranger awakens in the Arizona desert with amnesia, his boots gone, and some kind of metallic contraption banded around his wrist. Just then, three travelers, a crusty father (genre legend Buck Taylor) and his two sons, surround him on horseback. When the travelers attempt to take the stranger into custody for a suspected bounty, Craig reacts by killing them with expert speed and skill. As the story progresses and he makes his way to a nearby town, called Absolution, he soon finds himself locked up in prison by Sheriff Taggart (Keith Carradine), his eventual transfer to federal custody halted when a powerful local rancher, the hard-edged Colonel Dolarhyde (Ford), calls for his head.

All at once, lights appear in the distance and out of the night sky comes an onslaught of UFOs that, after a barrage of laser blasts and explosions, swoop down and capture several townsfolk, grappling onto them with wires that yank them into the sky. The next morning, the stranger and Dolarhyde put aside their differences and lead a posse after the “demons” that took their loved ones. Of course, being set in the 1870s, alien fanaticism hasn’t yet overcome these people—they haven’t watched dozens of movies and television shows about alien invasion scenarios, and so they’ve never even conceived of an extra-terrestrial. Not until Olivia Wilde’s mysterious character Ella speaks with a Native American tribe leader do they understand what they’re up against. (This should come as no surprise to those familiar with Erich von Däniken or the History Channel’s countless specials on aliens helping to create ancient civilizations.)

Favreau fills the frame with gorgeous scenery courtesy of his New Mexico location shooting. And, with his great talent for casting, he also chooses an arsenal of character actors that do more with their few lines than a lesser actor could. Paul Dano is a standout, playing Dolarhyde’s over-privileged, arrogant son, but his scenes are unfortunately curtailed early on and would have given the film a playful dynamic had he remained onscreen for the duration. The same goes for Carradine’s understated Sheriff, who’s wisped off very early. Present for the long haul, however, is Sam Rockwell’s doctor-turned-bartender, a kindhearted sort desperate to learn Wild West ways to rescue his abducted wife. And against Craig’s rather one-note, grim-faced badass, Ford’s iron-fisted warrior transforms (albeit predictably) to reveal a soft underbelly, delivering the actor’s best performance in several years.

With Steven Spielberg as co-executive producer, you can expect the CGI to look impressive and the scope to evoke a certain grandiosity, and it does. The villainous insect-things abducting people aren’t very memorable in the bigger picture of cinematic aliens, and Favreau using occasional, blurry alien-POV shots doesn’t help establish the creatures themselves. But they serve their purpose as other-worldly monsters typical for alien invasion movies. After all, the predominant genre being invaded here is the Western, and those elements fall into place with perfect ease, the characters portrayed with gravitas that one doesn’t usually expect from a summer blockbuster, unless it’s directed by Christopher Nolan. And so, perhaps the film’s greatest failing is the title, which implies another kind of movie than the one delivered.

When co-writer Alex Kurtzman first described the script for Cowboys & Aliens, he said, “Imagine you’re watching Unforgiven, and the aliens from Alien land.” Take careful consideration of the films Kurtzman references. He didn’t describe the screenplay as lighthearted by saying it was Paint Your Wagon-meets-Independence Day. Instead, he chose two methodically paced, gravely serious films. And while the end result isn’t quite as humorless as Kurtzman’s description suggests (there are two or three chuckle-worthy moments), it’s not exactly pure escapism either. Tonally, it’s more in the realm of an Anthony Mann Western invaded by the creatures from Spielberg’s War of the Worlds. But the fact that Favreau has completed a film called Cowboys & Aliens which is about more than mere surface value is impressive. He decided to tell a real story instead of just feeding explosions and distracting special effects to his audience, and for that you must admire him, even if deep down you expected more by way of mindless entertainment.