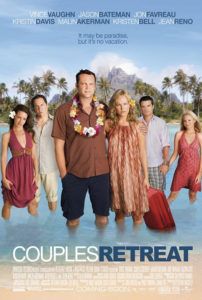 Couples Retreat puts four couples under the magnifying glass in a tropical resort setting, and by adhering to breezy romantic comedy formula, it maintains that every one of them will live happily ever after. However naïve, it showcases beautiful locales and pairs funny, average-looking comedians with thin, attractive actresses to sell itself. Plenty of wild antics ensue, including a run-in with sharks and some sexual horseplay. Everyone’s half-naked, so that helps keep the mood light. And to prove it’s hip and cool, it offers a Guitar Hero showdown to resolve one of its subplots. Every turn feels concocted and artificial. Mainstream audiences will love it.

Three of the four couples are convinced by the anal-retentive Jason (Jason Bateman) and Cynthia (Kristen Bell), who are considering a divorce because they’re unable to have children, that a couples resort will solve all of their marital difficulties. The three couples don’t have relationship problems, at least not ones that they’ll admit to, but they’re going anyway just get the half-price group rate. Dave (Vince Vaughn) and Ronnie (Malin Akerman) seem happy enough with two kids and busy lives. High school sweethearts Joey (Jon Favreau) and Lucy (Kristin Davis) haven’t been in love for years, and unbeknownst to both, they’re cheating on each other. The only non-married couple is Shane (Faizon Love) and the half-his-age Trudy (Kali Hawk), and he’s only dating her because he’s distraught over his recent divorce.

Before you know it, they’re on a tropical island, Eden West, which boasts couples therapy and skill-building exercises conceived by a French guru named Marcel (Jean Reno, who Hollywood gets whenever they need an actor to play a French stereotype). The island’s amenities seem like a definite bore compared to the sister island, the singles paradise Eden East, whose none-too-subtle tagline is “Come Together.” But according to the island’s snooty concierge, Sctanley (Peter Serafinowicz), no one from Eden West is allowed on Eden East. Instead, the four couples are forced to confront their complicated problems in uncomplicated ways. There are about two seconds of uh-oh when each couple comes close to breaking up. But as you might expect, everyone’s lovey-dovey when the credits begin to roll.

Something strange happens when too many otherwise talented celebrities get involved in making a single project. Either the result is a work of genius, or, in some cases, it becomes muddled and unfocused. Here it feels like everyone put in their two-cents until the end product became a mishmash of improvisations. The jokes came together only because they were edited that way, but they never congeal. You’ve got frequent collaborators Vaughn, Favreau, and their friend Peter Billingsley mix-n-matching writer, producer, and directing duties. You’ve got Bateman, Reno, Bell, Ackerman, and Davis to fill the boring roles, while Love and Hawk feel inserted only to break up the tedium of middle-class white people (but notice how the only African-American couple is absent from the poster). And you’ve got a plot wherein everything you expect to happen does.

Mindless in the worst way, Couples Retreat exists for those without a sense of imagination or realism toward love and relationships.  If you’re a member of the moviegoing public who can’t enjoy themselves without a happy ending, this is your film. There are four. By the time it’s over, there isn’t one iota of residual cynicism or doubt—not even the suggestion that these relationships need work. Statistically speaking, however, the story is unrealistic. Start pointing out the problems of any couple and one of them is bound to explode and then crumble. Not in this fantasy world. Hollywood wants you to know that a line of apologetic dialogue fixes everything in a broken relationship. Keep that in mind in case your marriage ever faces certain disaster.