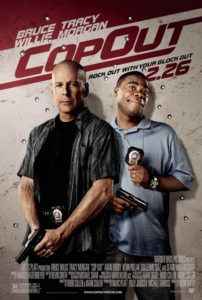 Cop Out forces its audience to consider Kevin Smith’s talents as a director and only a director, because until now, he’s always written whatever material he’s directing. But this spoof on typical buddy-cop comedies comes from writers Robb Cullen and Mark Cullen (with some obvious additions of raunchy dialogue from Smith), leaving the purveyor of fanboy favorites like Clerks and Mallrats directing someone else’s material. Smith has long been the recipient of harsh criticism for his lacking visual approach, whereas his writing contains all the style. This was supposed to be the movie that changed all that, the movie that convinced his detractors that he could actually helm a scene involving more than discourse. It was supposed to be, but it isn’t.

This is an action-comedy ripe with comedy but wholly lacking in action. The film is poorly edited, paced, shot, and lit—a technical disaster. The whole thing pays homage to those 1980s cop movies like 48 Hrs., Beverly Hills Cop, and Fletch, complete with a reminiscent electronic score to set the corny tone for our heroes. At one point a few years back, Smith was moving forward on a reboot version of Fletch starring Jason Lee in Chevy Chase’s original role, and with some luck the project fizzled away before any real production commenced. We can see something like what the result of that film would’ve been here, and it’s awfully underwhelming.

In their self-parodying roles, stars Bruce Willis and Tracy Morgan play thinly disguised versions of themselves as two chummy New York City detectives who’ve been partners for nine years. Though Willis has some hilarious lines, he feels like the straight-man against Morgan’s wacky brand of buffoonery. No one in the audience will believe that these two have been partners for nearly a decade, much less that Morgan is cop material at all. Willis is your standard troubled officer with problems on the homefront, no different than a dozen similar roles he’s played before. Likewise, Morgan is just Morgan, no different than his character Tracy Jordon on TV’s 30 Rock. Together they make a good comic team but a lousy pair of movie cops.

As the story begins, there’s the obligatory scene where our heroes receive a thrashing and suspension from their grumpy Captain for royally botching an investigation. Forced to turn in their badges and take a month-long leave without pay, Willis’ character must sell his prized baseball card to pay for his daughter’s gaudy wedding. It’s a matter of pride, really, since his daughter’s snooty stepdad (Jason Lee) has offered to pick up the $50,000 price tag. But if Willis lets the stepdad pay, it’ll bruise his parental ego. Anyway, two hoods rob the hobby shop where Willis is having his baseball card appraised, and the movie picks up when the detectives pursue an off-duty investigation to find the card. Meanwhile, Morgan is stricken by suspicions that his wife (Rashida Jones) is having an affair. Yawn.

Through it all, there’s some drivel about a Mexican drug lord (Guillermo Diaz) searching for a hidden flash drive that contains vital information, a sexy Latin kidnappee (Ana de la Reguera), and a rival cop duo (Kevin Pollack and Adam Brody). The best scenes feature Seann William Scott as the spacey thief who steals Willis’ baseball card and then sells it to a Mexican gang. Scott taunts Willis and Morgan when he’s captured, telling dirty knock-knock jokes and mimicking what they say. No one is acting out of their well-established boundaries here. The plot is riddled with clichés that are worn-out, even if they are spoofs. And none of it is particularly involving, especially the chase scenes and the shoot-em-up finale.

For Smith’s fans, who haven’t had a reason to celebrate his work for ten years, the result will without doubt prove apologetically enjoyable compared to his dreadful output since Dogma. There are some genuine laughs and funny performances, but Cop Out is so one-dimensional and inadequately made that it’s hard to recommend to anyone except the most devoted fan of the talent involved. The lackluster scenario and sleepy action scenes are instantly forgettable. And yet, Willis and Morgan have admittedly agreeable comic chemistry. Still, maybe Smith should do the writing and let someone else direct. The result might be less uneven.