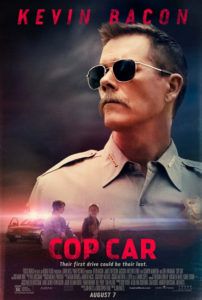 A stripped-down exercise in thriller mechanics, Cop Car revels in its various forms of simplicity: The recklessness of 10-year-old boys; fast cars; the intense acting of Kevin Bacon; the danger of firearms; sadistic dark humor; and the pleasure of doing something you know is wrong, while conveniently forgetting that you’ll soon get caught. The premise involves two young boys who run away from home and, on the proverbial road to freedom, discover a seemingly vacant police cruiser, which they decide to steal, much to the dismay of its sheriff-owner. Director Jon Watt’s first major feature was well-received at this year’s Sundance Film Festival, enough to draw the attention of Marvel and Sony execs and earn him at place at the helm of the next Spider-Man film. With good reason too. In many ways, Cop Car feels like a dark tale told in comic-book broadstrokes.

In the extended opening shot, Travis (James Freedson-Jackson) and Harrison (Hays Wellford) make their way across an empty prairie on sunny day. Travis says of every swear word he can think of, and the shy Harrison repeats them (well, most of them anyway). They’re the sort of boys who shove sticks down a snake hole just for the fun of it. And so, when they discover an empty cop car, they dare each other to touch it. Then they get in. Soon enough, the key is turned. “What if somebody sees us?” Harrison asks. “We’ll just tell ’em we’re cops,” Travis replies, not being ironic. 10-year-old logic drives every decision, from declaring the car theirs now to exploring the heavy weaponry in the back seat without caution.

While the children savor their joyride, Watts brings us back to the sheriff, Mitch Kretzer (Kevin Bacon), a mean peckerwood first seen dragging a dead body and disposing of it in an abandoned well. When he returns to his car, which has another body in the trunk, and finds it gone, he scrambles to cover his butt. He contacts dispatch and concocts a story about his radio being on the fritz, and then gets home to dispose of several kilos of (what appears to be) cocaine, just in case. Nevermind the details of whatever bad deeds Mitch has done. The screenplay by Watts and Christopher Ford supplies no backstories; not for Mitch and not for the boys. We never discover why they ran away, apart from vague allusions to the boys’ troubled home-life. Elsewhere, Camryn Manheim appears as a curious cat who sees the boys driving and reports it.

As the boys occupy themselves with police tape, a defibrillator, and trying to figure out how to shoot an automatic rifle, they soon discover a bloodied man (Shea Whigham) zip-tied in the car’s trunk. Once free, he tries to set a trap for his captor, but only after issuing a nasty, jaw-dropping threat to the boys. It’s easily the most memorable and unsettling scene in the film. Leading to a shootout climax that enters action movie territory but for a few brief moments, the film ends with a petered-out resolution, albeit a sense of safety for the boys. Regardless, those with young children will probably want to avoid the entire affair, as Watts and Ford subject their little characters to considerable amounts of peril—whether it’s looking down the barrel of a gun to determine why bullets aren’t coming out, or simply coming face-to-face with the vicious type played by Whigham.

Operating on lean terms, Cop Car proceeds at a fast-pace, proving cleanly assembled and shot. Cinematographers Matthew J. Lloyd and Larkin Seipl offer panoramic views of the Colorado Springs scenery, making excellent use of the widescreen frame even in car interior shots. Editors Megan Brooks and Andrew Hasse allow the crisp photography to breathe with a minimum of cuts. Phil Mossman offers a playful score, sometimes electronic and sometimes entering hillbilly country, but also curiously reminiscent of the Ravenous (1999) score by Michael Nyman and Damon Albarn. On the whole, Watts demonstrates his confidence as a filmmaker with a straightforward style, immediate characters, and an undeniably crafty manipulation of tension in subtle, funny, and at times frightening ways.