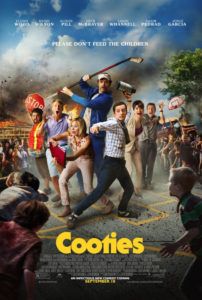 For many of us without children, and for others raising them, children can seem like horrible little disease infested monsters. There’s always something leaking out their noses. Their menu for the day is usually encrusted around their mouths. They care nothing about social decorum. Your time is unimportant to them. They’re clingy and don’t respect your personal space. Good luck trying to get one to control the volume of their voice. They’re dumb and don’t know how to do anything right. And they’re usually followed by an annoying mess of some kind. So imagine if their status as a figurative monster became a reality. Sounds pretty horrible, right? The horror-comedy Cooties explores that possibility.

Of course, plenty of movies from The Omen (1976) to Orphan (2009) have exploited creepy or possessed children, or in the latter case, children who turn out to be 40-year-old psychotics trapped in a preteen body. But before it gets to capitalizing on our fear of kiddies, Cooties exploits our fear of processed food. Over the title sequence, we see a chicken slaughtered, mushed-up, and squeezed out into the makings of lunchroom chicken nuggets. An elementary school girl bites into a green, putre-filled nugget and soon thereafter develops pustules and other signs of necrosis; then she gets all chompy for human flesh. Thus begins a zombie plague to which children alone are susceptible, while their healthy adult counterparts are left to get fingers bitten off and bodies torn apart by hordes of bloodthirsty, 4-foot-tall undead.

The thin story follows a zombie outbreak in Fort Chicken, Illinois, a small town built on chicken farming, as you might’ve guessed. At the local elementary school, Clint Hadson (Elijah Wood) arrives to substitute teach a class, marking his first appearance back in his hometown for 15 years. In the interim, he’s been off in New York City trying to get his first book written (it’s called “Keel Them All” and is about an evil boat). Now he lives with his mother. Returning to his old stomping ground, he’s reunited with a longtime crush and fellow teacher Lucy (Alison Pill), who’s very impressed by Clint’s would-be career. Unfortunately, she’s dating Wade (Rainn Wilson), a cocky gym teacher, which offers some romantic tension. Also on the faculty are cartoonish teachers like Rebekkah (Nasim Pedrad) who wants you to know that she carries a rape alarm; Jack McBrayer and all the awkwardness that Jack McBrayer entails; and Leigh Whannell (of Saw fame) as an oddball science teacher.

Cooties could never be called anything but derivative and uses no end of familiar tropes. The zombie plague of children breaks out fast, and they begin attacking teachers. For some reason or another (explained in a bit of biological psychobabble), the virus causing the outbreak doesn’t affect adults. The result requires educators, whose careers have been built on raising children, to defend themselves against the miniature flesh-eating horde. At first, the teachers barricade themselves behind closed doors, but eventually they arm themselves and fight back. Some may take issue with the perceived violence against children, but most of the violence is achieved through either CGI, cutaways, or using very short stunt-doubles in chaotic fight scenes. However, there’s no conflicted feelings when the resident zombie leader, a bully turned smarter-than-average zombie named Patriot (Cooper Roth), receives his comeuppance.

Directors Jonathan Milott and Cary Murnion team with screenwriters Ian Brennan and Whannell for a very broad horror-comedy, heavy on winks to the audience. But admittedly, it made me laugh, despite the entire project being an exploitation of our society’s current obsession with tales of the zombie apocalypse. Extreme gore and a silly sense of humor combine into an often funny but ultimately forgettable experience. The treatment makes similar fare like The Faculty (1998, where the teachers become aliens, and which also starred Wood), seem quite serious by comparison. Complete with in-jokes about Wood playing Frodo in The Lord of the Rings trilogy and Wilson being his absurd self throughout, the movie is never anything more than broad, bordering on a spoof. The tone is reminiscent of Zombieland (2009), except not as clever, funny, or scary. Although picked up at the Sundance Film Festival by Lionsgate, Cooties doesn’t feel worthy for theatrical viewing; its direct-to-video quality makes for a fine late-night screening at home, where it can be shrugged-off as soon as it’s over.