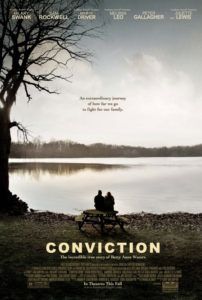 Predictable as movies get, Conviction comes from the based-on-a-true-story mound of Hollywood claptrap. Director Tony Goldwyn delivers a movie that is well made; his cast of notable actors gives capable performances. The presentation is competent if straightforward. There’s nothing offensively wrong with the production, except that it’s so predictable. Some will see this movie and find it mildly compelling, others will dismiss its heavy-handed pandering. But there’s something about its ordinariness that deserves your anger, if only for wasting your money on a ticket for something that deserves a cable television debut on Lifetime. Indeed, this entire scenario feels like a movie-of-the-week, boasting an “inspiring” story that’s been abridged for mass consumption.

Beginning with a series of flashbacks (and flashbacks within flashbacks), the story opens by establishing the unshakable family bond between backwater Massachusetts siblings Betty Anne (Hilary Swank) and Kenny Waters (Sam Rockwell). Later, both have grown and have children; Betty Anne is a responsible homemaker and her brother remains a wildcard. Suddenly, when gathering the usual suspects for a local murder, grumpy police officer Nancy Taylor (Melissa Leo) picks up Kenny. He’s released but picked up again two years later and ultimately found guilty of first-degree murder. As she has no money for the sort of high-powered attorney that could free Kenny, Betty Anne resolves to become an attorney herself. Demonstrating incredible personal drive, she begins with her GED, gets a bachelor’s degree, and then heads to law school, sacrificing her marriage and relationships to educate herself and become a lawyer for her brother’s sake—all this with the possibility that Kenny could have killed the victim after all.

Consider the title, which offers an obvious double meaning in a blatant attempt at cleverness. In case you didn’t catch it (how could you not?), the title suggests both the ruling on Rockwell character’s murder case and the determination of his sister to find a legal solution to free him. Isn’t that brainy, in a hit-you-over-the-head-with-a-hammer sort of way? Perhaps it’s cynical of me to find little about the story rousing in the way the filmmakers had hoped, but it’s become an all too common occurrence for wrongful imprisonment cases to have happy endings thanks to breakthroughs in DNA forensics, and the frequency of these cases now registers only an emotional numbness thanks to their familiarity. Had the filmmakers wanted to shock us, they could have stuck to the facts. The truth is, six months after his inevitable release, the real Kenny Waters died in a tragic fall that left his skull fractured. Had the filmmakers included this fact, it might’ve challenged the audiences to ponder the meaning, not to mention heartbreak, behind Betty Anne’s quest to free her brother. But instead of leaving viewers with the real-life despair of the whole story, screenwriter Pamela Gray delivers a false, sugar-coated version.

Swank involves herself on a producer level in yet another project seemingly constructed for the sole purpose of earning her yet another Oscar, which would be her third after wins for Boys Don’t Cry and Million Dollar Baby. Fox Searchlight backs her all the way, hoping to earn some prestige, though doubtless audiences will see right through this one, just as they did Amelia, another Swank-Searchlight co-production. Swank drops every “R” in her Massachusetts pronunciation, leaving her natural Southern twang hardly noticeable; though, this is scarcely enough to justify a third win, or even nomination. She’s acting on autopilot here, not taking any risks as an actor or producer by involving herself with this material, having displayed greater range in her performance in dribble like P.S. I Love You.

Rockwell gives a performance that may be the only redeeming element of the movie. He’s not delivering a complex characterization, and we’re not seeing anything he hasn’t done before in Confessions of a Dangerous Mind or Snow Angels, but it’s a strong performance with believable outbursts when the script calls for them. Minnie Driver shows up from wherever she’s been for a supporting role as Betty Anne’s friend and fellow student. Juliette Lewis has a cameo playing her umpteenth white trash basket case. And Peter Gallagher brings his eyebrows to play Barry Scheck, the attorney who helps Betty Anne stick it to D.A. Martha Coakley for ignoring DNA evidence.

Conviction hopes it will move you and inspire you with its dramatic swells, only to offer a happy and safe world in the ending. It’s easy to tell what the movie’s going for because the uplifting score by Paul Cantelon cues your emotions at just the right moments, and Goldwyn lingers on teary-eyed close-ups, letting you know how you should feel by using his characters’ soggy faces as emotional billboards. This is a sappy, by-the-numbers drama that has no flavor and even less emotional involvement. And where the actual true story would have left the audience considering what it all means by offering that regrettable last-minute fact of Kenny’s death, here the story plays out just as one might expect, without ever asking the audience to think.