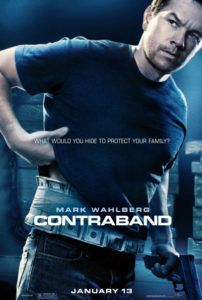 Contraband is a remake of the Icelandic film Reykjavik-Rotterdam, and it’s directed by that film’s star and producer, Baltasar Kormakur. Perhaps, being familiar with the material, Kormakur felt he could improve upon director Óskar Jónasson’s original, even in another language that’s not his first. Perhaps having gone through the experience of making this film once made Kormakur realize how differently things should have been done the second time around. And perhaps, in a few years, this remake’s own producer and star Mark Wahlberg will become aware of the lackluster movie that is Contraband, and he’ll attempt to remake it for his first project as a director. Then again, changing who’s in the director’s chair doesn’t necessarily mean the production’s lousy scripting by Aaron Guzikowski or the predictable plotting would be corrected. Some stories are just hopeless in that respect.

Every so often a conventional Hollywood actioner like this gives way to great performances or stylish direction, but not here. The actors inhabit one-note characters, all of them either good-guy smugglers or bad-guy smugglers based in New Orleans. We can tell which ones are good because they’re pals with Wahlberg, who plays Chris Farraday, a former smuggler who went straight for the sake of his wife (Kate Beckinsale) and two children. Much like Wahlberg (who should have moved on from drivel like this after The Departed and The Fighter), everyone around him is incredibly bland and obvious. Even the ones who seem to be good but turn out to be bad are obvious. The bad guys, as usual, are more interesting. We know who the villains are because they look like villains, talk like villains, and their performances are fascinating. Take Giovanni Ribisi, who plays seedy smuggler Tim Briggs under a large goatee and buzzing voice; if James Bond was ever slumming it, Briggs would meet the resident low-class Bond villain requirements.

The movie involves the smuggler underworld and goes into vague detail about that world like an under-researched police procedural might. The story kicks off with Chris’ screw-up brother-in-law Andy (Caleb Landry Jones), who, while running cocaine for Briggs, dumps the shipment to avoid being captured when his cargo vessel is boarded by customs. Briggs wants his money, but Andy doesn’t have it, so Briggs holds the Farraday family responsible for paying him back. Chris must come out of retirement to fulfill that typical heist movie “one last job” cliché and appease Briggs, or else his family may be in jeopardy. Chris’ plan is conceived in a flash and involves importing a shipment of counterfeit “funny money” from Panama City to New Orleans on a ship helmed by crotchety ball-breaker Captain Camp (J.K. Simmons). Meanwhile, Chris’ best friend, Sebastian (Ben Foster, who always plays the shadiest character in the movie), a recovering alcoholic with money problems, is left to safeguard Chris’ family from Briggs.

And so, the central part of the movie concerns Chris’ ride to and from Panama, as he organizes his crew, sniffs out hiding spots for his goods, and orchestrates a master plan to outwit the easily outwitted Briggs. Everything that can go wrong does. When Chris arrives in Panama for the pickup, the millions in counterfeit monies are poorly made, forcing him to go to a competitor, the lunatic Gonzalo (Diego Luna), who demands that Chris participate in a haphazard armored car robbery as payment. Later, there are secret shipments of cocaine and a stolen Jackson Pollack painting to consider. Given how much goes wrong with Chris’ master plan throughout the course of the movie, and the prevalence of “one last job” heist movies that end badly for all involved, it’s any wonder the filmmakers dared to present this film’s absurd all-wrapped-up-in-a-tidy-bow happy ending.

Contraband’s many shootouts and switcheroos are very plainly presented in the same low-key way that Wahlberg fulfills his performance: They’re watchable, just not very interesting. Things have a way of happening in Contraband so that we’re aware how they should be exciting, but they aren’t. Even when the stakes are at their highest, the viewer feels unconcerned and uninvolved. The proceedings all probably looked great on paper, yet, with the exception of Ribisi who gives his all, Kormakur fails to inject this familiar fodder with any panache. Add to the dullness a slew of tough guy male characters whose one emotion is macho and a single woman character that becomes the object of violence, and this flavorless actionstuff goes from tiresome to mildly unpleasant. And in the end, when the sun is shinning and the good guys got away with it, you wish they hadn’t, because doubtless it would have made a more interesting movie.