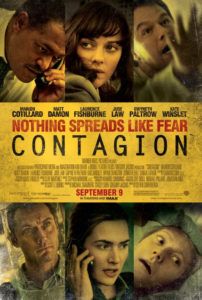 When watching Steven Soderbergh’s Contagion, you suddenly become aware of your surroundings. Someone a few rows back sneezes into her hands. An elderly person down the row hacks a fluid-rich cough and doesn’t cover his mouth as well as he should. Someone else sniffles and wipes their nose on their sleeve. All at once, the whole theater crawls with disease and you just need to get out. That’s how one begins to feel after only a few moments into this masterful film. And it only gets worse when it’s finished and you leave the theater. You become alert to the notion that Mr. Cough-Cough and Ms. Sneezy have touched the handrails and pushed the theater’s doors open, effectively spreading whatever they have. And don’t even think about going into the public bathroom. You want nothing except to go home, douse yourself in hand sanitizer, and slowly spell out “q-u-a-r-a-n-t-i-n-e” until your dread passes.

Soderbergh reteams with The Informant! screenwriter Scott Z. Burns to create a sprawling international account of a viral outbreak delivered through impressive, efficient storytelling, not unlike Soderbergh’s own Traffic did for drugs. Burns’ script tracks the aggressive virus from its first exposure to its growth into a worldwide pandemic, carefully choosing characters that represent key elements in such a scenario, and then places some of Hollywood’s top performers in those roles. The outcome is not unlike those massive, star-studded Irwin Allen productions from the 1970s, like The Towering Inferno and The Swarm, films that tell a perambulating story that is more substantial than any one performance. In another way, thanks largely to Cliff Martinez’ electronic score that is reminiscent of the opening music in Romero’s Dawn of the Dead, this is an inconspicuous horror movie designed, with much success, to leave us with a lasting sense of paranoia. 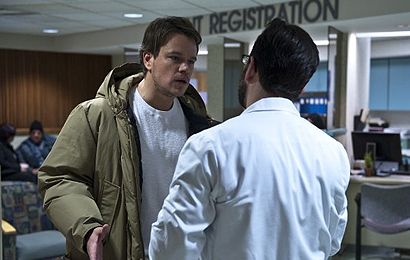 With almost documentary precision, a practical outline details current procedures in place to identify, contain, and eliminate a deadly virus. A growth of small, alarming episodes unfold and build deliberate tension: Gwyneth Paltrow returns home to Minneapolis from Hong Kong, seemingly jet-lagged; her condition worsens and she dies from a mysterious disease. Her young boy soon follows. More cases break out around the world. Public alarm sets in. Matt Damon plays the immune husband, a father concerned for their remaining teenage girl, and unable to bury his wife and youngest child because the mortuary refuses to take infected bodies. Laurence Fishburne plays a honcho from the Centers for Disease Control and Prevention, and Bryan Cranston is his military counterpart. Both officials send Kate Winslet’s Epidemic Intelligence Service officer to Minneapolis to control the outbreak there, and she confirms the disease’s incredible ability to spread, incubate, and kill at a rate faster than most diseases. As the number of infected reaches millions, Jennifer Ehle’s lab doctor takes risky measures to ensure a vaccine is discovered in time.

Engineering a vaccine, securing government approval, and then manufacturing mass quantities is a slow process that takes months. Jude Law’s self-serving blogger and conspiracy theorist believes the government intentionally delays production because they hope to make a profit with pharmaceutical companies. His dangerous writings ignite suspicion and direct panicky people toward a possible, though unverified miracle cure. Is he a prophet or a profiteer? Looting and violence follow widespread terror, as state borders shut down and the government warns against social contact. Meanwhile, Marion Cotillard plays a representative from the World Health Organization tracking the disease’s origins in Hong Kong, but she finds herself held for ransom by her contacts to ensure one of the limited vaccine shipments makes its way to a small village.

Soderbergh’s subtle, straightforward style has brought into question his directorial signature, but he outclasses many others through his organization and narrative economy. The clarity he brings to these overlapping stories is nothing short of astonishing. Over his twenty-plus year career since his 1989 independent debut with sex, lies, and videotape, Soderbergh has gone from indie artist to a filmmaker that brings a discerning craft and restraint to his mainstream work (Out of Sight, the Ocean’s trilogy, Erin Brockovich), while never losing touch with his indie origins through a number of dynamic projects (Che, The Good German, Solaris). This is arguably one of his best films, finding a unique balance between commercial cinema and his oft-employed detached arthouse sensibility. As the PG-13 rating indicates, he resists venturing into gory details, so audiences concerned that victims will be vomiting up their insides need not worry. The sole moment of bloody detail involves an autopsy and comes with a mild shock. 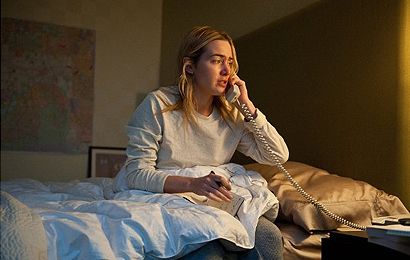 Even with these impressive stars—whose roles are more richly developed than you might think possible, given their multitude and a runtime of under two hours—the main character is the disease whose progress drives the story from location to location. Soderbergh, also acting as cinematographer, consulted CDC scientists to determine exactly how such a virus would spread in today’s interconnected, overpopulated world, and how they would respond to such a threat. The dialogue is filled with accurate facts about the rates at which we touch our faces or come into contact with other people. And then we’re to consider the R0 (pronounced “R-naught”), the basic reproductive rate used to determine how quickly an infectious disease will spread through a population. The resulting realism shown is unlike anything we’ve seen before. A comparable, but decidedly more mainstream effort like Outbreak from 1995 takes an aggrandized thriller approach to the same basic idea, whereas the veracity and unembellished production design here force us to consider the real-life possibilities.

There’s a scene later in the film where Elliot Gould’s research scientist sits in a diner after discovering for himself the potency of this new virus. He watches as employees make a lax effort to sanitize a glass, as the glass goes from one customer to the next, and we imagine the virus spreading in a dozen ways through the simplest of exchanges in human contact. The fear Gould’s character feels resonates with Contagion’s audience and gets under our skin, so to speak, bringing the ruthlessness of any disease into our consciousness. Soderbergh’s film is therefore both a revealing and eerily haunting examination of the subject, but also another of the director’s wonderful, engrossing ensemble pieces. In our world so unnerved by the latest pathogen on the scene and preoccupied with getting this year’s “essential” flu shot, here’s a film that exploits all of our inherent concerns with factual detail, expertly augmenting those fears into an experience that stays with you long after viewing.