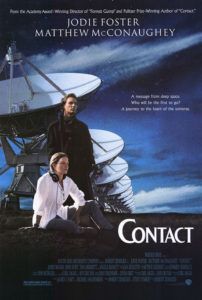 With Contact, Robert Zemeckis demonstrates how special effects and a blockbuster-sized budget can serve a strong story instead of overwhelm it, and he does this through a thoughtful assessment of the balance (or lack thereof) between science and religion. This unconventional studio film, based on the best-selling novel by Carl Sagan, weighs notions of faith-based thinking in a science-fiction tale following humanity’s first contact with an extra-terrestrial intelligence. In asking if life exists elsewhere in the universe, Sagan and Zemeckis offer multiple points-of-view—from intellectual to philosophical to political to extremist—and attempt to find similarities between sometimes diametrically opposed perspectives. The ruminative approach and final resolution that there are no certainties in the universe, however honest, left audiences unsatisfied. But the film remains a daring work, among the most cerebral and emotional motion pictures on this subject ever released with a major price tag by a major studio.

Released in 1997 to intermittent praise, audiences and critics seem to have felt betrayed by the lacking presence of aliens in the finale, and altogether missed the grander message of the film. After two-and-a-half hours of discussions about the potential existence of extra-terrestrials and hints leading characters closer to the film’s alien presence, viewers felt robbed when in the finale Hollywood didn’t include some computer or makeup artist’s rendering of alien lifeforms. Among the numerous comments about the conclusion, Toronto’s Globe and Mail critic wrote the film “ends up with piffle” while the Washington Post commented it “falls into a lull and finally succumbs to entropy”; even Time’s Richard Schickel remarked it was “something like one of those mysterious asteroids that get the astronomers all worked up: a large body of gaseous matter surrounding a relatively small core”. These complaints about the film failing to live up to its supposed promises only confirm that viewers failed to absorb the dramatic weight of the story, see beyond typical genre expectations, and consider the ideological questions put forth therein.

Is this the blunder of the writer and filmmaker, who perhaps didn’t make their objectives more apparent earlier in the film? Or have audiences simply grown too accustomed to seeing aliens in the space-aged science-fiction genre? To be sure, Hollywood has fed moviegoers a steady diet of cinematic creatures from outer space, some dangerous monsters and others gentle Spielbergian beings. Yet, how many motion pictures about extra-terrestrials refuse to show even a glimpse of said aliens? From this perspective, it comes as no surprise that the film most closely related to Contact in its ponderous consideration of life elsewhere in the universe is Stanley Kubrick’s 2001: A Space Odyssey, another picture set into motion by the presence of alien life but without even a momentary sighting of extra-terrestrials, and one Zemeckis encouraged his cast and crew to watch before and during production. But then, not knowing is exactly the point of a film like Contact, leaving the truth a perception—the Fox Mulder “I want to believe” mentality toward either alien life or an omnipotent god who created the universe, or even the Philip K. Dick outlook that they’re one in the same.

Working from Sagan’s exhaustively researched novel, the film, which only diverts from the source here and there, contains a technical accuracy only matched by its imagination. Astronomers, astrophysicists, and cosmologists will note the theoretically conceivable ideas present within Sagan’s book are carried over into the script, credited to James V. Hard and Michael Goldenberg. Everything from NASA policies to spatial wormholes have been given an unprecedented scientific and historical exactness, no doubt as a result of Sagan’s creative input and personal investment on the project until his death in December of 1996 (the film is dedicated to the author). Sagan had been developing the film since 1979, and over the years it languished in developmental limbo at various studios until, in 1985, Sagan published the bestselling novel based on his original idea. The project finally landed at Warner Bros., where it passed through the hands of various screenwriters and directors (including Roland Joffé and George Miller) before Zemeckis finally signed to direct.

The film opens with a beautiful sequence dwarfing the size of our planet (in all its self-importance) in comparison to the vastness of the universe. The frame begins on Earth and pulls back through our solar system, passing Jupiter and Saturn, increasing velocity through our galaxy, through hundreds of galaxies into deep space and beyond. When the sequence ends, we’re back to Earth during the 1970s, where we meet 9-year-old Ellie Arroway (Jena Malone) and her father (David Morse), and learn of Ellie’s two passions: amateur astronomy and listening to faraway signals on a short wave radio. When she’s orphaned by her father’s sudden death, she devotes her life to searching for meaning to the universe. By the time she’s grown (and played by Jodie Foster), Ellie has applied her considerable education to the SETI (Search for Extraterrestrial Intelligence) Institute, at a massive radio telescope in Puerto Rico. There she listens for signs of intelligent life elsewhere in the universe. She also meets and has a brief but significant affair with a religious scholar, Palmer Joss (Matthew McConaughey).

Before long, the President’s national science advisor, David Drumlin (Tom Skerritt), shuts down the SETI project, forcing Ellie to look for funding elsewhere. She finds her guardian angel of sorts in eccentric billionaire S.R. Hadden (John Hurt), who funds her time renting the VLA (Very Large Array) in New Mexico, where after years of devoted listening, she finally discovers a signal of extra-terrestrial origin. Of course, once her finding is confirmed, her project is threatened by a media frenzy and government influence—headed by James Woods’ National Security Advisor—attempting to take over the project for the sake of national security. As the findings continue, Ellie’s team reveals a hidden message in the signal: the first television broadcasts ever sent into space, by noneother than Adolf Hitler. Though unsettled by the historical irony of this image, embedded into the message are plans for a massive machine whose intent is unknown, but represents a superior intelligence attempting to make contact.

A massive worldwide effort of funds and resources are amassed to build the alien machine, while Ellie engages in televised and political debates on the importance of her find. Religious extremists (headed by wacko Jake Busey) believe contacting aliens undermines God, whereas Joss, now an important figure in modern religion, believes science and religion can coexist. In time, and after radicals destroy the machine’s first attempted launch, Ellie is chosen to enter the machine as its pilot and determine its purpose. She is launched deep into space in an eye-popping journey through a wormhole-like tunnel of light, and soon she awakens on an alien beach with a construct of her father there to greet her. The beings who sent the message explain they intend to reveal themselves in time, after humans have acclimated to the idea that they are not alone; but for now, they’ve used her father’s image as a comforting welcome. And when they send her back, everyone who witnessed the launch insists she never left, that the launch failed and she went nowhere. Offering the only confirmation of Ellie’s experience, the government finds her personal recorder picked up 18 hours of static, but keep this information from her to maintain “national security”.

Without implicit proof of her journey, Ellie relies on her faith that what she experienced was real. She is not unlike an ancient prophet who claims to have seen God in the clouds; no one else sees this, leaving only blind faith to guide the prophet’s followers. Sagan would argue this is the basis not only for religion but for belief in extra-terrestrials, and his story becomes an allegory for how these opposing forces, religion (represented by Joss) and science (represented by Ellie), have much in common. Joss needs the idea of a god as much as Ellie needs to find proof, both for deeply personal reasons, and yet their findings remain elusive and keep them searching. To actually come across undeniable proof of one or the other would destroy our fragile belief-based perception of the world and sense of security. Not knowing keeps humanity searching, and civilization intact.

Zemeckis could have gone against Sagan’s wishes, rewritten the conclusion with CGI aliens in the finale, and in turn pandered to less contemplative viewers. When Zemeckis was approached to direct in 1993, the script contained a final scene in which aliens reveal themselves to humanity by appearing in Earth’s atmosphere, where they put on a light show akin to Close Encounters of the Third Kind. For all the right reasons, Zemeckis declined to direct at the time, largely because of that scene. Only when Zemeckis was approached again after winning an Oscar for directing Forrest Gump did Warner Bros. offer him complete artistic control, with which he changed the ending to a more ambiguous one. Zemeckis, unlike his directorial predecessors on the project, understood that showing aliens not only defeats Contact’s thematic design by laying to waste any arguments about faith, but purges the audience of those elusive yet universal components that allow us to identify with both Ellie and Joss: imagination, hope, and belief.

Of course, there’s an element of pure sci-fi escapism here, appealing to anyone who’s ever looked up at the stars and wondered what’s out there. Zemeckis, no stranger to special effects, incorporates wondrous, transportive spatial sights with CGI to render Ellie’s flight into the unknown (at the time, Contact contained more special effects shots than any other film), as well as much of the earth-bound scenes. Consider the appearance of former President Clinton, whose actual speech on Mars was doctored, not unlike those famous scenes with Nixon and Kennedy in Forrest Gump, to look as if he was addressing the film’s “first contact” theme. The effect is flawless. Other legitimate figures (including Larry King) in the news media, largely from the Warner-owned CNN, make appearances in the film during the televised debates with Ellie and Joss about the significance of “first contact”. Although, both The White House and CNN later criticized the film’s uses of the President’s image and the network talent, claiming it was unauthorized by The Powers That Be. Nevertheless, their inclusions speak to the film’s authenticity and the feeling throughout that this is a science-fiction story that takes place in the real world.

Both Contact and 2001: A Space Odyssey involve an extra-terrestrial force leaving breadcrumbs for humanity to pick up and follow, setting a single individual on a profound journey of discovery, albeit an indefinable discovery. In terms of narrative, Kubrick’s film is more transcendent and ethereal than Zemeckis’ straightforward approach geared toward mainstream viewers. And so, how strange that the majority of commercial audiences failed to identify with either Ellie or Joss, and ultimately left Contact trapped amid a wave of mixed appraisals and disappointment. Upon reassessment, and the knowledge that this isn’t a film about finding aliens but rather finding one’s own sense of faith, cinephiles will find an intelligent, superbly told story filled with more ideas infused into its emotional core than Hollywood typically musters. Arguably Zemeckis’ best and easily his most underappreciated film, Contact deserves insightful viewership to uncover its impact, but its rewards are many and always moving.