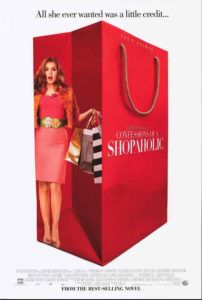 Since the fashion savvy heroine of Confessions of a Shopaholic receives worldwide journalistic acclaim by reducing economic theory into metaphors about clothes shopping, I’ll do the same in my review of the movie: This romantic comedy is a dependable pair of socks whose brand name we know and trust. Having purchased these socks before, we’re aware that holes occasionally form here and there, but since they’re cheap and comfortable, we buy them anyway, wear them out, and then buy them again. Even if they’re the same exact pair we bought last time, which we know will develop holes and ultimately disappoint, we’ll repurchase them again and again because they’re comfy and we relish their familiarity.

Okay, so maybe I wasn’t born to write about fiscal growth by way of posh designer wear (only because my metaphors would revolve mostly around pajama pants, jeans, and superhero-themed t-shirts). Not the case with Rebecca Bloomwood (Isla Fisher, from Defintely, Maybe), who can spin out an article about any range of subjects from shopping to haute couture. It’s her passion. When out of the blue she’s laid off, Rebecca realizes she has mounds of credit card debt and decides to apply for a writer position at a top fashion mag. She doesn’t get the job but instead ends up writing for the financial branch of the same root company, hoping to work her way up.

Her boss is the charming and good-natured Luke (Hugh Dancy, from The Jane Austen Book Club), who blindly believes in her abilities. His belief is confirmed by her overnight success, which propels her into the spotlight of the budgetary advice column world. While there, Rebecca is spotted by the crooked bill collector (Robert Stanton) that hounds her throughout the movie about her massive credit card debt, and who breaks every collection law in the book to get at her. If only she had done her research like a good journalist, she’d know that a collector cannot confront a debtor while posing as a member of a morning talk show audience.

Rebecca has an addiction to shopping. Simple as that. When she sees a sale on Gucci and realizes she can’t have a new something-or-other without an equally superficial something-or-other to go with it, suddenly her credit cards take the brunt of the punishment. But like any tale about substance abuse, Rebecca’s behavior catches up with her in a number of embarrassing confrontations, some personal, some before a live studio audience. For starters, she sees (very creepy) talking mannequins in shop windows waving to her to come in. They talk to her and she talks back. Doesn’t that mean Rebecca is mildly schizophrenic?

Based on the Shopaholic series of novels by Sophie Kinsella, this light rom-com comes from director P.J. Hogan, a big name in the genre with Muriel’s Wedding and My Best Friend’s Wedding on his résumé. This movie is just as useless and out of touch with reality as those, but it’s sort of fun, sort of cute, and sort of appealing, in that I-went-in-expecting-something-dreadful-and-found-myself-mildly-entertained way.

Without fail, everything that needs to happen in Confessions of a Shopaholic does. The heroine falls in love with the charming fella. The bitchy competition receives her comeuppance. No one we care about sells out though their temptation is high. Furthermore, it has everything a moviegoer needs to fulfill their girlie rom-com quota: talk of high fashion, frivolous laughs, a wedding, wardrobe malfunctions, and, prolonged until the last possible moment, a coupling the audience knew would happen eventually and was overjoyed to see that it finally does.

Certainly the movie is ill-timed in its release. In our currently global recession, it’s unlikely audiences want to watch the exploits of an addicted shopper, since few of us have the luxury of even the notion of frolicsome spending (feel free to speak to mannequins, though). Some might argue that perhaps we can live vicariously through Rebecca. But once the movie ends, there’s nothing to do but reflect on how we wish we had that money to spend, or at least had the irresponsible tendency to stretch our credit card limits to their limit. Maybe the movie is a cautionary tale intending to show how we don’t need to spend to be happy. Maybe, but I doubt it, since several scenes describe the ecstasy of shopping and the allure of name brands, while Rebecca’s thrifty parents (Joan Cusack and John Goodman), however wise, are depicted as white trash oddballs.

Another metaphor: Confessions of a Shopaholic is like the immature little sister of Legally Blonde and Sex and the City. She tries to follow in her big sisters’ footsteps, but should have found her own path, since one sister is an airhead and the other a whore. Fisher and Dancy make a fine pairing, and the movie is littered with cameos (the best of which is by Kristin Scott Thomas as a French fashion guru). But the result follows a tired blueprint that hasn’t fared well in the increasingly inept market for romantic comedies. I’ll never understand why Hollywood seems so determined to depict falling in love as such an idiotic farce.