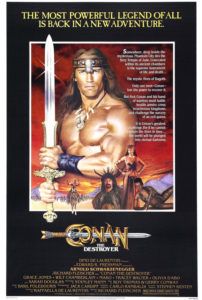 If you’re among the few who considers Conan the Barbarian the Batman Begins of 1980s “Sword and Sorcery” films, then its immediate sequel, Conan the Destroyer, aligns more with Batman Forever—which is to say, not as unwatchable as Batman & Robin, but still quite cartoonish. Produced after Schwarzenegger’s breakthrough role in the original and released in 1984, the same year as James Cameron’s superstar-making release The Terminator, the sequel takes a comic book approach to Robert E. Howard’s cannon. While the original boasted a hard-R-rating, complete with limb-chopping battles and nudity abound, this follow-up seeks a youth audience with its PG rating. An adventurous and comic relief-fuelled tone sends the hero on a there-and-back-again journey with a band of followers, meeting evil wizards, grotesque monsters, and sexual temptation along the way. Alas, after the original, the result feels like child’s play.

Disappointed by the profitable but not blockbuster performance of Conan the Barbarian, producers Dino and Raffaella De Laurentiis decided expanding their audience was crucial to more profits. When John Milius was unable to return to the director’s chair (busy with Red Dawn), Laurentiis hired Richard Fleischer to take over. Fleischer’s experience with epic adventures included similar material like The Vikings (1958) and iconic fantasy like 20,000 Leagues Under the Sea (1954). After filming, he retooled the final cut, which originally received an R-rating, and eliminated gory violence and a sex scene to preserve the PG-rating. As a result, the sequel would contain less violence and nudity, but more humor in the adventurous spirit—in other words, it would be common.

Despite Conan the Barbarian’s conclusion, which suggests the warrior’s time as a ponderous king would be address in future sequels, the story opens with Conan and his thief-sidekick Malak (Tracey Walter, best known as the henchman “Bob” from Tim Burton’s Batman) counting their loot after a successful heist. All at once, they’re attacked by soldiers of Queen Taramis (Sarah Douglas), including her top soldier Bombaata (Wilt “The Stilt” Chamberlain), to test Conan’s battle prowess before offering him a job. Taramis wants Conan to lead the virginal Princess Jehnna (Olivia d’Abo) on a quest to find a key, and Conan agrees only after Taramis promises to return his love, Valeria, back from the grave. Along the way, Conan rounds up more sidekicks in the form of good wizard Akiro (Mako, reprising his role) and feral female warrior Zuka (singer, model, and weirdo Grace Jones). But the duplicitous Bombaata has specific orders to keep Princess Jehnna a virgin, which means no funny business between Conan and the flirty princess. Bambaata also has orders to kill Conan when they’re mission is finished (hint: he isn’t successful). It all ends with a Star Wars-like medal ceremony that would be all but identical with the addition of a few droids.

In terms of mindless entertainment value, Conan the Destroyer is easier to watch than its predecessor, its plot adhering to typical adventure story structure. Several battles great and small carry the characters from one place to another, many gratuitous, the great ones featuring some neat animation and makeup effects. One sequence, involving a wizard of illusions who kidnaps Princess Jehnna with a dragon of smoke, takes place in a circular room of mirrors; Conan fights the wizard to no avail, until he realizes that smashing a mirror strikes a blow to the wizard—needless to say, Conan earns himself about 1,000 years bad luck. Another sequence involves tearing the jeweled horn from the head of a monstrous pagan god-turned-flesh (played by Andre the Giant. These moments, though pushing the boundaries of the film’s rating with their violence, are presented with mild suspense relieved by screenwriter Stanley Mann’s incessant comic relief. With few exceptions, Malak, Akiro, and Zula seem present for the sole purpose to comment on Conan’s battles (not to mention represent at least two broad racial stereotypes).

Legendary cinematographer Jack Cardiff, who brought his Technicolor expertise to Powell and Pressburger’s The Red Shoes and won himself an Academy Award for Black Narcissus, reteamed with Fleischer to shoot the film. His gorgeous presentation employs soft lighting and clear movements within impressive Hollywood sets, lending a legendary atmosphere to the crisp production values. That said, the presentation far exceeds the content. Even the best visuals cannot make up for Schwarzenegger, whose role requires more dialogue here than the original, including a wildly funny drunk scene bound to incite laughs (at, not with). All around, the roles are characteristically one-note, and these actors, though they look their parts, deliver performances that would be impressive were they actual barbarians. But they are not.

Conan the Destroyer makes fine entertainment for preteen boys. It’s violent, simple-minded, and contains mild inklings of sex that shouldn’t offend the majority of audiences. Moreover, there are monsters and wizards and clanging metal weapons ringing to the tune of Basil Poledouris’ unforgettable score—music that stays with you long after you’ve forgotten the dull story. But eventually boys grow up and they’d rather be watching Conan the Barbarian, which presents more “mature” storytelling and filmmaking. Fleischer and Cardiff make the picture better than it has any right to be, supplying its most watchable, superficial traits. But unless you’re revisiting the material out of sheer nostalgia or perhaps as a “guilty pleasure” viewing, there’s not much here beyond surface value to keep our attention.