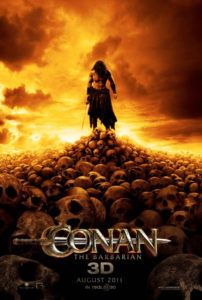 For a film adaptation of Robert E. Howard’s Conan tales to transcend the limitation of its barbarian characters and pre-civilized setting, it requires ambitious scope, a sense of the operatic that will transport audiences into the basic, brutal, and dramatic existence of Howard’s mythology. This is why the 1982 adaptation by John Milius was so great, because the film treated its Conan narrative as legend-in-the-making. The same cannot be said for the new version of Conan the Barbarian, directed by Marcus Nispel, helmer of Pathfinder. This reimagining, distributed by Lionsgate, plays to the lowest possible viewership demands, delivering heartily on superficial thrills. Blood and gore and sex come in abundance, complete with passable CGI and an optional 3-D presentation, but Nispel offers very little by way of purpose.

From the film’s first moments when Morgan Freeman’s voice offers up establishing narration, the audience knows the filmmakers haven’t put much effort into their production. This is not to suggest that Freeman is a poor narrator; simply that his overexposure as a narrator has become an ongoing joke, and now it’s impossible to take his voice seriously. Freeman tells us about the feudal lands of the Hyborian Age, a fictional period where CGI cities stand tall in the distance and despotic warlords search for the means to rule. Khalar Zym (Stephen Lang, from Avatar) seeks out pieces of an ancient mask that, when assembled, will give its wearer godly powers. The last piece resides in a Cimmerian village. This is the birthplace of Conan, who was born on a battlefield when his pregnant mother was slain and his father (Ron Pearlman) cut the child from her womb. The film’s sole note of believability is that a child raised by the massive, gristly Pearlman might grow up to become a brutal warrior.

In youth, the young Conan (played by Leo Howard) shows great promise as his father teaches him the ways of his battle-hungry people. But all is lost when Khalar Zym’s raiders take Conan’s village, kill his father, and find the last piece of the crucial mask. Of course, Conan survives and some fifteen years later (now played by Jason Momoa) he’s still seeking revenge. Eventually, he catches up with Zym, who uses his sorceress daughter, Marique (Rose McGowan, corny as ever), to find a sacrificial “pureblood” and complete the dreaded ritual to become a living god. Said pureblood is Tamara (Rachel Nichols), whose only notable trait is that she is to be fought over by Conan, who beds her, and Zym, who wants her body as a vessel for his dead wife. Conan and Zym talk it over and decide to put aside their differences through a peaceful, nonviolent resolution. No, not really.

It should come as no surprise that Nispel, whose track record also includes excessively gory remakes of The Texas Chainsaw Massacre and Friday the 13th, uses bloody violence like a painter uses gesso, building his story from a base coat of red. Throughout, waves of seldom broken swordplay, bodies pop like overstuffed mosquitoes, spurting as though someone had stuffed blood-filled waterballoons under their armor. One or two moments break the bloody proceedings, however, to pause for a feast with naked female drapery in the background, or for a love scene on a mound of hay (ouch). But before long, it’s back to merciless violence punctuated by a vocabulary of one-liners and altogether limited dialogue.

Momoa, who has appeared on Stargate: Atlantis and HBO’s Game of Thrones, fills his role well enough—without an Austrian accent, at least—and delivers Conan’s lines better than Schwarzenegger ever could. Not that such one-note characters have anything significant to say. Like Schwarzenegger, Momoa is merely an assemblage of muscles doing the bidding of his director. But Milius built Schwarzenegger’s Conan with weighty drives, whereas Momoa never stops rushing from here to there, sword in hand, playing the invincible superhero in clumsily shot action sequences. This is an adventure movie with swashbuckling and gratuitous carnage, and Nispel has no greater aspirations than that. When Conan’s father dies, it’s unaffecting; when he finally makes love with Tamara, there’s no sense of released anticipation; when Khalar Zym and Marique get their due, we shrug and move on.

The B-level production values present a paint-by-numbers script and lacks genuine enthusiasm for the material. Rather than a heartfelt adaptation of Howard’s texts, the writers (Thomas Dean Donnelly, Joshua Oppenheimer, and Sean Hood) adopt the names of characters and places for little else than name-brand recognition, delivering a barbarian exhibition of mindless violence. Without a pulse to justify its existence, this new version of Conan the Barbarian reeks of lazy filmmaking. Lionsgate saw an opportunity to rehash an established property, and instead of following the current trend of dramatically substantial franchise reboots, they whipped up a pithy yarn requiring gallons of fake blood and post-converted the filmed result into 3-D, hoping it would turn a profit. Chances are moviegoers will see through their shallow effort and the release will bomb, in time requiring yet another reboot, this one with grander intentions.