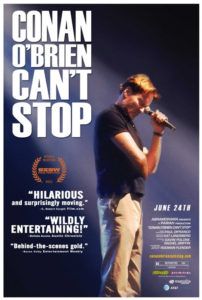 Designed as a project to blow steam and maintain public awareness for his celebrity, late night talk show personality Conan O’Brien’s “The Legally Prohibited from Being Funny on Television Tour” began in 2010, following his extrication from NBC and before his arrival on TBS. Joined by his staff of writers and sidekick Andy Richter, the tour began in Eugene, Oregon and proceeded through Las Vegas and Radio City Music Hall, ending in Atlanta after a two-month, 32-city tour. In Conan O’Brien Can’t Stop, documentarian Rodman Flender follows Team Coco along the way, providing some insight into O’Brien’s mental state during his public embarrassment and equally public reaction. And although, due to O’Brien’s hilarious, unwavering buffoonery and comedic frontage, Flender never probes too deeply into his subject’s bitterness, there are enough laughs and insight here to prove O’Brien’s dedication as an entertainer.

For those unfamiliar with O’Brien’s trials, Flender recaps via Taiwanese newscast-style computer-animation how NBC executives backed Jay Leno when he “changed his mind” about retiring from the late night talk show circuit. Network execs sought to move O’Brien’s The Tonight Show to a later time slot and fill in the space with Leno’s new show. Rather than allow himself to be the network’s rag doll, O’Brien left, accepting a massive buyout of his contract on the condition that he not appear on TV or even radio for six months. And so, taking advantage of his popularity and youth-oriented social network, he planned a massive spur-of-the-moment traveling variety show, which sold out in several cities within minutes of its online announcement. After tickets were sold, it was only a matter of figuring out what the show would entail.

Capturing several frank interviews during the planning stages, a period just days after O’Brien’s unpleasantness with NBC, Flender films the star admitting his anger over the situation, but also how performing provides him an outlet for that energy. Comments from O’Brien’s staff of writers and supporters suggest that performing—uninhibited by TV censors—onstage is raw as O’Brien has ever been, and the closest to the man’s natural energy as an entertainer. He plays classic rock songs with Jimmy Vivino’s band and his newly hired backup singers, he performs comedy bits with big-name guest stars (such as Jim Carrey, Jack Black, Stephen Colbert, and John Stewart), and he jabs at NBC much to the crowd’s delight. Still, even after channeling his frustrations into performing several shows, he’s harboring enough angst to improvise receiving a telegram from Leno asking, “What’s it like to have a soul?”

Backstage or during rehearsals, Flender shows O’Brien’s signature silliness as he degrades his staff all in good fun. One writer is the victim of several mild beatings, while O’Brien refuses to permit his assistant, Sona Movsesian, to speak unless it’s through a banana telephone. Meanwhile, O’Brien comes dangerously close to exhaustion, putting himself through endless mandatory after-parties, schmooze sessions, and interviews despite prior grumbling that he’s running out of energy or that he must preserve his voice. As the title indicates, Flender’s camera observes O’Brien’s almost self-destructive drive to entertain and better himself as an entertainer, be it in front television and arena crowds or indulging every doting fan who wants an autograph. But the rewards are worth all his suffering. On television, his connection with millions of viewers is disconnected, whereas his tour supplies him with a cheering horde who paid good money to see Conan O’Brien perform; that responsiveness feeds, and feeds from, his energy onstage.

Fans of O’Brien should seek out Flender’s little doc, either in its limited theatrical release or video-on-demand distribution; you could even survive waiting until home video, as there’s not much must-see material here—just lots of consistently funny antics. Those unconvinced by O’Brien’s brand of humor may deem this filmic appreciation of too little substance. An understandable reaction. This is not a great documentary, just a very funny one. Aside from one or two candid moments, the director never catches O’Brien’s serious side, if one exists. Certainly, Conan O’Brien Can’t Stop feels at times like an extended behind-the-scenes look at the star’s zany method. Funny as that may be for us fans, it leaves everyone else indifferent. Then again, with his tour, O’Brien doesn’t begin his journey with the fans in mind, even if it ends up being for them. He does it for himself. And you know what? He deserves it.