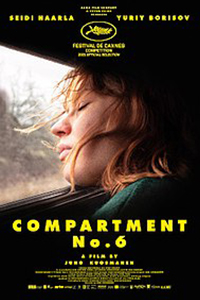 If someone asks what you had for lunch, and you reply that you had “a sandwich,” you may do the meal a disservice. Everyone knows what a sandwich is, of course. But it could’ve been anything: peanut butter and jelly, grilled cheese, Ruben, egg salad, Croque monsieur, bacon du bedat, bánh mì, or a BLT. I still have fond memories of a local (now closed) Ukrainian deli that served the descriptor-free “Sandwich”—a soft hoagie loaded with mysterious and bologna-like smoked meats, cheddar cheese, mustard, mayo, and the finisher: Koreiskaya Morkovka, which is Russian for “Korean carrot”—and it was delicious. This is my long-winded way of illustrating that, when I describe Compartment No. 6 as a road movie about self-discovery, something you’ve no doubt seen many times before, that doesn’t begin to explain this complex little film. As is often the case with familiar genres, it’s not the label that matters; it’s the particular ingredients and how they’re arranged in relation to one another. What works so well about this Finnish and Russian co-production, based on Rosa Liksom’s 2011 novel, is that it operates inside and outside of conventions at the same time. Chances are, you’ve seen this sort of story before, but you’ve never seen it quite like this.

The film opens in Moscow in the late 1990s, where Laura (Seidi Haarla), a Finnish university student fluent in Russian, lives in a flat with Irina (Dinara Drukarova), a professor. They had planned to visit Murmansk together to see the petroglyphs at Lake Kanozero in the Russian Arctic, but the noncommittal Irina backed out. Laura will go alone, and ponderous shots show her inside her head, questioning her solitude in her current relationship. She boards a train and discovers she’ll be sharing her compartment with a Russian man, Ljoha (Yuriy Borisov), for the days-long trip. But their first interaction does not bode well for the rest of the journey: Ljoha drinks, makes a mess, shouts about Russia’s greatness for beating the Nazis and going to the Moon, and then propositions Laura. He might be too much to bear, but after she contemplates taking a different train, she resolves to stay. It’s a choice that may make you question her motivations and wonder if she’s self-destructive or just trapped. Or maybe she’s just testing herself.

Compartment No. 6 unfolds over several days of testy interactions and begrudging conversation. Although Laura remains guarded, Ljoha has no one else to talk to, and he insists on asking questions and trying to understand her. As a fledgling intellectual, she seems quick to dismiss him, not only for his behavior but because he works as a miner. They both have prejudices based on education. He can’t imagine why anyone would want to look at old rock drawings. Still, as the days pass, they share meals and smoke. During an overnight stop in Petroskoi, he invites her to drink at his kindly grandmother’s place. With no other options, Laura agrees. They get drunk and toast to “your inner animal.” Ljoha continues to be rough around the edges yet surprisingly sensitive. When a Finnish drifter (with an obnoxious habit of twiddling on his acoustic guitar) joins their car on the train, the dynamic changes. Ljoha, who cannot understand Finnish, becomes quiet and jealous of the drifter, who does not speak Russian. In the middle, Laura sees the animosity between the two men as a product of their language barrier, and we see a microcosm of how languages sometimes prevent human beings from relating to one another. 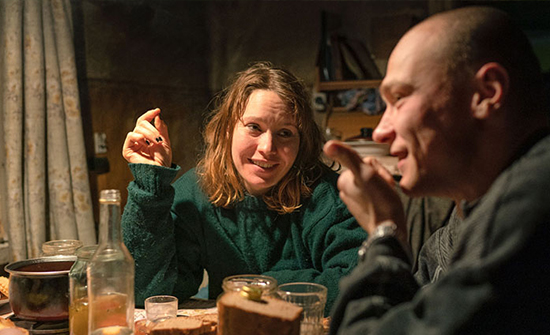 Finnish director Juho Kuosmanen, who co-wrote the screenplay with Andris Feldmanis and Livia Ulman, handles the material with an eye toward authenticity. Cinematographer Jani-Petteri Passi shoots using handheld camerawork, which is further accentuated by using actual locations and capturing footage inside real moving trains. There’s a wobbly immediacy to the filmmaking and how Passi keeps the camera on Laura’s face, following her through the train’s cramped spaces and forcing the audience to identify with her subjectivity. Haarla’s face is rarely not onscreen. When it isn’t, some of what we see comes from Laura’s handheld digital camera, which captures grainy images of the Russian landscape out the train window. There’s a sense of searching in the camerawork that reflects Laura’s exploration of self, and Haarla’s performance reveals a character who remains unsettled and unformed, closed off at first, and gradually willing to connect.

The impetus of Laura’s trip to see the petroglyphs rests on the notion that “to understand the present, you have to know the past.” Laura thinks these ancient images will somehow be the key to understanding herself. As viewers accustomed to the road movie structure, we know the film’s lessons aren’t about the destination but the journey. So many road movies feature characters who set out for a particular reason but, upon achieving it, feel empty. When she finally arrives in Murmansk, and Laura discovers that the road to the petroglyphs is closed for the winter, she’s confronted with the reasons for her journey. The affecting and often uneasy moments of bonding between Laura and Ljoha become alive and vital. For their part, Borisov and Haarla give touching performances, making their complex friendship an unlikely development. Would they ever have been willing to relate to one another if they had not been trapped on a train together for several days? Likely not. But with enough time and empathy, people will find ways of relating to each other. The fast-paced nature of life rarely allows for that.

Compartment No. 6 debuted in 2021 at the Cannes Film Festival, where it won the Grand Prix. This is the second feature by Kuosmanen, whose The Happiest Day in the Life of Olli Mäki from 2016, also won a prize at Cannes. In both cases, his films were shortlisted for the Oscar for Best International Feature but were not nominated. Here, Kuosmanen delivers a film that endears the viewer to its naturalistic characters and distinct setting, using a Hollywood narrative structure in a way that will feel familiar but different to the average viewer. Appropriately, it starts out uncertain and nebulous like Laura, but gradually, the story comes together in a feel-good finale. If it’s somewhat disappointingly conventional by the end, the ingredients have a striking and textured flavor that turns otherwise standard material into a welcomed variation. And given Russia’s recent invasion of Ukraine, watching a film like this feels weirdly germane. It yearns for people to connect, despite their differences or preconceived notions about one another. That deeply felt theme seems vital at the moment.