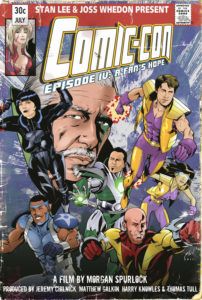 Morgan Spurlock, hipster documentarian of Super-Size Me and The Greatest Movie Ever Sold, takes a tender yet distanced look at the San Diego comic book convention in Comic-Con Episode IV: A Fan’s Hope. When visiting the Con in 2009, Spurlock met Stan “The Man” Lee, Marvel’s co-creator (along with Jack Kirby and Steve Ditko) of Spider-Man, the Incredible Hulk, the Fantastic Four, the X-Men, and the Avengers. Lee suggested Spurlock make a documentary about the convention and, never able to pass up an opportunity for mainstream exposure, Spurlock shot his footage the following year. Though he does not appear in the film (a Spurlock first), the director captures all the expected nerdisms (dressing up like superheroes, obsessive collector mentalities, etc.), but he also pins down what makes the event such an important one for its attendees, all in a spirit comparable to Trekkies (1997).

There’s a big difference between this film and Roger Nygard’s doc about the Star Trek craze, however, and it’s how fanboy-isms have since had a strange emergence into the ordinary. Years ago, fans may have represented merely a small gang of freaks and geeks, but now they’re the predominant demographic to which Hollywood focuses much of its energy. Trekkies explored the oddity of a subculture, whereas with the emergence of superhero movies and video games into the height of pop culture, what was once a signifier of a social reject now denotes relatively standard behavior. Major film studios, toy companies, comic labels, and, of course, Lucasfilm all spare no expense to promote the coming year’s projects with expensive displays, star-studded panel discussions, and exclusive material at the Con, which gathers more than 130,000 attendees each year.

Spurlock follows a cross-section of aspiring comic illustrators, costume designers, and comic salespeople, cutting these stories against interviews with visiting celebrities (Joss Whedon, Seth Rogen, Harry Knowles, Paul Dini, Seth Green, and others). Eric Henson and Skip Harvey each bring their portfolios in hopes of becoming comic illustrators; Holly Conrad and her group of friends have designed a (rather impressive) dramatization based on the videogame Mass Effect for the convention’s masquerade competition; Denver-based comic salesman, Chuck Rozanski of Mile High Comics, frets over the convention’s downturn of comic sales over the years. Rozanski hopes to save his ailing business by selling a prized item, a near-mint copy of Red Raven no. 1 with a price tag of $500,000. In one particularly cute story, Spurlock follows a young guy who has prearranged to propose to his clingy girlfriend at Kevin Smith’s Q&A session; it’s a genuinely joyous moment for everyone involved.

Let me admit something to you, the reader: I have never been to the San Diego Comic-Con. In my younger days, I collected comic books, and in Minnesota, where I live, comic conventions are few and far between. Back when Wolverine and X-Men posters still covered my bedroom walls, the hottest convention in the Twin Cities took place at the shabby former Thunderbird Hotel near the Mall of America. It was an annual event where fans like me could find a rare action figure or back issue missing from the collection. But this modest convention was also an overcrowded mess. People may not have dressed up, and there weren’t many celebrities to sign autographs, yet I still felt it was congested beyond comfort. That being said, every year, I think to myself, Wouldn’t it be great to attend Comic-Con? Another part of me knows my resistance to crowds and standing in lines would spoil the experience.

Spurlock’s movie confirms my resistance, as he shows fans waiting for hours in lines as Security wands their painted foam weapons, just in case that Klingon bat’leth is real. Then, all at once, they allow a cluster to enter. It’s a mad dash for the doors into an enormous room filled with displays from Hollywood studios, toy vendors, videogame designers, and the rare comic retailer. People donning homemade outfits, with a prevalence of Storm Troopers and scantily clad young women in revealing costumes, fill the halls. A toy collector sprints to the Hasbro counter for a limited edition Galactus figure, with little regard for anything or anyone else. What Spurlock doesn’t explore—and I wish he would have—is how expensive the Comic-Con proves to be. Tickets cost about $100 for a basic weekend pass (not including panels or other such events), plus hotel costs. And good luck finding a hotel room within fifty miles of the Con that weekend.

At any rate, Spurlock’s film investigates how the convention has changed from a few banquet tables strewn with comic books to a major event for many industries. Now, celebrities ranging from Leonard Nimoy to Harrison Ford make appearances, while comic sales gradually decline. At one point, the owner of Mile High Comics bemoans how George Lucas owns the loading dock, making it impossible for smaller vendors to load their inventory in any kind of practical approach. Though the documentary admits the Con has “gone Hollywood” in a significant and unfortunate way, it emphasizes the spirit of community surging through rooms filled to the brim with social outcasts who, surrounded by their own, feel at home.