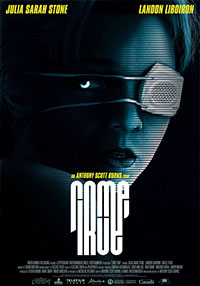 “Don’t you ever feel like you’re seeing something that you’re not supposed to?” That’s the question in Come True, a stylish horror film from first-timer Anthony Scott Burns, who wrote, directed, shot, edited, and provided music for this Canadian production, distributed in the U.S. by IFC Midnight. Burns also contributed to the film’s haunting special FX sequences, which propel the viewer into the creepy realm of our dreams—segments filled with doorways, floating columns, disjoined figures, and surreal patterns that together look like the nightmares of Odd Nerdrum set in Silent Hill. People often see similar imagery inside these worlds: dark figures with glowing eyes looming over us as we sleep. It’s ripe material for horror and familiar for countless unrelated victims of sleep paralysis—the subject of Rodney Ascher’s eerie documentary The Nightmare (2015). Burns uses the material as fodder to build an atmosphere of dread, but his touches lead to a disappointing finale that’s bound to split the audience.

Julia Sarah Stone stars as Sarah, an 18-year-old who, for reasons never explained, refuses to sleep in the same house as her mother. She’s first seen waking from a dream on a playground slide, wrapped in a sleeping bag. Saddled with bags under her eyes, Sarah needs a place to sleep when she’s not drifting off in high school. She submits herself to a two-month sleep study, a paying gig that finds scientists not only observing her brainwaves but the images seen in her mind’s eye. We see them as a series of flowing passages, moving through corridors and desaturated spaces until each dream confronts a boogeyman inhabiting her mind—though it’s unclear if it’s a figure shrouded in shadow or a shadow figure. You decide which is scarier. Night after night, Sarah’s dreams and her physical responses become more intense, leading to blackouts and panic attacks during the day.

There’s something else going on, too—something that raises questions about the experiment’s scientific integrity. One young technician, Jeremy (Landon Liboiron), seems preoccupied with Sarah’s mind, and his light stalking suggests he’s willing to go outside of the experiment’s established boundaries to learn more. Burns never quite makes Jeremy answer for his breaches of ethical boundaries; rather, he’s rewarded for his obsessive behavior with an unconvincing romance. This, along with Burns’ cryptic chapter titles—such as “The Persona” and “The Anima and the Animus”—make Come True feel like Sarah isn’t in control of her own story. Instead, she’s a subject observed through Burns’ cool-toned cinematography, measured pacing, and often staid camerawork. Fortunately, Stone’s terrific performance draws the viewer to her paranoia, even if the film’s perspective remains inconsistent.

Besides dreams, Come True’s other major motif involves a somewhat elusive touch of nostalgia, evidenced in posters for Weekend at Bernies (1989) and The Terminator (1984); the droning synth score by Electric Youth and Burns, under the name Pilotpriest; and the scientists’ archaic-looking video equipment. Particularly oppressive is the music, which recalls something by Tangerine Dream and overtakes the mood of an ‘80s-style sex scene (think Sarah Connor and Kyle Reese). The presence of smartphones confuses our impression of the period. The approach recalls David Robert Mitchell’s It Follows (2014), another horror film that seemed strangely outside of time, familiar but not so much to call it a pastiche. But then, a lot of horror movies these days embrace the referential, vaguely ‘80s aesthetic found here. See Slice (2018), Mandy (2018), Sweetheart (2019), Color Out of Space (2020), Possessor (2020), and many others for a similar treatment. In a few years, the style has gone from charmingly familiar to overdone.

A last-minute plot point might serve as reasoning for Burns’ stylistic choices. It might also be one of the most ill-advised twists in recent movie memory. For most of the 105-minute runtime, Come True is a slow-burning descent into the unconscious mind and the “natural function” of people seeing shadowy figures in their sleep. But Burns also wants viewers to question the nature of the reality he shows to us, hinted when Sarah considers buying a paperback by Philip K. Dick—an author who questioned perception and reality in imaginative ways. Dick’s books often hinge on a single science-fiction concept and explore that to its limit. By contrast, Burns suggests he’s investigating one idea, namely dreams, but pulls an unnecessary switcheroo at the last minute, revealing that he’s been investigating something else entirely. It’s a bold move that doesn’t work dramatically, and it feels like it should have been a transition into the fourth act instead of the conclusion.

As a result, Come True feels more like an extended episode of The Twilight Zone than a feature film, regardless of its length. It delivers a significant reveal, and then the credits start to roll, suggesting the filmmaker has no interest in surveying the new world he’s just introduced, nor the implications on his main character. Viewers will either embrace the tactic or, as I have, feel underwhelmed that the story didn’t lead to something either more ambiguous or more emotionally fulfilling. Doubtless, Come True will inspire horror and sci-fi fans to pore over the details throughout, looking for clues that anticipate the ending. Still, before that moment, Burns commands an entrancing production that shows a confident, talented filmmaker at work. Here’s hoping that he points his skill in a direction more stylistically original and dramatically satisfying for his next project.