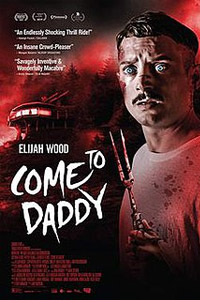 Approaching this review of Come to Daddy, I realize it isn’t something I want to write about at all; it’s something I want you to watch, and after you see it, I want to talk about every detail with you. Describing the plot will spoil the fun you would have discovering the many twisted developments and freaky curveballs that occur over the brief, albeit exhilarating 93-minute runtime. It reminds me of the 2008 horror movie Frozen, where three young people find themselves trapped on a ski lift for several days; Adam Wingard’s The Guest (2014), where a family is visited by a soldier who served with their fallen son; or the underseen One Cut of the Dead from last year, about a low-budget film crew whose zombie movie is invaded by real zombies. These titles have a relatively predictable logline, but they unfold to reveal something far more complex and unexpected, in some cases more terrifying, and certainly genre-defying. With that in mind, Come to Daddy is such a movie, where I will explain the basic setup and say little more, and from there you will make all sorts of assumptions about what comes next. Whatever you think is going to happen, however, you’re probably wrong.

Similar to the above-mentioned titles, the success of Come to Daddy depends on what you know about it beforehand. If you have absorbed reviews, synopses, or interviews with the filmmakers, you may have already learned too much. With that in mind, it might be a good idea to stop reading and see it, even though I have no intention of divulging its biggest secrets. It’s a film whose humor and thrills depend on its shock value, its ability to lead one way and then turn another in an instant. But it never resorts to randomness for the sake of its effect on an audience. Screenwriter Toby Harvard follows a disturbing story logic that implants indecipherable hints at what might be around the corner, yet he never gives away what’s coming, even as the film approaches its final scenes. When new information comes to light, it bewilders and terrifies without stopping for a “Now what?” moment. Come to Daddy is a propulsive film that punctuates itself with jolts of story, gristly violence, and often riotous dark humor.

Elijah Wood, whose production company SpectreVision made the film, plays Norval Greenwood, a hipster with a goofy mustache and bowl haircut just idiosyncratic enough to make him vaguely stylish. Responding to a letter written by his long-lost father, Norval follows a veritable treasure map to an isolated bus stop where he must journey through woodlands to a remote beachside home that looks “like a UFO from the 1960s.” He knocks on the door and his dad (Stephen McHattie), whom Norval hasn’t seen since he was very young, answers, his face weathered and eyes paranoid. Norval, who has spent the better part of his life in Beverly Hills with his mother, discovers his father is a hermit and heavy drinker, the sort of man who likes unsanded wood walls and fight stories. Still, Norval seems desperate to make a connection, though he quickly learns the wrong approach by trying to impress his father with stories about his pop-music career. 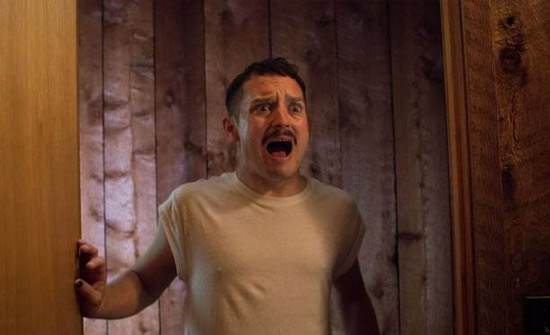 As Norval tries to figure out why his father invited him to the house in the first place, McHattie’s character makes it clear that they won’t be making up for lost time. He’s not above humiliating the sensitive young man, who is mocked for his issues with alcohol dependency and his gold “designed by Lorde” smartphone. Before long, strange details begin to emerge: Norval hears heated telephone conversations coming from his dad’s bedroom at night; looking out the window, he glimpses someone in the woods looking back at him; and there’s the ominous way the moonlight illuminates the word “kill” on his father’s apron in the kitchen. The unspoken tension between the reunited family members comes to a head, eventually, and that’s where the first act gives way to another film entirely. It would be a shame to say any more, except that Harvard and Wood have created a protagonist who deepens through the proceedings, making the film ripe for a second viewing.

New Zealander Ant Timpson makes his feature-length debut as director of Come to Daddy after serving as a producer on The ABCs of Death (2012), Turbo Kid (2015), and The Greasy Strangler (2017). That gruesome roster should indicate the kind of material that follows, complete with humor sometimes deviating into the gristly and perverse, including some nasty moments involving a meat fork and plastic wrap. The tone recalls early Peter Jackson, such as Dead Alive (or Braindead, if you prefer, from 1992) and The Frighteners (1996), where the brushstrokes may appear broad and slathered on with copious use of the color red, but there’s also an unexpected tenderness. Timpson expertly ratchets the tension with one situation after another, yet it’s Wood’s presence, and those “kind eyes” of his, that allow Come to Daddy’s most outlandish moments to feel intertwined with Norval’s search for a long-absent father figure.

If most of the major plot surprises in Come to Daddy arrive in the second act, the slower last half-hour may be no less deranged, just less unexpected. But it’s all more moving than you would expect. The appearance of characters played by Michael Smiley and Martin Donovan allows for Wood’s protagonist to learn more about his past and the multifarious reasons for his trip. Norval’s desperation and loneliness are a crucial component in making every new wrinkle feel believable instead of a genre flourish, leading to a pitch-perfect last shot. Still, it has elements of a thriller, neo-noir, and borderline psychedelic horror show, but it’s more cohesive and substantial than, say, 2018’s instant favorite Mandy. Come to Daddy should have a long life in cult crowds and midnight screenings, as it benefits from a packed house that will laugh, gasp, and groan along with you.