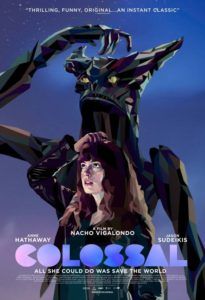 Spanish filmmaker Nacho Vigalondo has maintained his distinct approach during his transition from Spanish-language titles such as Timecrimes (2007) to his more recent English-language debut with Open Windows (2014). Indeed, the writer-director’s latest, Colossal, demonstrates his ability to defy expectations within well-worn genres by layering them with quirky twists and turns. Dark, semi-romantic comedies and kaiju monster movies find an unlikely pairing here, but the mix seems strangely appropriate for a director versed in alien invasions and time travel. Commanding some surprising performances from his leads Anne Hathaway and Jason Sudeikis, Vigalondo keeps the audience guessing, rarely allowing room to predict what’s going to happen next amid the unexpected emotional depth. However, his creative and narrative choices throughout the film prove to be perhaps too cute and desperate for hipster approval.

The basic setup of Colossal intrigues yet reeks of self-satisfied cleverness. Hathaway plays Gloria, an unemployed writer who spends every evening blackout drunk. Her boyfriend (Dan Stevens), tired of her behavior, finally kicks her out in the first scenes. With nowhere else to go, Gloria returns to her rural hometown and moves into her parents’ former house, now empty besides the air mattress she buys. She quickly reconnects with a childhood friend, Oscar (Sudeikis), who seems to have the identical drinking problem. Fortunately, Oscar owns a local bar and gives Gloria a part-time job. Together, they spend each night drinking with local barflies (Austin Stowell, Tim Blake Nelson) until the morning. When Gloria sees on the news one day that Seoul has been attacked by a giant monster Godzilla-style, she’s horrified. Only later does she make the connection that the monster seems to move in ways identical to her own movements, all at a very specific time and place: 8:05 am in a local park, which she crosses every morning as she stumbles home from Oscar’s bar. After some testing, Gloria realizes that she and the monster killing hundreds of South Koreans have some sort of connection—or rather, she somehow is the monster. Setting aside the obvious alcoholism metaphor, the plot thickens when she shows her discovery to Oscar and his bar friends.

The story becomes increasingly more complicated as it goes, but the overt symbolism remains blatant. Nevertheless, it’s clear Vigalondo is an original mind. How many films have you seen about a drunk who unconsciously controls a kaiju? Playful and innovative though the concept may be, Vigalondo delves into some heavy character development between Gloria and Oscar. Sudeikis plays against type, but not at first. He would make a perfect prototypical nice guy, except his drinking disguises the fact that he’s an embittered narcissist who has long held a crippling jealousy of Gloria. All the while, parallels to the skyscraper-toppling monster in South Korea present metaphors for the comparatively small human drama. The film always seems to be saying, Nudge, nudge. Get it? On the margins, a subplot in which Gloria sleeps with Stowell’s character seems like a transparent device to make Oscar jealous; but after this significant development, Stowell becomes a passive nonentity in the film.

Although a couple of years ago Vigalondo suggested his upcoming kaiju film would feature the guy-in-a-rubber-suit approach of classic Japanese disaster flicks, Colossal boasts a towering CGI monster and, later, a robot that each looks like rejected concepts from Pacific Rim (2013). Cinematographer Eric Kress delivers a professional looking visual presentation; this is certainly Vigalondo’s best-looking film to date. The rural sequences in the U.S. look like your average indie darling, whereas scenes in Seoul are more stylized: they take place exclusively at night, saturated in rain, neon lights, and screaming crowds of South Koreans—all of whom are dehumanized and faceless Others. Nevermind the hundreds of dead through the course of the film; the primary concern is the human drama between Gloria and Oscar.

Of course, the concept shouldn’t be taken so seriously; it’s about a drunk with a psychic or metaphysical connection to a towering monster, after all. Perhaps it’s too much to hope that Vigalondo would give the same attention to the crowds of victims crush by the fantasy sequences. But the director’s treatment of the emotions at work suggests a level of dramatic weight that feels unevenly applied to a thin hook. To be sure, everything besides the kaiju works very well. Hathaway and Sudeikis provide solid performances, especially in later scenes when their characters are pushed to desperate limits and resist falling into typical roles. At the same time, their roles are undermined by the film’s central device, which ties the entire scenario together with an overly convenient bow that some may find clever, while others may find empty and ridiculous in the wrong ways. Despite its flaws, Colossal is unique and admirable for its ambition, making it even more disappointing that it fails to put its concept and characters to better use.