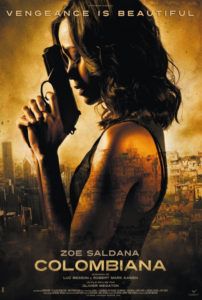 The conveyor belt in producer Luc Besson’s action movie factory delivers at least one mindless shoot-em-up per year. Occasionally, the yield of dull titles like From Paris with Love is broken up by something as entertaining as Taken, but not often. Colombiana exists as midrange action product, with reasonable star power, lots of momentum, even more violence, and heaps of sex appeal, all tempered for mass consumption by a PG-13 rating. Co-written by Besson and Robert Mark Kamen, the movie was directed by Olivier Megaton (Transporter 3), one of Besson’s clan who has yet to break out the way Pierre Morel (District 13) has. Here, Megaton rushes through a story that deserves comparisons to Besson’s own The Professional.

After witnessing the murder of her mother and Columbian drug lord hitman father by the hands of competitor Don Luis (Beto Benites) and his goon, Marco (Jordi Molla), the 9-year-old Cataleya (Amandla Stenberg) escapes in a mediocre parkour chase sequence on the rooftops of Bogota. She makes her way to Chicago and takes refuge with her uncle Emilio (Cliff Curtis), a gangster who values family. She insists on getting revenge and that Emilio train her to be a killer, and he agrees on the condition that she goes to school. Cut to 15 years later, by which this time Cataleya (now played by Avatar star Zoe Saldana) has accumulated a hit list of twenty or more kills—all very bad people, and all meant to draw out Don Luis, who has since gone into hiding under CIA protection.

A normal life with her casual boyfriend Danny (Michael Vartan), who until recently she has used for sex, never seemed feasible. But suddenly Danny wants to talk and Cataleya begins to feel something beneath her cold exterior. Uh-oh. Meanwhile, flavorless FBI Special Agent Ross (Lennie James) is hot on his suspect’s trail, but refuses to believe the killer is a woman, because no woman could ever do what this killer has done. (Clearly, Agent Ross hasn’t seen Besson’s La Femme Nikita or The Fifth Element.) But he’s got to find the killer, because that’s what FBI agents do, so he asks the press to distribute her signature: a Cattletya orchid drawn on each victim’s chest in black lipstick. When Don Luis sees this, he sends out his thugs to search for Cataleya, putting her few dear associates and family members in harm’s way.

Saldana makes a fine replacement for Besson’s other action heroes, the likes of Jason Statham and Jet Li: actors whose scowls are interrupted only by bursts of anger. She’s nimble and cat-like, infiltrating complex security with the sly daring of Tom Cruise in Mission: Impossible, while she can also unleash Hell worthy of Schwarzenegger in the finale’s Commando-style shootout. But rather than question the morality of her cold-blooded killer, Megaton orders Saldana to shed a few tears and morally redeems her character through emotion. She is, after all, a woman, and therefore subject to movie stereotypes such as sentimentality. But Besson did not choose a female protagonist solely to show a sensitive side, despite a number of sappy scenes involving Cataleya’s family and boyfriend. The movie’s “sexy chick with guns” concept reaches its height when the protagonist escapes an FBI raid with little more than her undergarments and a massive assassin’s rifle.

The only obvious cliché missing from the overcooked Colombiana is an androgynous female villainess to rival Saldana (in the 1980s, such a role would have been played by Brigitte Nielsen). Though he avoids this bit of formula, there aren’t too many other clichés Megaton (a ridiculous self-appointed moniker) doesn’t employ. Action scenes adopt that familiar, over-edited, shaky-cam style that has spread like a disease through the majority today’s action movies, and cuts have a Man on Fire strobe effect that might cause an epileptic seizure. Everything that you expect to happen does, but the result is certainly more watchable than the majority of Besson-produced actioners, and will no doubt provide some mild diversion for action junkies.