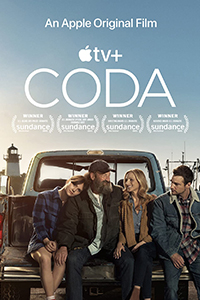 CODA checks a lot of boxes. Being about the hearing child of deaf adults, the movie shines a light on a group of people often underrepresented in cinema. The script, written and directed by Sian Heder, achieves this through a mix-and-match of familiar story beats. It’s part coming-of-age romance, part high school singing competition, and part oddball family movie. Not one of these modes proves original, nor does the way Heder blends them together. Still, Heder captures deaf and CODA experiences with a memorable personality, even if the overall structure of her movie is predictable. The individual performances from deaf actors and an impressive turn from star Emilia Jones pull the viewer through the slog of typical Big Moments. Obligatory scenes of will-they-or-won’t-they romance, a concert, practicing montages, a fateful audition, and a run-back-to-the-family goodbye all seem like textbook inclusions. Fortunately, the writing and acting elevate it.

A remake of the 2014 French-language film La Famille Bélier, Heder’s version follows Ruby Rossi (Jones), a hearing teenager from Gloucester, Massachusetts. Since she was very young, Ruby has been a translator for her family of deaf, blue-collar, small-town fisherpeople. She interprets for her parents, Jackie and Frank (Marlee Matlin and Troy Kotsur), even in the most intimate of situations. For example, one scene finds Ruby having to hear about her parents’ shared case of jock itch from a doctor—mortally embarrassing for any teenager. But then, the Rossi family has few inhibitions to comical effect. Ruby’s sexually active parents don’t hide their enduring affection, and her older brother (Daniel Durant) doesn’t mind sharing his Tinder selections at the dinner table. Like any other family, they bicker and tease, signing insults like “shit face” and “twat waffle” at each other casually. But they also rely on each other to maintain the family’s fishing boat business.

A few wrinkles in Ruby’s life lead to predictable conflict. She joins the school choir to get closer to her crush, Miles (Ferdia Walsh-Peelo, from Sing Street), revealing that she has a beautiful voice to her unsuspecting class. Her family, of course, couldn’t have noticed. Fortunately, the movie’s larger-than-life music teacher, Bernardo (Eugenio Derbez), inspires Ruby to pursue her dream of singing and attending Berklee College of Music. But this creates tensions at home since running a fishing boat requires someone who can hear. If Ruby leaves, her family’s business may be in jeopardy. Jones, from the Netflix series Locke & Key, manages to convey her character’s torn quality. She’s at once liberated by singing but committed to her family. If she pursues her passion, her family might not be able to function. Part of the reason is that they use her as a crutch, relying on her free labor to keep them afloat in a hearing person’s world. But, of course, just as Ruby finds her independence, so will her family. 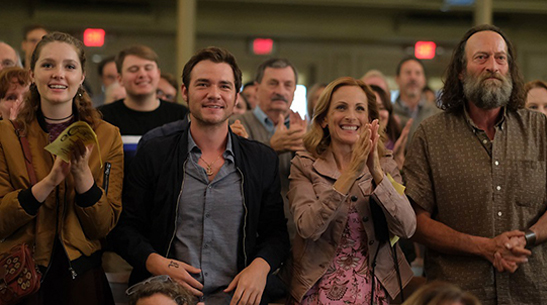 After its debut at the 2021 Sundance Film Festival, CODA made headlines for Apple’s record-breaking acquisition for $25 million. And why not? In many ways, it’s the quintessentially commercial-friendly Sundance movie. It’s conventional enough to sell but looks just quirky enough to appear different, and therefore bound to earn the Apple TV+ streaming service a few subscribers after its brief theatrical run. Like other festival favorites from Little Miss Sunshine (2006) to Captain Fantastic (2016) to The Farewell (2019), it concentrates on an idiosyncratic family that, upon closer inspection, demonstrates how particular family dynamics are universal regardless of their unique culture or disability. Different, but the same—that’s what Sundance success is all about these days.

And so, most people will watch CODA at home on Apple TV+. Luckily, it looks great on a big 4K television. Cinematographer Paula Huidobro shoots vast oceanscapes in magical light that looks luminescent and transportive (far more than the digital grime of the platform’s most recent ocean-bound venture, last year’s Greyhound). The real treat here is the acting, particularly the tender moments between Ruby and her family. Since much of their communication is limited to sign language (translated in subtitles), the actors give expressive facial and physical performances. At one point, Ruby’s father performs a hilarious pantomime to Miles about using a condom. Behind his bushy beard, Kotsur has a wiry and brash screen presence that, inevitably, melts away into a tender-hearted character. Elsewhere, Ruby cannot express to Bernardo through verbalizations how singing makes her feel, and so she signs it, and the effect is unmistakable.

“You’re the girl with the deaf family?” asks Bernardo early in the movie. “Everyone but you?” he adds. Ruby nods. “Interesting,” the teacher observes, then moves on with his instruction. Hearing dialogue like this, you get the sense that Heder said the same thing after seeing La Famille Bélier. Viewers, too, will no doubt respond with similar curiosity and mild interest. Only occasionally, when Heder resolves to remove the sound and place the viewer in the family’s perspective—most emphatically during a pivotal duet—does the movie feel like it’s not just fulfilling the audience’s needs. At this moment, we finally understand what the Rossis are missing and what that means to Ruby. The rest of the time, CODA is admirably made but conventional storytelling. Regardless, it’s difficult to deny the movie’s crowd-pleasing appeal or ignore how well it works despite its unremarkable construction.