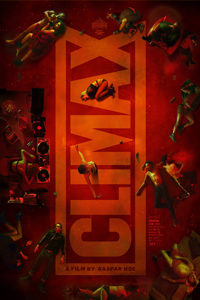 Of course the fifth Gaspar Noé film is called Climax. The very word bears associations that provoke and suggest in the naughtier corners of the mind. The Paris-based Argentine director depends on our interest in taboos and transgressions of so-called good taste. Noé invites that curiosity with every film, like a giggling schoolboy who has set a whoopie cushion on a chair and can barely contain his laughter as someone approaches to sit. Except, instead of an amusing fart noise, Noé has prepared a debauched and confronting assault for the viewer, and he wants everyone to know it. Most of the promotional material for his films contain disclaimers that viewers will be offended. It’s a conceit that goes back to schlockmeister William Castle, the king of gimmicks who once asked audience members to sign an insurance waiver before seeing his forgettable work of B-grade horror, Macabre (1958). Similarly, Noé’s debut I Stand Alone (1998) featured a warning: “Viewers are advised that this film contains scenes of graphic sex and violence.” It’s both a caution and a promise, and it applies to each of his films.

Purportedly based on a true story of real events that took place in 1996, Climax follows a newly formed troupe of dancers who inadvertently drink LSD-spiked sangria and descend into various waves of psychedelia—from the initial dizzying elation to the paranoid, psychosexual, and destructive impulses that follow. Before any of that, Noé has structural games to play. He begins at the end, showing us the final scene in a bird’s eye view shot. A solitary, blood-soaked woman trudges through the snow, screaming, until she falls and, in her writhing in the cold, shapes a red-accented snow angel. This ominous opening is followed by the end credits, which roll on the screen in a colorful and speedy procession. After that, Noé presents several taped interviews with the troupe on an old television set surrounded by stacks of books and VHS tapes on extreme subjects. Copies of Pier Paolo Pasolini’s Salò, or the 120 Days of Sodom (1975) Dario Argento’s Suspiria (1977), and Andrzej Żuławski’s Possession (1981) are stacked alongside books such as Fritz Zorn’s Mars (1977), surrealist Luis Buñuel’s autobiography My Last Sigh (1982), and the suicide guidebook by Claude Guillon and Yves Le Bonniec.

This reference material gives us some idea of what’s to come, eventually, but things start out promisingly enough. A thumping, dizzying display of performance art and dance puts Climax into gear, and the viewer cannot help but feel themselves lost in the choreography and almost uncanny body movements of the nearly twenty dancers. Cinematographer Benoît Debie shoots in long sequences pieced together using digital adhesive, the camera moving up, over, into, and around the dancers in their hypnotic movements to rather excellent music (Aphex Twin, Giorgio Moroder, Soft Cell, Daft Punk, Neon, Dopplereffekt, etc.). The dance hall where they rehearse is a vast open space painted in the dingy, crimson reds that recall the notorious hallway from Noé’s Irréversible (2002), with an appropriate sense of foreboding. And after the initial, incredible performance, the troupe unwinds with a modest spread. Everyone’s feeling good. Inhibitions are down. The mostly pansexual members of the group shoot signals in various directions, hoping for a hookup. But it’s also dangerous, signaled by an alarming conversation between two men that goes from anal sex to sexual assault. as well as our concern for the young boy amid the group. And before long, a dancer is alarmed to feel that “something’s kicking in” without warning—a realization that no one’s happy about.

Borrowing how The Exorcist (1973) foreshadowed the horrors that would follow (as Reagan interrupted her mother’s dinner party by peeing on the carpet), Noé creates a sense of dread when the Berliner named Psyché (Thea Carla Schott) drains her bladder onto the dance floor. From there, it’s a relentless downward spiral as the dancers handle their unplanned dose of hallucinogens with varying degrees of stability. Most of the time is spent with their choreographer, Selva (Sofia Boutella), who attempts who maintain control but remains susceptible to her share of screaming freak-outs. Worried for her son, troupe manager Emmanuelle (Claude Gajan Maull) locks her child in an electrical closet and warns him not to touch the dangerous panel of buttons. Anyone familiar with Noé’s brand of cinema, rich in the extreme aesthetic of the New French Extremity, knows the child won’t resist. The group is also quick to attack anyone they suspect responsible for the drugging. One man finds himself banished into the wintry conditions outside. A pregnant woman is beaten and kicked several times in the stomach before resorting to self-mutilation. And just when you think you can’t handle the horror, Noé draws the viewer back with more exquisite scenes of dancing.

The structural and formal playfulness on display throughout Climax is alternately engaging and annoying. The extended shots, even if they were patched together in post-production, immerse the viewer in the ensuing delusions and digressions. Noé and his co-editor Dennis Bedlow also use a rhythmic tempo to the cutting, where brief black frames mark the transition from one set of characters to another, as though their conversations and behaviors build up momentum toward the longer, more entrancing sequences. Elsewhere, the director cannot help but insert title cards that display statements like “Birth is a unique opportunity” or “Death is an extraordinary experience.” What do those declarations mean in this context? Doubtless Noé has some explanation, perhaps having to do with a general critique of drug and sex culture, though he’s hardly known for intellectualizing his films in any satisfying way—they’re foremost visceral and sensory experiences for those up to the task.

Noé is never one to shy away from scandal (he subsists on it), but Climax feels more accessible than his earlier works—comparatively so anyway—if only because it’s impossible to deny the raw exhilaration of those dance sequences. It’s certainly more palatable than his last film, the sexploration Love (2015), complete with 3D ejaculations, or Enter the Void (2009), with its shots from the perspective of various sexual organs. Not that Climax isn’t a horrific odyssey in its own unique way. There’s plenty here to disturb and unsettle. However, it’s also possible to emerge on the other side unscathed, wondering what that was all about. The non-linear conceit and its reversal of credit sequences seem almost cute next to the laughable, self-important presence of Noé’s name onscreen on several occasions, lending an empty performance art quality to the film. Strong feelings about the experience may not last beyond the initial 95-minute runtime, but it’s easy to appreciate the skill of the performers, the upside-down and fluid camera movements, and the confidence of the filmmaking, regardless of how grimy it makes you feel.