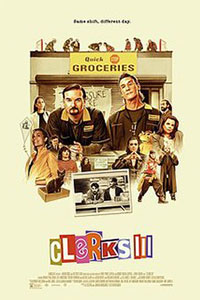 Remember Clerks? Kevin Smith does. The writer-director has built his career on the strength of his black-and-white 1994 debut—an independently produced comedy distributed by Miramax. The film turned Smith into a nerd and stoner icon by capturing the appeal of friends who spend their shifts at a dead-end job getting high, debating the finer points of Star Wars, and talking about the mysteries of relationships and sex. Throughout the 1990s, Smith’s View Askewniverse—named after his production company, View Askew, and populated by many overlapping characters—expanded with Mallrats (1995), Chasing Amy (1997), and Dogma (1999). The titles continued into the twenty-first century, including a Clerks sequel in 2006. But after helming fifteen features, it’s evident that Smith set his boundaries in Clerks and has rarely deviated from them with much success (see, or don’t, Red State and Tusk). Now, nearly three decades later, Smith returns to his origins with Clerks III, a meta send-off that treats the original’s characters with sentimentality and uses nostalgia to remind audiences of what we used to love about his work.

If my use of past tense is any indication, my relationship with Smith’s output has deflated over the years. It’s disappointing because, as a teenage boy, I considered myself a devoted Smith fan—complete with Jay and Silent Bob collectibles, various special edition DVDs, and genuine optimism about his movies and college tours. But sometime in the 2000s, between the overly self-referential Jay and Silent Bob Strike Back (2001) and the blandness of Cop Out (2010), I fell out of love with Smith’s filmmaking. Maybe I just grew out of the whole “Snoochie Boochies” thing, not to mention his endless conversations about comic book heroes and porn. I was growing up, but Smith’s movies weren’t. Before long, and with one disappointing feature after another, I stopped trying to convince myself that Smith could redeem himself. And while Clerks III doesn’t make up for the last 20 years of subpar output, it’s certainly better than his last few features.

The story finds the original two convenience store employees, Dante (Brian O’Halloran) and Randall (Jeff Anderson), now owners of the Quick Stop in their New Jersey suburb. They still complain about the clientele, organize rogue floor hockey games on the roof, and tolerate Jay and Silent Bob (Jason Mewes, Smith)—who operate the video rental and THC shop next door. Since the last time we saw them, Dante’s girlfriend Becky (Rosario Dawson) died, but not much has changed with Randall. It’s a normal day at their dingy convenience store when, while complaining to Christian Crypto Club member Elias (Trevor Fehrman) about religion, Randall suddenly drops from a heart attack. He’s narrowly saved, but after his brush with death, he confesses, “The whole movie of my life flashed before my eyes. And you know what? It sucked.” And so, Randall resolves to stop spending his time talking about movies and instead make one. 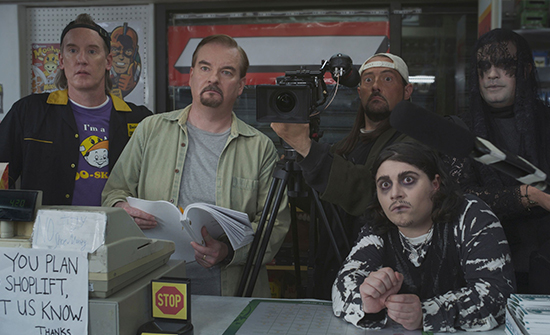 Squirreled away in his narrow apartment hovel between the Quick Stop and Jay and Silent Bob’s operation, Randal cranks out a script overnight, called “Convenience Stories.” What unfolds, then, is a making-the-movie scenario. Dante raises $25,000 for the production by asking his ex-wife (Jennifer Schwalbach Smith, from the sequel) for a loan and must also convince his ex-girlfriend Veronica (Marilyn Ghigliotti, from the 1994 film) to let Randall allude to her experience with “37 dicks” in the movie. Together, the two fledgling filmmakers shoot scenes based on events that happened decades ago. But given that Randall’s script mirrors Smith’s original Clerks, you wonder, Has nothing happened to Dante and Randall since 1994? Smith has been resting on his laurels for years, so it only makes sense that he recreates his original movie. But, even though it’s easy to be crass about his approach, Smith’s tactic of looking back through the device of shooting an independent film works well enough as a nostalgia engine.

Clerks III suffers from the usual downfalls of a Smith production, such as wooden acting, dull visuals, and no end to the dick jokes. Though, one scene explains his reasons for using black-and-white in the original—to hide the drab Quick Stop colors, create the impression of a security camera, and evoke the soullessness of their job. But there’s no explanation as to why Smith shot the sequels in color. Elsewhere, it’s clear the filmmaker is working through his personal experiences, just as Randall does. The dynamic between Dante and Randall evokes the friendship between Smith, who had a heart attack in 2018, and Mewes, who’s spent years fighting drug addiction. In an emotional scene, and probably the only moment in Clerks III that feels genuine, Dante confronts Randall about how he’s been sidelined in Randall’s movie—“Your life is my life,” he tells him. Overall, Smith tenderly grapples with mortality and friendship here, even while offering schmaltzy scenes with Dante talking to Becky’s ghost. There’s plenty of silliness too, including cameos from familiar faces (Ben Affleck, Fred Armisen, Ethan Suplee, et al.) and Amy Sedaris as a kooky doctor.

A step up from Smith’s Jay and Silent Bob Reboot from 2019, Clerks III represents the first time in a long time that the viewer can sense Smith telling a personal story. Although he sets out to, as Dante puts it, “cinematically suck his own dick,” the movie’s themes resonate. In an ironic twist, Smith acknowledges that reality doesn’t work like a movie; people have heart attacks or get cancer, and they rarely get a Hollywood ending. But in defiance of life’s limitations, people can turn their lives into a movie through filmmaking. Smith has done that for decades, and Clerks III is a love letter to that notion. Still, for all of the movie’s lessons, few of the jokes land, while Jay and Silent Bob have rarely been more superfluous. But I’ll be damned if the sentimentality didn’t win me over in the third act. When Dante watches Randall’s inevitable film, and we see shots of Smith’s Clerks, I felt my heartstrings pulled—the most Smith has made me feel in years.