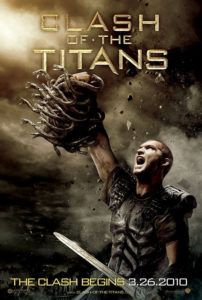 Clash of the Titans is a remake the 1981 cult classic of the same name. The original, with stop-motion animation effects by legend Ray Harryhausen, earned its status because of Harryhausen’s work on the film. And it was ripe for remaking because of its dated quality, the hammy nature of star Harry Hamlin, and the overall generic quality of the production. The creature effects, however, demand your attention, particularly the unforgettable depiction of the snake-headed Medusa. That movie knew how to incorporate fun into adventure. It’s a movie that many youths, including myself, grew up loving. But now, looking back as an adult, the adventure is rather cheesy, dated, and even insufferable to sit through. The same can be said for the remake.

But before getting into the meat of this movie, let me first make a confession to you, the reader. Warner Bros. has released Clash of the Titans in both standard and 3-D formats, and I did not see this film in 3-D. In truth, whenever there are press screenings that plan to show a movie in 3-D, I avoid them like the plague and instead see the movie on opening day in a standard presentation. This is because, in my experience, the 3-D gimmick adds nothing to the respective movie and in many cases takes away from the screen story. It’s a personal choice on my part, but I also recommend that you the moviegoer avoid 3-D, in this case specifically. The filmmakers completed shooting and then added a faux third dimension after-the-fact, making the effect lackluster, and not “true” 3-D. And though I cannot speak for the quality of the 3-D in Clash of the Titans first-hand, I can say that the majority of critics have all but exclusively centered their reviews on how terrible the 3-D device is for this film—some have even confessed to removing the 3-D glasses mid-film and tolerating the resultant blurriness just to avoid enduring the shoddy effect. Whether you’re a fan of the 3-D trend or not, know that this review is based on the 2-D version and doesn’t preoccupy itself with a 3-D vs. 2-D discussion.

That said, director Louis Leterrier, helmer of The Incredible Hulk and Transporter 2, has made a movie empty of emotions that audiences can relate to. Character motivations never extend beyond anger and revenge and spite. This temper-tantrum-of-a-movie follows Perseus (Sam Worthington) on a perilous quest to slay the Olympian gods because they killed his mother and adoptive family. To complete his task, Perseus joins forces with a legion from the city of Argos, which will be destroyed by Hades by order from Zeus for their lack of faith in the gods. Hades gives Argos an ultimatum: sacrifice princess Andromeda to the Kraken, or the monstrous elemental beast will destroy all of Argos. So Perseus sets out to discover a way to defeat the Kraken, and therein get revenge on the gods for killing his family. Curiously, he’s not so worried about saving Andromeda.

Unlike the original Greek myth, Perseus’ quest is not motivated by his love for Andromeda. Instead, Perseus has daddy issues that can only be resolved by defying the gods and proving that humans are capable of anything. Of course, Perseus isn’t quite human. He’s a demigod fathered by Zeus, which quickly explains why, after being a fisherman all his life, he’s able to wield a sword like a pro after only one obligatory training session. His hastily-found skills come in handy and impress his skeptical warrior-cohorts from Argos when they battle giant scorpions, bark men, Stygian witches, harpes, Medusa, and finally the Kraken.

His quest is understandable. The Greek gods make it easy to believe that life is unfair and the world is an awful place, whereas the Christian god makes life perplexing for those who believe in it. After all, Christians believe their god loves everyone, so when bad things happen it’s confusing as to why God would allow them to occur—hence the saying, “The Lord works in mysterious ways.” The Greeks had a better view. They saw their gods in more human terms. Every god on Mount Olympus was capable of being selfish or evil, vengeful or cowardly, shameful or brave. Human behavior makes sense when you compare it to Greek gods, whose leader, Zeus, spends the majority of his time raping mortals in animal form. Moreover, it’s easier to deem the gods cruel when they’re so humanized and therefore fallible, making things on Earth easier to explain when considering who’s in charge.

But don’t expect any commentary in the movie about gods and whether or not they should be worshiped. This story is used merely as a setting to employ computerized special FX and spend a lot of money doing so. The movie seeks to be an action picture, nothing more. Leterrier shoots on an epic scale with a surprising lack of clarity. The fights are captured with a Shaky Cam and overedited, and the result is usually indecipherable. Winged Harpes appear in one scene, but I couldn’t tell you what they look like—the editing and camerawork didn’t stay still long enough to catch even a glimpse. What’s more, the creatures are made with cheap-looking CGI, most notably Medusa, who, thankfully, is not played by Uma Thurman (see, or rather don’t see, Percy Jackson and the Olympians: The Lightning Thief). There should have been a real actress behind Medusa’s face, someone to evoke her madness. As is, Medusa is rendered with computer animation that looks stale and bland and unexpressive; videogame animation has looked better. The outcome makes what should have been the most haunting battle in the movie into the most disappointing.

But the lackluster effects could have been forgiven if only the story was there, and it wasn’t. Consider the original myth, in which Perseus is angered by the gods because they put his true love, Andromeda, on the serving platter for the Kraken. Now that’s a battle that will involve an audience. What better, universal drive is there than love? And how often do you see an epic blockbuster where there isn’t a hero rescuing his lady in some form or another? This movie proceeds on the sole motivation of revenge, of which the stakes are hardly implanted. Here Perseus is made to fall for his cold, overseeing guardian angel of sorts, Io (Gemma Arterton), but that’s a development only tacked on in the end—as if the filmmakers said, Whoops! We forgot to include a love interest. Let’s have Perseus fall for Io, since it requires the least amount of reshoots. It’s a plot development that comes so late in the movie, and by that time it hardly matters.

Aside from its uninvolving plot, the production feels uninspired. Notice the pseudo-rock-meets-classical-epic score by Ramin Djawadi, in which impact blows on warrior shields are synchronized with notes in the music to cheesy effect. Why any of The Powers That Be making this movie thought rock-esque music fit with Greek mythological fantasy is beyond comprehension. The decision almost recalls the electronic metal score by Paul Haslinger that Universal scrapped for The Wolfman, except here the studio made the wrong choice and included it. Djawadi’s music does nothing to involve the viewer or support the movie, rather distract the audience with its incongruousness.

There are positive aspects of the production, namely everything that occurs on Mount Olympus. The art design of these scenes is wonderful, from their lens flare-laden visuals to their otherworldly atmosphere. This set looks like somewhere gods would be. Liam Neeson, clad in shimmery armor, plays Zeus, who is perhaps the only interesting character in the movie besides Hades, here played by Ralph Fiennes (in full Voldemort mode). Their scenes together carry more weight and tension than any of the silly battles contain, as it’s evident that these are actors who know how to act through their long wigs and bushy fake beards. On the flipside, however, Worthington is as stale as can be. He doesn’t bother trying to hide his Australian accent at all, and he’s seemingly incapable of showing any emotion beyond anger. Despite the success of Avatar (the credit for which belongs to James Cameron and not its star), after both Clash of the Titans and Terminator: Salvation this actor is at risk of becoming another bland “hunk” like Gerard Butler, destined to never give a genuine performance. If only Hollywood cared that bankable doesn’t mean talented.

Bankable also doesn’t necessarily indicate excellence, either. For how much money was spent on the production, they might’ve included at least the faintest plot or character development to engage us. The movie plays like a procession of unintelligible action scenes strung together by the thinnest narrative threads. Regardless, Clash of the Titans will no doubt make a lot of money opening on Easter weekend, when audiences will enjoy the catharsis of humanity rebelling against the gods, especially with all the church sex abuse scandals in the headlines as of late. And for audiences in the mood to blow some cash on mindlessly zoning-out to popcorn-munching action, this movie will probably serve them well. What it won’t do is linger in your memory after leaving the theater. For a Hollywood spectacle that should have wowed audiences with its grandiose exhibition, Clash of the Titans not only doesn’t live up to its expectations, it underwhelms to frustrating degrees of mediocrity.