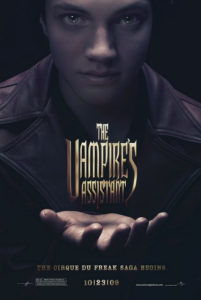 Cirque du Freak: The Vampire’s Assistant is the first installment of a proposed franchise, and it’s doubtful we’ll ever see any sequels. This teen horror gunk, adapted by Paul Weitz, who directed a jumbled product and wrote the script with Brian Helgeland (L.A. Confidential, Mystic River), contains almost no thrust. It never gets passed the prologue. The movie is so busy setting up what’s going to happen in the future sequels that it forgets to fill its runtime with a story. And after an underwhelming performance at the box office, chances are Universal Studios won’t bother forking over the dough for another go-round with graphic novelist Darren Shan’s popular material.

Hollywood is obsessed with creating lasting franchises right now, something comparable to Harry Potter. Audiences have seen a number of popular children’s and teen fantasy books turned into movies that never get passed the first chapter on film. Eragon, A Series of Unfortunate Events, and The Dark is Rising each began and ended what could have been long-running franchises, and so, because of poor reception or a major loss of budget, in these cases, the respective stories will remain incomplete on film. The most tragic of them was the extraordinary The Golden Compass, the first entry in Philip Pullman’s His Dark Materials saga; alongside his director-brother Chris Weitz, Paul produced that film and left moviegoers with an unquenchable ache when its failure all but capsized New Line Cinema. But no one will be aching when there’s no sequel for The Vampire’s Assistant, forcing those few interested to pick up all twelve volumes of the book series if they want to know what happens.

Here’s another movie where traditional vampire mythology, which is wildly popular thanks to the successful Twilight series, has the fangs ripped right out of it. Instead of vegetarian vamps that sparkle in the daylight, this movie’s vampires do not kill. They sedate their prey, drink a little, but leave them to go on with their lives none the wiser. The vampires can’t shape-shift, but they can move really fast in a computer-animated blur. And despite being immortal, they do age, just very slowly. “Vampires” are in a vague conflict with “Vampaneze,” a group of bloodsuckers who believe they should embrace their predatory nature and kill their human prey. Because Vampires are nice and refuse to kill, the Vampaneze want them dead.

Such a kindly vampire is Larten Crepsley (John C. Reilly), the magician in a five-hundred-year-old freak show traveling the world with bona fide freaks. When goodie-two-shoes teenager Darren (Chris Massoglia) and his best bad-boy friend Steve (Josh Hutcherson) attend the show, they find themselves in a confusing set of circumstances involving the two rival factions of the undead. Darren is on the side of Crepsley, and Steve falls to the side of hammy evildoer Mr. Tiny (Michael Cerveris), who talks of destiny entirely too much and wants a war between the vampire clans for unclear reasons. Both teens become vampires, or, um, half-vampires, and they battle it out in the end over Darren’s sweetheart, a monkey-tailed girl from the Cirque (Jessica Carlson). Are Darren and Steve, former best friends, fated to become mortal enemies? Probably. But the movie does such a lousy job of investing us in the characters that this conflict couldn’t be less interesting.

The main attraction, as it were, should’ve been the Cirque du Freak itself. It’s the title of the movie, after all. But we barely get to know its colorful characters, and the audience is left wanting more. Ken Watanabe plays the elongated show manager Mr. Tall; Salma Hayek plays the prognosticating bearded lady; Orlando Jones’ character has no internal organs; Jane Krakowski’s freak has limbs that regenerate when they’re removed; Frankie Faison is a man with two stomachs; Kristen Schaal has buck teeth that can bite through anything; Patrick Fugit is a snake-boy. These characters have about two or three lines each, enough to showcase their abilities and then forget them next to vampire antics. Indeed, meeting them takes the form of a freak show walkthrough—we get our eyeful and then move on to the next specimen.

It’s surprising that such noteworthy actors would appear in such abbreviated roles. Even Willem Dafoe makes a walk-on appearance as Crepsley’s vampire pal Gavner Purl, a shade tamer than his performance as Max Schreck in Shadow of the Vampire. The special effects that render the freaks’ malformations are shoddy CGI, so they’re more obviously computer creations than sideshow attractions. The Vampire’s Assistant is undone by a laundry list of problems that ultimately places it into the crapshoot of another coulda-been/shoulda-been franchise, one that performs so disappointingly on opening weekend (the movie opened in the #7 spot with $6.3 million in gross of a reported $70 million budget) that no studio executive in their right mind would sign off on a sequel. Then again, someone approved this script, so stranger things have happened.