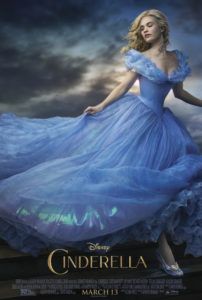 Disney’s latest trend of rethinking their animated films in live-action continues with Cinderella, a lavish but dull retelling that makes the studio’s listless adaptation of Stephen Sondheim’s Into the Woods look edgy by comparison. Thespian Kenneth Branagh directs another big-budget hunk of commercial cinema after his successful Thor and lesser-so Jack Ryan: Shadow Recruit, lending a few strokes of Shakespearian drama and courtly production design to the material. Although the result keeps relatively close to the fairy tale’s standard plotting and avoids another eye-rolling revisionist take like Maleficent, the storytelling is straightforward as can be, and further inflected by its legacy in Disney animated form. Ultimately, the House of Mouse puts too much cartoony influence into the emotionally irrelevant proceedings, and the outcome feels like a commercial bauble, pretty but disposable.

Screenwriter Chris Weitz (About A Boy, The Golden Compass) credits Charles Perrault’s story “Cendrillon” as his primary source of inspiration. Perrault’s text preceded the Brothers Grimm version by more than a century and originated the notions of a fairy godmother, animals becoming coachmen, and glass slippers. But there was nothing in Perrault’s storybook about a fat, squeak-speaking mouse named Gus-Gus or the phrase “bibbity bobbity boo”. For those inclusions, you’d have to go back to Disney’s animated Cinderella from 1950. Weitz and Branagh use their live-action effort as a kind of companion piece to the animated film, allowing viewers to enjoy both equally while spotting only a few minor differences between them. The problem is, Disney’s original version was just as dull as this live-action take. Most of the cartoon’s runtime was spent on talking mice who had more lines than its paper-thin Cinderella. Of Branagh’s film, at least the mice haven’t developed the power of speech. Well, sort of.

In a drawn-out epilogue that attempts to add gravitas to the orphaned Ella (Lily James) through tragedy, our heroine’s parents (Hayley Atwell and Ben Chaplin) pass away from unspecified diseases, but not before instilling the notion that Ella sees the world differently, as it could be, by being kind and courageous. As a young woman, Ella is left to her wicked stepmother, Lady Tremaine (Cate Blanchett), and her unbearable daughters Anastasia (Holliday Grainger) and Drizella (Sophie McShera), who spot the soot on Ella’s face and rename her “Cinder-Ella”. She makes no argument, adopting the name, her newly assigned chores, and her new quarters in the attic with grace. After all, she is kept company by a group of mice, who she talks to and feeds with the scraps from her plate. (There’s something a little crazy about a person who lives in their attic and speaks to vermin, especially when the vermin do not speak back. At least the toon version justified Cinderella’s behavior with talking mice. These mice squeak in barely audible non-words.)

Unlike other versions, this film’s Cinderella doesn’t dream that a prince will sweep her away from servitude; instead, the film’s most inspired innovation roots the central relationship in love. During a ride in the woods, Cinderella meets the handsome and charming Kit (Richard Madden), and they fall for one another. But unbeknownst to Cinderella, Kit is the Prince. Derek Jacobi plays the King, who, upon hearing his son has fallen for a farm girl, cannot decide if he wants his son to marry for love or the kingdom’s advantage. Their father-son relationship is among the most interesting pairings in the film. Meanwhile, the Grand Duke (Stellan Skarsgård) schemes to arrange Kit’s marriage to another princess. Kit’s choice becomes clear when Cinderella arrives at the public palace ball decked out in an impossibly beautiful gown, which of course, will disappear at the final chime of midnight. When the chimes begin, she bolts, leaving a glass slipper behind, and… well, you know the rest.

For the most part, Cinderella adheres to the conventional plot structure, and Branagh distracts from the story’s flatness with the kind of superficial enchantments a reported $95 million budget can provide. But even these fail to impress. Take the sequence where Cinderella receives her magical gown, pumpkin carriage, and animal servants—it’s one of the film’s least impressive. Helena Bonham Carter, appearing from behind a pair of choppers that look like leftover dentures from The Mask, plays Cinderella’s bumbling Fairy Godmother. She may not burst into song (the film is a non-musical), but she does say “bibbity bobbity boo” more than once. When she turns a goose into a driver and lizards into coachmen, the resultant monstrosities look like abandoned concepts from The Island of Dr. Moreau. At the end of the sequence, Cinderella swishes back and forth in her glittery blue dress, which at first is rendered using CGI, and the cheap-looking effect is better suited for a Barbie doll commercial.

With this in mind, Branagh’s focus on making a storybook come to life almost does the film a disservice, if only because Disney no doubt insists on elaborate CGI for such magical moments. In the tangible realm, costumer Sandy Powell and production designer Dante Ferretti load this production with gorgeous costumes and elaborate sets. And yes, it’s easy to get swept up in the majesty of their designs. Moreover, Branagh’s cinematographer Haris Zambarloukos shoots on celluloid instead of digital, giving the characters and backdrops a tangible, grainy feel that seems more appropriate for a live-action, real-world version. But this isn’t the real world; this is Disney. Counteracting the realness are the computer-animated animals and other hokum that look artificial, and quite terrible, when placed inside Zambarloukos’ beautifully shot compositions. For example, there’s a scene where Cinderella walks home in the rain, carrying her glass slipper with mice inside. The damp and textured scene looks baroque, except for CGI mice that seem to glow on the screen and spoil an otherwise magnificent visual moment.

There are times in Cinderella when the viewer is reminded of Branagh’s massive 70mm rendering of Hamlet in 1996, and we yearn for the tangibility of that production. Blending CGI and film stock in Cinderella makes for an ungainly fusion; however, the alternative was that Branagh shoot everything on digital to accommodate the animated figures onscreen. But that would have given the entire film a synthetic look, like Maleficent had. This critic would like to believe that, if Branagh had his way, he would have axed the CGI creatures and made a real-world fairy tale shot on film. Alas, the finished product feels like two worlds collided in all the wrong ways, and the actors often try to compensate for their highly ornamented surroundings by overacting (Blanchett, Bonham Carter, Grainger, and McShera are the worst offenders). Though, James and Madden have evident chemistry, which helps. Still, there are moments of CGI animal nonsense that seem to exist completely separate from the live-action beauty Branagh has created, and that awkward juxtaposition leaves the entire film feeling uneven, at times admirable, and at others condemnable.