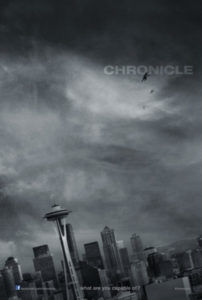 It takes a careful use of technique and plotting to balance the number of genre formulas present in Chronicle, but it takes considerable talent to convert them into such an uncommonly entertaining and satisfying experience. Directed by first-time helmer Josh Trank and written by Max Landis (son of John Landis), the film tells a superhero origin story and imbues plenty of high school teen drama along the way, but uses a “found footage” approach to the proceedings. In a time when each of these modes on their own has been overexposed, here’s a film that combines them in ways both exciting and, at times, even elegant. Indeed, this may be the only entry in the “found footage” subgenre that finds unique ways to employ flowing camerawork and a conclusion that doesn’t end with everyone dead.

The film opens when shy teen Andrew (Dane DeHaan) decides to further his social outcast status by recording his experiences with an old video camera, and in doing so escapes by placing a video boundary between his life and the real world. We see Andrew bullied at school only to return home to a dying mother (Bo Petersen) and abusive, drunkard father (Michael Kelly). No wonder Andrew wants to escape. His only friend is his cousin, Matt (Alex Russell), who at first pities Andrew and wants him to join in at school parties. Andrew begrudgingly attends and, along with Matt’s friend, class president Steve (Michael B. Jordan), the three boys find a strange hole in the ground, completely circular and leading down into a cavern. They enter and find a glowing, crystal-looking something-or-other of unknown origin; all at once, there are strange lights and shouting, and the camera goes out. When the image returns, the protagonists have already discovered that their underground encounter has imbued them with strange telekinetic powers, the ability to manipulate objects with the mind.

Matt has bought Andrew a new camera, and they record how Andrew’s abilities are the most developed, perhaps because he’s the most introverted of the three. We see them having fun with their new gifts, playing harmless tricks such as using their mind to start a leaf blower and puff up a cheerleader’s skirt. But as their abilities grow, they find the need to set ground rules, such as not using their power to do harm. Before long, they learn to fly and protect themselves from danger by creating a kind of mental force field (useful in drunken dad attacks). Andrew uses his ability in a school talent show to earn a mere moment of acceptance. But their fun-loving antics don’t last long; soon Andrew is thrust further into humiliation. His troubled state enhances his feeling that he’s an outsider, and his powers give him more reason to feel different, but now dangerously superior to the cruel world that has ostracized him. This builds to a final battle of misguided ideology and sheer power reminiscent of the confrontation between Professor X and Magneto in X-Men: First Class.

Along the way, Trank finds clever ways of taking the camera out of Andrew’s hand to make the film more than your usual first-person “found footage” experience. With his power, Andrew finds he’s able to concentrate on floating the camera around him and his friends as they experiment with their abilities; the effect takes the look of dolly and Steadicam shots. Other scenes show Andrew in his bedroom, directing the hovering camera around himself, an act of self-inflicted voyeurism that has all sorts of interesting psychoanalytic consequences for the character (Peeping Tom came to mind). However, the film’s majority is from the first-person perspective, yet the camera alternates between friends so each of them has ample screentime, their roles built into more than just one-dimensional teens through surprising storytelling economy. Moreover, the actors in these roles may not be familiar faces, but they’re each experienced performers, whereas typical “found footage” movies hope to dupe the audience into believing the footage is real by hiring talentless unknowns.

Most satisfyingly, Trank and Landis find a natural ending for their story. Where “found footage” titles like The Blair Witch Project or Paranormal Activity typically end with the camera abruptly shutting down, we’re privy to a natural ending in Chronicle. For a longtime enemy of the subgenre because they never come to a dramatic close, the filmmaker’s demand for a fleshed-out conclusion comes as a relief for this critic. But not every aspect of the production is polished. There’s some iffy CGI used to render flying-through-the-sky scenes and elevated objects. Likewise, many of the teen relationships feel underdeveloped, such as the one between Matt and a video-blogger heartthrob that goes nowhere. But these are minor concerns since the story has done such a fine job of involving us. Although it doesn’t implement any new tactics within its superhero or teen storylines, Chronicle should be the shining example for any filmmaker or studio wanting to make a “found footage” movie that’s more than just a gimmick.