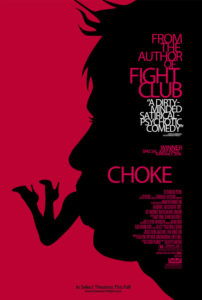 The underappreciated Sam Rockwell, from Confessions of a Dangerous Mind and Snow Angels, carries the film as Victor, a sex-addict using orgasms as a method to escape his problems. In the moment of climax, suddenly all his thoughts disappear, and for that moment he’s free. Victor is a foul-mouthed, narcissistic, coarse fellow who spends every waking moment spewing vile sexual remarks and making unreserved advances on any and every female he comes in contact with. Attending Sex Addicts Anonymous meetings, he wants to get better, sort of, but dirty sex is an easier solution than self-help. And Victor needs a lot of help.

A Colonial Reinactor by day, by night Victor and his chronic-masturbator friend Denny (Brad William Henke) select restaurants wherein he forces food down his throat, inducing an esophageal block. As Victor turns purple and the veins in his face begin to protrude, a Good Samaritan always comes to the rescue, pumps the Heimlich and saves the day. Why would anyone intentionally choke themselves, you might ask? Because the Samaritan, consumed by their perceived good deed, occasionally sends sympathy money. Thus concludes the con.

Victor also does this because he’s desperate to place his life in someone else’s hands. You see, on top of his overactive libido and emotional disconnection, Victor has abandonment issues. Angelica Huston gives a wonderful supporting performance as Victor’s dying mother, looked after by Dr. Paige (Kelly MacDonald). Victor simultaneously wants her to live and die, attempting alternative methods of healing with the good doctor, meanwhile recollecting childhood events that made him the perverted and self-destructive man he is today.

First-timer Clark Gregg, background actor in several David Mamet pictures, directed and adapted Palahniuk’s novel for the screen. His production was independent to be sure, but even the lowest of low-budget films avoid the types of mistakes Gregg makes throughout the picture. Keep an eye on the top center of the frame; from time to time you’ll notice a boom-mic creeping down, unsteadily shaking in and out of the shot. I wish I was kidding. Aren’t we passed the point where such mistakes, normally reserved for live television and soap operas, make their way into feature films? Can’t this type of error be fixed in post-production with some computer-imaging patch-ups? Between this and the silly white swoosh indicating the several flashback transitions, Gregg has a lot to learn. I only wish his experience was learned before this film was released.

Even when Gregg has control over the frame the result doesn’t inspire. Considering the blatant similarities to Palahniuk’s Fight Club (self-help groups, a woman “ruining” everything, a twist ending), what should be a ruthless edge feels tempered in the third act when the film turns into a typical search for self-discovery, complete with happy ending (no, not that kind). Dare I say, it’s even kind of sweet? Victor finds himself no longer able to copulate with random women, realizing he’s in love with Dr. Paige. The rather sappy conclusion leaves us feeling cheery and satisfied in that Hollywood rom-com way, something I never thought I’d feel from a story by Chuck Palahniuk. Maneuvering such a turn of character is, given the film’s subject, an impressive feat worth noting, but the outcome seems unnatural.