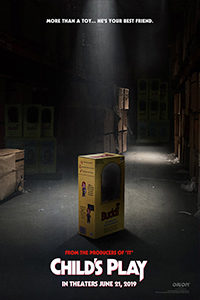 Child’s Play, a remake of the 1988 slasher about a murderous red-haired doll named Chucky, borders on having something relevant to say. It’s a horror movie for the digital age of smart homes connected to devices that respond to voice commands. Kaslan, the movie’s omnipresent tech company, has just released their “Buddi” doll, a stand-in for the Google Home Mini or Amazon Echo Dot; except, instead of a faceless device that listens to every word you’re saying and occasionally chimes-in when it wasn’t asked to, the Buddi interacts and learns. He’s your child’s best friend, yet he also can order you a Kaslan self-driving car or control your Kaslan thermostat, all with a simple WiFi connection. The movie questions what happens when a learning artificial intelligence whose safety protocols have been disengaged interacts with the erratic and destructive behavior of today’s overstimulated teenager. Part cautionary tale about technological integration, part commentary on the destructiveness of youth culture, Child’s Play does neither very well, but it’s a worthwhile horror movie.

The original remarked on the absurd paranoia of the Satanic Panic, as well as the consumer frenzy over the hottest new toy. During the 1980s, politicians and the media propelled the rampant delusion that demonic themes in otherwise innocent children’s entertainment, from Care Bears t0 Dungeons & Dragons, would corrupt children, making them easy prey for your neighborhood’s resident Satanists, who were obviously bent on using your child in their blood rituals. Meanwhile, suburban moms trampled over each other in department stores to get their hands on the newest toy fad, such as My Buddy or Cabbage Patch dolls. Child’s Play creator Don Mancini and director Tom Holland exploited these ideas with the character Charles Lee Ray, Brad Dourif’s sadistic killer and occultist, who transfers his body into a talking “Good Guys” doll, scares the bejesus out of a family, and then tries to possess a young boy.

The new movie arrives with some dissension among horror fans, since the original, increasingly over-the-top series had its sixth sequel debut as recently as 2017. Due to some strange legal loophole, Orion Pictures was able to release the new movie, while Universal Pictures still maintains the rights to the ongoing series featuring stars Dourif and Jennifer Tilly. Regardless, Norwegian director Lars Klevberg, who made the yet-unreleased Weinstein Company holdover Polaroid, and screenwriter Tyler Burton Smith rethink the material to put a safe distance between their movie and the superior 1988 version. The result feels like the filmmakers made a horror movie out of Steven Spielberg’s A.I. Artificial Intelligence (2001) or maybe they were inspired by Charlie Brooker’s Black Mirror—the phenomenal sci-fi anthology series that went from the British station Channel 4 to Netflix, which explores all manner of technologies gone haywire.

In a rather ho-hum backstory, Child’s Play opens in a Vietnamese sweatshop, where, just before killing himself, a disgruntled worker on the Buddi assembly line decides to remove the safety programs from a doll’s software. It’s an act that turns the otherwise pleasant doll, imbued with the voice of Mark Hamill, into a misunderstood and dangerous stalker. After all, Buddi’s basic programming demands that he imprint on his owner to become their best friend forever—making him a weird combination of HAL 9000, a My Buddy doll, and a garden-variety stalker. Single mother Karen (Aubrey Plaza) gifts the mal-programmed Buddi doll, named Chucky, to her 13-year-old Andy (Gabriel Bateman) as an early birthday present. Andy is too old for dolls, but he makes use of its AI functions. Thanks to the suicidal factory worker, Chucky, programmed to absorb and process information, has the added ability to swear and misbehave, leading to some funny moments when others teach him naughty words and behavior.

At first, the lingering, creepy doll records conversations and misinterprets passing remarks to unsettling effect, but soon Chucky’s desperate personality develops an obsessive complex and violent outbursts. When Chucky watches The Texas Chainsaw Massacre 2 (1986) with some teenage boys, who laugh hysterically as Leatherface removes the skin from a victim’s face, the doll reasons that grisly violence will bring his new friends joy (uh oh). Chucky’s behavior becomes increasingly desperate for approval, and then gory, giving way to several nasty—but not necessarily scary—moments of bloody violence involving power tools. We almost root for Chucky as he takes out Karen’s shitty boyfriend, Shane (David Lewis), while other deaths aren’t so morbidly cathartic. Enter Det. Mike (Brian Tyree Henry), whose mother lives in Andy’s apartment building, and who begins to suspect that Andy may be responsible for Chucky’s killings. It all culminates in an outlandish finale, where Chucky taps into the Kaslan network to take control of various Kaslan products for murderous ends.

Despite the absence of voodoo curses and Dourif’s scary-comic performance, the new Child’s Play proves entertaining enough, though it never tests the audience or uses its self-conscious commentary to substantive effect. As they are, the film’s remarks about technology and bad teenage behavior have a way of drowning in the gushing blood from a table saw death or the obligatory dead pet. Elsewhere, Hamill’s voicework is less about creating a distinct personality than lending a certain unnerving, childlike quality to the doll that twists every line into something sinister—a quality enhanced by Chucky’s red, glowing eyes that are supposed to be blue. But for all its clever innovations and alterations to the original, the remake has decidedly less personality. Still, as contemporary horror goes, the movie has more on its mind than your average paranormal offering from Blumhouse, making Child’s Play a welcome change of pace.