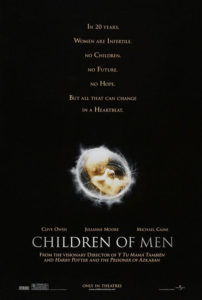 Children of Men takes its deserved place on a short-but-vital list of masterful science fiction films. Like Brazil, Minority Report, and Blade Runner before it, Mexican director Alfonso Cuarón’s film creates an entirely convincing future down to every last detail, filming a picture that works both as political statement and thriller. Set in 2027, in England, when the film begins 18 years have passed since a child was born. The population is decreasing. The human race is slowly dying. There is panic and social uprising everywhere. The British government, a strong military presence in both cities and rural areas, heavily restricts travel in and out of the country. Freedom is diminished to whimper. People are given an often-taken option to self-terminate. Hope is useless. And then suddenly, a miracle arrives within the underground. A woman refugee ironically named Kee is pregnant, but her pregnancy is kept secret by those who know. Whatever government, political institution, or social organization possesses the baby can use the child as a tool to generate hope or further incite despair.

Clive Owen is Theo, a former political activist who, like the rest of the world, has all but given up. His former wife (Julianne Moore), now in the underground, contacts Theo and informs him of Kee’s miracle pregnancy, and asks him to get Kee out of the country. The only way to save Kee and her baby is to get them to “The Human Project”, an elusive and only rumored-of organization allegedly made up of the world’s top minds; the project is said to aim for the preservation of the human race. Theo is frank, honest, resourceful, and pessimistic (which in this film’s world means he’s realistic), so he’s the perfect character to guide Kee through the chaotic landscape.

Similar to Terry Gilliam’s masterpiece Brazil, Children of Men is a world where the government is unjust, where the heroes befriend rebels (who are labeled “terrorists”), and where humanist ideals are no longer applicable. In many ways, depending on your views, our world is not so different. Parts of today’s environment greatly resemble the helter-skelter tone of Children of Men, which makes the film’s timeliness all the scarier. Though Cuarón’s film is science-fiction, it’s also about contemporary rebellion, political ferment, and ultimately about hope. The narrative chronicles a future anticipating turmoil, not unlike present-day worldwide strife. While its future is thirty years out, little feels improbable; none of the technology or political conditions appear unrealistic or as distant science fiction. Unlike many sci-fi films, Children of Men’s setting wasn’t created through an obvious use of elaborate computer-generated images. This isn’t Star Wars.

Several of the ruinous, battle-torn towns depicted resemble those now on CNN. The film turns England into a place relative to modern-day Iraq, or certain war-torn sections of Africa. Cuarón guides his audience through this anarchic landscape via long, unbroken, elaborately-filmed shots. I couldn’t help but be reminded of Stanley Kubrick’s Paths of Glory; the war scenes in that film are easily analogous to the baby rescue scene in Children of Men. In both, an extended, continuous shot follows a single man through wartime chaos. Cuarón captures the symptoms of an uprising—explosions, gunfire, and death are all around, while we follow Theo through crumbling remains of a city. Blood splatters on the camera’s lens and remains there for several minutes, subtly reminding the audience just how long this impressive take is lasting.

Kudos to cinematographer Emmanuel Lubezki, the director of photography behind such picturesque films as Sleepy Hollow and The New World; his work here is bold but not flashy, and artistically innovative without pretension. Unlike, say, a film by Brian De Palma, the extended takes do not appear labored over and planned to precision. Instead, they emerge out of the situation and flow naturally within the context of the story. The events in Children of Men occur randomly—characters are abruptly killed; new conflicts unexpectedly arise—and Lubezki realizes that breaking up such scenes shows the audience those developments were polished. But Children of Men does not tell the story of a polished world. It aims to make form and narrative analogous, so the film’s camerawork effectively reflects the story it depicts.

The only element preventing me from labeling the directing as the film’s star is Clive Owen’s significant onscreen presence. Owen has had a streak of supporting roles in great films (such as 2006’s Inside Man and 2005’s Sin City), but this is his first great work as a lead role. A door hinges on the character Theo, and thanks to Owen, it swings soundlessly. Owen gives Theo the appropriate characteristics of a distraught-but-vigilant protagonist, a hero without a heroic persona. Theo remains a reluctant hero, and like most reluctant heroes, his authenticity is more aptly vindicated than one who strives for heroism. Owen’s superb performance contains all the necessary sympathetic features to breathe the needed restrained emotionalism into Theo. I hope to see more work of this caliber from Owen in the future.

Cuarón’s film entertains just as it speaks volumes on the horrors and delicacy of life. The screenplay was based on the book by P.D. James, a book that I haven’t read. Though according to several critics, this is one of the few cases where the film is better than the material on which it was based. Frankly, I don’t see how words can describe what Children of Men shows us, at least, not with the power of the visual paragraphs illustrated by Cuarón’s camera. This is a great film, both engaging and intelligent, and is one of the best of 2006.