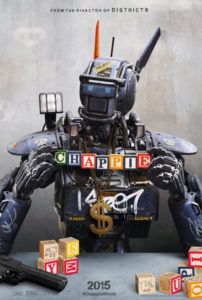 Without the brains of Isaac Asimov’s robot tales or the soul of Steven Spielberg’s A.I. Artificial Itelligence (2001), Neill Blomkamp’s third film CHAPPiE delves into familiar sci-fi action fare. The South African director teams with his wife and co-writer Terri Tatchell to produce a frenetic hodgepodge of computer science, robo-battles, and gansta crime. The frenzied result contains a number of interesting ideas, but they assemble into a messy, superficial manner that remains devoid of any genuine dramatic pull. After his outstanding debut District 9 (2009), Blomkamp has thus far consistently failed to live up to his potential as a filmmaker and storyteller, driving his subsequent films with designs and concepts more than solid storytelling. Take his second effort, Elysium (2013); it was a great-looking film, but in retrospect, I was far too kind in my original review—the film had more style than substance and got by on its visceral momentum alone. Now on his third feature, Blomkamp leaves us questioning whether he’s a one-hit-wonder.

Sometime in the near future, Blomkamp’s hometown of Johannesburg becomes a warzone of urban crime, not unlike Detroit in RoboCop (1987). And much like that film, a robotics company decides to respond. Enter Tetravaal and its CEO, Michelle Bradley (Sigourney Weaver), who have reduced crime rates with their robot cop Scout program, developed by peppy engineer Deon (Dev Patel). Deon admits he’s less interested in police drones than exploring the limits of artificial intelligence. And after 900-plus days trying to engineer a true a.i., Deon stays up one night drinking Red Bull (product placement!) and cracks the code. His first instinct is to rush into his money-minded CEO’s office and pitch his notion of an artistic-minded a.i., which she of course denies (Deon is an engineer, not a salesman). So he resolves to test his a.i. on a downed police bot, which he steals. But before he has a chance to experiment, he’s hijacked by a trio of hoods: Die Antwoord rappers Ninja and Yo-Landi (playing themselves?), and their fellow hoodlum Amerika (Jose Pablo Cantillo).

These ganstas need millions to pay off a psychotic ganglord, and they need Deon to show them how to stop the Scout bots so they can carry out a heist. Deon lies and says he will show them how to train their very own robot instead. He puts his a.i. program into the stolen bot and voila, Chappie is born into the world like a baby. Deon’s program requires Chappie to learn and develop his own personality. Sharlto Copley (in his third collaboration with Blomkamp) plays Chappie, lending his voice and physical performance via motion-capture technology, while adopting the walk and talk of Ninja and the sensitivity of Yo-Landi. (NOTE: When they’re not entertaining (or offending) millions in the energetic music videos for “Pitbull Terrier” and “Fatty Boom Boom” as Die Antwoord, Ninja and Yo-Landi apparently have their own t-shirt company. Ninja’s costumes consist of Die Antwoord promotional gear, and before long, the bleach-blonde Yo-Landi appears with a “Chappie” shirt. Their clothes are at once funny and distracting. Casting these two probably seemed like an amusing idea at the time, but their delivery is downright grating. They’re best consumed in small, music-video-sized doses.)

Anyway, Chappie’s new parents kick the robot’s “maker” Deon out of their concrete hideout and try to raise Chappie themselves, teaching the ‘droid how to brandish guns, curse like a real gangsta, and read a children’s book about a black sheep. You might wonder why Deon allows these punks to keep Chappie for themselves and doesn’t report them, but you’ll have to keep wondering, because the screenplay never satisfactorily addresses the issue. The story spends more time setting up a 5-day timeline in which Chappie’s irreplaceable battery will run out. This requires Chappie’s self-preservation instincts to take effect during the predictable finale. Meanwhile, competitive Tetravaal engineer Vincent (Hugh Jackman) wants Deon’s Scout bot program canceled in favor of his own design, called The Moose, a human-controlled tank on two legs (think ED-209 and the Spruce Moose). Leading to the video game-style final battle, the gangstas convince Chappie to commit crimes, Deon tries to save Chappie’s soul, and Vincent arms his Moose to blow Chappie to smithereens.

As for the titular character, Chappie has no purpose of his own, except for survival. He begins as a cipher onto which the other characters project their needs. For Deon, Chappie is the answer to his life’s quest to create a conscious artificial intelligence. For Ninja, he’s a means of executing a not-so-elaborate heist. For Yo-Landi, he’s the makeshift child she never knew she wanted. And for the God-fearing Vincent, Chappie is the embodiment of everything he hates, both a life not created by God and a pseudo-personification of his failure as a robot designer. None of these motivations have any resonance. And Chappie himself has little meaning for the audience, aside from pulling these characters this way and that. Chappie’s personality is never unique or independently formed; rather, it’s clearly a reflection, if not blatant imitation of his “mommy” and “daddy” and “maker”. However sharp the CGI and superior Copley’s mo-cap performance may be, tender moments where Chappie pets a dog or Yo-Landi reads him a bedtime story fail to create a sympathetic, three-dimensional character. CHAPPiE concerns itself more with its overcrowded cast of human characters and its bloody, robo-heavy battle scenes.

Blomkamp’s reliance on his influences leaves CHAPPiE feeling like he raided the scrap heap for parts. From the aforementioned RoboCop, he borrows the notion of rampant urban crime that incites a corporation to offer two opposing robotic police officers—one a clunky heavy-gunner, the other a sleek and smarter option—which inevitably duke it out in the finale. From Short Circuit (1986) comes the notion of an Indian robotics designer obsessed with the idea of artificial intelligence. Chappie himself seems like the lovechild of Short Circuit‘s Johnny-5 and the bot from WALL•E, except that he’s an annoying chatterbox who, despite learning all the secrets of the internet, never learns to stop referring to himself in the third person. Blomkamp also mines his short film oeuvre for material, borrowing heavily from Tetra Vaal (2004), Tempbot (2006), and Adicolor Yellow (2006). (But then District 9 was developed from his short Alive in Joburg (2006), so he can hardly be faulted for stealing from himself.)

Some crowds might apologize for CHAPPiE in the same way many did for Elysium. After all, Trent Opaloch’s energetic handheld camerawork races with clarity, allowing the audience to lose themselves in the film’s diverting kinetic action (even if editing duo Julian Clarke and Mark Goldblatt deliver some unsound shot-for-shot logic). Watching Weaver and Jackman in yet another sci-fi scenario has its appeal as well. But Blomkamp and Tatchell fail to give their chaotic proceedings any greater purpose, and not for lack of trying. More than once, Chappie remarks about human cruelty, shouting “Why do you humans do this?!” It’s an attempt at substance that amounts to a Cliff’s Notes version of social commentary, but the film never develops its meaning to any satisfying end—and certainly doesn’t compare to the heightened political commentary present in District 9. Sadly, Blomkamp’s film contains a concept ripe with possibility, but instead of realizing its full potential, he loses himself in machines and mayhem.