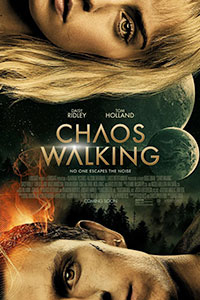 Chaos Walking has a promising setup. In the year 2257, the all-male inhabitants of a colonized planet called New World live with “Noise,” a cloudlike aura that projects their inner thoughts audibly and sometimes visually around their heads. With their feelings on display, the inhabitants live a relatively straightforward life. Women, we are told, have been wiped out in a war with the native population, a telepathic species called Spackle. The remaining human civilization resembles a Wild West settlement in the Pacific Northwest, complete with wooden buildings, horses, and hostile pioneers. When a sole woman, Viola (Daisy Ridley), crashlands on the planet, our young hero Todd (Tom Holland) learns that women do not have Noise. What’s more, Viola’s presence reveals secrets about his settlement and the planet’s past. Based on Patrick Ness’ popular YA book The Knife of Never Letting Go, the movie’s themes include questioning gender roles, colonial violence, religious zealotry, and patriarchal agendas. Despite such rich potential under the surface, however, the movie’s bland characters don’t have much on their mind.

That becomes blatantly evident early on when Todd’s Noise amounts to little more than one-dimensional observations about his surroundings. When he first encounters the blonde bobbed Viola, she hears his basic thoughts. His disembodied voice utters “Yellow hair” and “Spacegirl” and “Be a man.” Is this everything on his mind? If so, he exposes himself as a dullard. Occasionally the Noise betrays Todd in more entertaining ways, such as when he fantasizes about kissing Viola. Because the feeling is so strong, the cloud around Todd’s head turns into an externalized mental image that Viola sees. Ness, who contributed to the script, creates a metaphor for the generalization that women have a more internal locus of control, while some men, failing to understand that, express hostility toward women. In Todd’s village, called Prentisstown, named after the grizzled mayor David Prentiss (Mads Mikkelsen), the entire community mistrusts anyone whose thoughts aren’t exposed. Viola’s arrival is seen as a threat.

And so, Todd helps Viola escape to another part of the planet on a cross-country trip, accompanied by his loyal border terrier, Manchee. Prentiss and his clan pursue, the most fervent of them being the resident preacher, Aaron (David Oyelowo), whose Noise takes the form of fire and brimstone. Aaron believes women have no souls because their Noise isn’t visible. But the truth about Prentiss and Aaron’s ideology becomes clearer when Todd and Viola actually encounter a Spackle and the other humans on their ringed planet. Prentiss and Aaron have used fearmongering to take control and hide their past crimes that range from genocide to a massive attack on women. Given the story elements here, you would hope that Viola rises up to become a strong, distinct character whose presence is burned on the memory. Alas, she’s a relatively blank slate, stuck in survival mode and distracted by Todd’s mental ramblings. Once he learns her name, his Noise babbles “Voila” over and over.

Of course, in typical YA format, most of these conflicts remain open-ended (although be warned, the dog meets a grim end in a moment of predictable emotional manipulation) in service of a sequel that will never happen—in part because Chaos Walking bombed at the theater, and in part because the movie proves the concept of Noise doesn’t play well onscreen. There’s nothing so uninteresting as hearing and seeing the CGI thoughts of characters who don’t have any depth. And even without Noise, their thoughts would be obvious. Prentiss remains an exception, as he can control his emotions enough to use his Noise to create convincing illusions—a handy trick in a battle. Doubtless, Todd would eventually learn to control his Noise with similar skill, leading to a final showdown between Todd and Prentiss in the third installment. Fortunately, we will be spared from having to see it.

The movie’s protracted journey to the screen might overshadow the banal outcome or at least threaten to tarnish its reputation with audiences. Chaos Walking has been in development since Lionsgate picked up the rights in 2011, during the height of Hollywood’s now-dissipated Young Adult fiction craze. The distributors of the Twilight, Hunger Games, and aborted Divergent franchises have spent millions on several script revisions (including one by Charlie Kaufman), multiple directors, and reshoots (by Fede Álvarez) owing to scheduling conflicts. The production went before cameras under Doug Liman’s helm and completed principal photography in 2017. But the studio, unhappy with Liman’s initial cut, demanded rewrites and additional footage, which could not be completed due to the in-demand cast and crew. When Chaos Walking finally opened four years later, in 2021, it was during COVID-19’s devastating impact on theatrical distribution. But even under normal conditions, Chaos Walking would have felt like the heyday for this material was several years ago.

Liman is a talented director, to be sure. And his experience on sci-fi productions (like the superb Edge of Tomorrow) lends Chaos Walking a certain amount of potential. The cast is a handsome group of talented performers, but none of them have much to do, which is a particular shame for Holland, Ridley, and Mikkelson. The fault lies with a concept that seems ill-suited for cinema and the script’s failure to create compelling characters who, by definition, carry everything on the surface. Despite the rocky production history, the screen story looks and feels relatively cohesive. But like most YA movies, it contains bland dialogue, superficial characterizations, unremarkable visuals, and overly familiar plotting. All of this is a disappointment given the rich potential of Ness’ basic setup to comment on the viewer’s world with the one he created. If the movie accomplishes anything, it implants some curiosity about the book for those of us who haven’t read it.