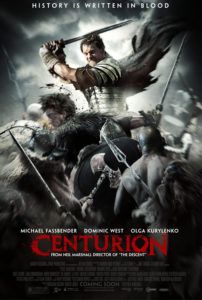 By the early second century of the current era, the Roman Empire spans from the Black Sea and covers most of Europe, save for a considerable stretch of land known as Britain. The indigenous peoples in Scotland ward off the invading armies of Rome using guerilla tactics, which the orderly Roman army finds difficult to combat being accustomed to head-on skirmishes. Meanwhile, The Ninth Legion, comprised of thousands of Roman soldiers, disappears without a trace. Some historians claim the Legion disbanded, while others claim they were slaughtered by the wild tribes of Germania. Theories surrounding one of history’s great mysteries are in no short supply. Centurion is one of those theories, presented in an action movie format to answer the historical questions with bloody violence.

Of course, being an action movie, historical relevance is not a priority. The result is merely a fill-in-the-blanks scenario from the mind of British writer-director Neil Marshall, who took the intriguing mystery of The Ninth Legion and concocted an absurd story around their demise. Marshall, as you may recall, directed the entertaining werewolf yarn Dog Soldiers and the smart cave-monster movie The Descent, and with those films, he showed some promise as a burgeoning horror filmmaker. Then he released Doomsday, a mishmash of a zombie horror, post-apocalyptic dystopian sci-fi, and Medieval swordplay epic, all presented with the airs of a John Carpenter film. It remains one of the most derivative movies this critic has ever seen. Centurion falls somewhere between being inventive and utter garbage, as Marshall takes a fascinating idea and reduces it to a mindless display of bloodthirsty action and overt masculinity.

The story follows Centurion Quintus Dias (Michael Fassbender), the son of a freed gladiator whose expertise in battle knows no bounds. Quintus becomes the sole survivor of a raid on his frontier fort by a savage band of Picts, the local tribe bent on keeping the Roman forces off their terrain. Quintus barely escapes alive and eventually finds his way into the legion of General Titus Flavius Virilus (Dominic West), which is then ambushed, leaving only a few survivors to rescue their leader. Quintus leads the remaining men into a Pict camp, where the botched rescue attempt of their General leads to the death of the Pict king’s son. Swearing vengeance, the Pict King Gorlacon (Ulrich Thomsen), accompanied by his “she-wolf” tracker and assassin Etain (Olga Kurylenko), hunt down Quintus and his men who struggle to survive.

Marshall has a nasty habit of lifting from his inspirational sources in ways that prove distractingly obvious. Just as Doomsday was a blatant rip-off of Carpenter’s style and story elements, Centurion pays a copycat’s homage to Ridley Scott, complete with blue-hued cinematography by Sam McCurdy and fuzzy flurries lending the picturesque scenery a dreamy atmosphere. The only thing Marshall forgot was to shoot Quintus walking through a field, running his hands over reeds of wheat. In manner and plot, the movie recalls 300, with a small number of “heroes” pinned behind enemy lines, outnumbered and facing a powerful enemy. What’s more, these manly soldiers, dominated by their own machismo, never cease being male elitists.

As a result, the infrequent women characters are demonized as villains, grossly distrusted by men, deemed whores or meant for the kitchen. And why not? Marshall’s audience has always been the male-driven fanboy crowd, often more interested in gory effects than story. But it’s not merely that Marshall depicts women through objectified types that proves problematic, it’s that he attempts to align our sympathies with Romans and represents Etain as a monstrous villain. Etain’s backstory is that when her village was plundered by the Romans when she was young, she witnessed her father butchered and her mother raped and killed; then, the Romans raped her and cut out her tongue so she could never tell. But then, curiously, Marshall expects his audiences to sympathize with Romans who pillage and plunder, slaughtering innocents but only after raping them. Wouldn’t our sympathies find a better home with Etain in her quest for revenge, as opposed to the rapists who destroyed her world?

The other major problem with Centurion, beyond its blatant chauvinism, is that Marshall doesn’t know his budgetary limits and the experience suffers for it. Instead of using his meager budget with a clever sense of minimalism, like he did with The Descent, Marshall overstretches his funds in an attempt to make what, with more money, could’ve been a massive epic. You need not look beyond the title sequence, comprised of shoddy computer-generated stone lettering, before realizing Marshall’s aspirations reach beyond his resources. This is followed by underwhelming and cheaply designed sets, cartoonish CGI blood effects, and corny dialogue. Marshall’s production sometimes feels like a watchable made-for-TV movie, but it hardly satisfies as a feature film.

This is unfortunate, because Marshall explores an interesting historical question with the disappearance of The Ninth Legion; he even makes a (paper thin) political metaphor with the Romans serving as Americans and the Scottish representing Iraqis. But it’s difficult to take the film’s politics seriously when they’re so marred by the shoddy production. Marshall’s best resource, however, is his very talented cast. Fassbender (from Fish Tank, Hunger, and Inglourious Basterds) is one of Britain’s biggest up-and-comers in Hollywood, and he’s supported by West (from 300) and Kurylenko (from Quantum of Solace), David Morrissey (Red Riding Trilogy), and Liam Cunningham (The Escapist). Nevertheless, this cast is given little to do outside the standard swordplay period epic formula, which was rebirthed by Gladiator in 2000 and has been dwindling ever since. Marshall’s low-budget preoccupation with splattering blood and limb-chopping carnage doesn’t help matters—though it will please the same audiences that loved Zack Snyder’s 300, who were no doubt concerned more with style than story anyway. If only Marshall’s style weren’t taken from better directors.