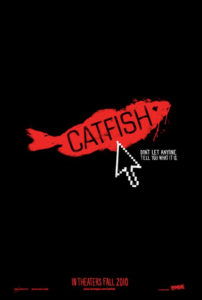 If you should enter a screening of Catfish without much idea of what you’re getting into, chances are you’ll be unsure about what you just saw. In what’s being called a documentary, the film offers a harsh critique of internet relationships, one that backs its censure with a case-specific argument. Whereas David Fincher’s similarly-themed The Social Network, in theaters at the same time as this alleged doc, has lucid intentions of a dramatic origin story to modern digital social communication, here the audience won’t walk away with any sense of certainty about what tricks the filmmakers behind the project have up their sleeves.

Here’s the setup: Filmmakers Ariel Schulman and Henry Joost are making a documentary about Ariel’s brother, Yaniv ‘Nev’ Schulman. Nev makes his living in New York City photographing dancers. One of his photos gathers some notoriety. One day, Nev receives a painting of his photo from an 8-year-old girl named Abby. They connect on Facebook and become virtual pen pals. Nev also begins speaking to Abby’s mother, Angela, and Abby’s 19-year-old sister, Megan. Abby and her family live in Ishpeming, Michigan, where she’s something of a local celebrity for her paintings. Nev speaks to the family members on the phone, and he regularly receives packages with new paintings from Abby. Meanwhile, Nev and Megan begin something of a virtual romance, sending pictures and steamy messages back and forth. And, without saying anything that will spoil the film for virgin viewers, Nev and the film crew plan to “pop-in” on Abby and family. The results are… interesting.

Now for questions. Is it real? The filmmakers maintain that the production is “one-hundred percent” real. Believe that if you will. But, real or not, does it matter? It would be easy to argue that the message behind the film is what matters—that as long as the viewing sends the audience home with the intended message, the film was successful. In some respects, this is true. From an artistic perspective, it’s a testament to the filmmakers’ talent if they can fool an audience into believing that what’s up onscreen is real. But there’s always the need for an audience to trust its filmmakers. Being unsure about a film leaves a persistent sense of doubt in the viewer, and, as recent examples have shown, such doubts can altogether ruin the experience.

Case in point, the recent documentary I’m Still Here by Casey Affleck supposedly captured the downward spiral of actor Joaquin Phoenix. How interesting it would have been to watch a down-and-out Phoenix try to reinvent himself as a rapper, had this development in Phoenix’s life been real. For months Affleck insisted that his film was authentic. But then, before most audiences could see the film, Affleck admitted that the entire project was a hoax and that Phoenix’s recent erratic behavior was merely part of that hoax. While this was no doubt done to salvage Phoenix’s career, the director also killed any interest that might’ve lingered for his film. Who wants to see a fake documentary about a real subject that has no truth to it whatsoever?

With Catfish, the filmmakers insist what the audience sees is real. That helps. Hopefully they don’t decide later to change their stance and announce it was all deception. Taken as a documentary, the film is frightening and simply made; though, its documentarians can be rather shallow—like a reality television crew out to confront the truth and catch it on camera. The emotional substance behind the story is clichéd, but that hardly matters once the story begins to unfurl. Should it come out that the film was entirely fictionalized, the film still offers the worthy lesson that virtual friendships should always be approached with misgivings. Contrived or no, for the film’s brief runtime the audience is rapt by a series of unraveling truths, what is ultimately a mystery that provides some insight into the ways in which people use the anonymity of the internet as a defensive social mask.