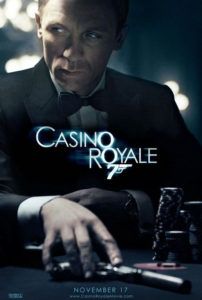 Detractors have targeted the 007 franchise for its blatant sexism, dated displays of promiscuity and unsafe sex, and irresponsible treatment of violence. Fortunately, Casino Royale lessens, if not wholly removes, those Bond stereotypes, modernizing the franchise for a new, more experienced cinema-going audience capable of seeing through the series’ old downfalls. I can only hope the filmmakers sustain the style in this new vision for future 007 films. Daniel Craig, the latest actor to embody superspy James Bond, is best known for his supporting roles in Road to Perdition (2002), Munich (2005), and a leading role in the British crime thriller Layer Cake (2004). He may not have the same easy good looks as Sean Connery or Pierce Brosnan, but he has an intensity that advances the character from a quipping hornball to a role that demands depth in the eyes and straightness in the mouth. Furthermore, Craig’s performance allows viewers to believe something is going on in his head, beyond mere bedroom exploits, and instead implies his weighted pathos.

Casino Royale is a prequel, in that it was based on the first of the James Bond novels by Ian Fleming and begins with Bond as a rookie double-oh. But like any Bond movie, there’s no such thing as a prequel or sequel; the period in which the film was made is irrelevant, and continuity between movies doesn’t exist. Connery’s run blatantly reflected the 1960s and early ‘70s, supported by George Lazenby in 1969; Roger Moore had the 1970s and ‘80s; Timothy Dalton was there briefly in the ‘80s too; and Brosnan won the ‘90s and early 2000s—and none of them correlate to one another. Casino Royale starts the franchise anew, complete with a fresh understanding of the character, fewer hokey gadgets, and a story rooted in reality, comparatively anyway.

The plot involves the usual 007 spy antics (stop the terrorist, get the girl, etc.), except the characters weaving the yarn are so firmly tied that the film, though bound by the franchise’s fondness for impossibly elaborate action scenes, entertains without reducing itself to a rolling-eyed guilty pleasure. Bond’s signature arrogant recklessness is still present, but that characteristic is twisted to represent a damaged, somewhat tragic figure. I could see future films with Craig’s Bond exploring alcoholism or some other addictive vice to deepen the character’s endless-yet-unexplained self-punishment. To further the film’s virtue, Bond doesn’t sleep with every female he sees; casual sex is not on his mind—just the mission. By the end of the film, I was amazed to discover 007 only woos one woman into bed (Eva Green). What’s more, they are in love with each other. There is a moment when we think Bond will seduce the bad guy’s girl, but on the clever part of the screenwriters, he doesn’t go through with it. Instead, Bond is just using her to get information. This Bond is a hero, just as the others were, except Craig’s Bond is a gentleman.

The action is also off-key for the series. The silencers and machine guns have been replaced with intense hand-to-hand and athletic combat. Bond becomes a physical hero, parkouring around a construction site or brutally drowning a villain in a bathroom sink. Director Martin Campbell, who also helmed the best of the Brosnan-era Bond films with GoldenEye, makes an impressive leap from mindless action fodder to gravitas-laden thrills. Comparable to the elevation from the Tim Burton/Joel Schumacher Batman films to Christopher Nolan’s artful interpretations, Campbell rethinks the franchise with all the atmosphere of an expert spy thriller and none of the cheeky antics that have wearily been associated with 007.

Every Bond film has a crucial moment, an action sequence or perilous situation for which audiences remember the film. Casino Royale has two. The thoughtful high-stakes card game will be remembered as the film’s centerpiece. So much tension revolves around cards because the stakes were so well set earlier in the movie. Every card is a bullet. Every fold is an explosion. And that villain “Le Chiffre” (Mads Mikkelsen), with his eye that drips tears of blood—how intimidating a figure from across the poker table. The other scene, which I will not describe in detail within this review, involves James Bond’s capture and subsequent torture. It’s a physically painful scene to behold for any man, and a rare (albeit welcomed) emasculation of the character, proving once again that Craig’s is not your typical Bond but a vulnerable personality complete with flaws and weaknesses.

Some fans maintain that no actor will ever out-Bond Sean Connery; certainly, the Connery films Dr. No, Goldfinger, and Thunderball hold iconic status for 007 enthusiasts (and apologists). But Daniel Craig and Casino Royale outdo them all, in part thanks to the deepening of the character and the plot’s plausibility. Looking at the individual films in the series, this is one of the few to take itself seriously; it tells its story with integrity, unlike the previous Bond works (many of which were campy at best). This is an excellent espionage picture—one that will blow away any fan of the 007 franchise and pleasantly surprise anyone who didn’t enjoy the films in the past.