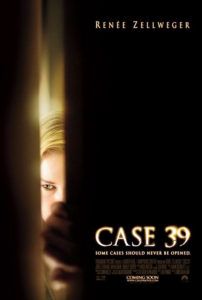 In the realm of evil child movies such as, most recently, Orphan, the dull supernatural thriller Case 39 does a disservice to the sometimes entertaining horror subgenre. Completed in 2006, the movie was shelved by Paramount stateside but distributed overseas where moderate box office performance justified its much-belated U.S. release just a few weeks before Halloween. But curious moviegoers and even horror fanatics won’t find much to savor in this laughable, often overwrought scenario, where a seriously bad youth turns the tables on unsuspecting adults.

Sour-faced social worker Emily (Renée Zellweger) probes into the thirty-ninth file on her cluttered cubicle to find the withdrawn, would-be innocence of little girl Lilly (Jodelle Ferland). Upon further investigation during an in-home interview with the weirdo parents, Emily comes to believe that Lilly is being abused; but without any evident bruises, she can’t be sure. Then Lilly whispers, “They said they’re going to send me to Hell.” That would be a good indicator, except what if the parents have good reason to send their child to Hell? But instead of questioning why the parents want to dispose of their child in their kitchen oven, Emily enlists her trusty cop friend (Ian McShane) to burst down their front door and save the girl from certain doom.

Despite help from child psychologist and almost boyfriend Doug (Bradley Cooper, in The Midnight Meat Train mode), Emily quickly regrets her hasty decision to fight for foster rights to Lilly. It seems people have a curious habit of dying around the girl in freak accidents and unmotivated murders, which occur after Lilly rings them with a devil-tongued telephone call. And when Doug meets his demise after he confesses to Emily that he was “threatened” by Lilly, our protagonist finally begins to suspect what the audience has known for half the movie. Lilly is evil. Though, we’re not sure at first if her brand of evil is supernatural (like The Omen) or just a good old-fashioned case of personality disorder (see Joshua).

As it turns out, Lilly is Satan or a demon of some kind; though the movie is never clear on this point. Rather than give the audience some inkling, the script by The Crazies writer Ray Wright plays with the irony of battered parents by the hands of a powerful child, but that stroke of cleverness grows old the moment we discover (in the vague way we do) Lilly’s demonic origins. So the movie becomes a horror show where Lilly holds incredible supernatural power over the good-intentioned Emily, creating phantom sounds and frightening situations as a tormentor. There’s an illusion where an elevator is falling, a shrug-worthy scene involving hornets, and one where Emily is being chased through the rain by a zombified burn victim. Emily seems terrified by it all. Pity the audience doesn’t feel the same.

Throwaway roles by Cooper and McShane somehow prove more interesting than Zellweger’s puckered performance, which quickly goes from caring pseudo-mother to arm-pulling deadbeat foster mom. Who can blame her though, when her foster daughter is a demon? Zellweger has an Oscar, but even reminding yourself of that won’t help her frustratingly dense character seem any more interesting. On the other hand, a horror veteran at 16-years-old, Ferland (who was twelve when the movie was shot) steals the show as the sharp-witted, slyly evil youngster. The Silent Hill and Tideland star seems typecast into bizarro children roles, but perhaps that’s because she performs them so well.

This makes the second grossly underwhelming Hollywood genre picture for German director Christian Alvart. Shot before his 2009 sci-fi/horror flop Pandorum, Case 39 offers little by way of storytelling ingenuity, and the trailers only make the movie’s release troubles worse. Viewers will notice scenes in the trailer (one where Lilly falls through the center of her bed, for example) that do not appear in the finished film, suggesting Paramount finally whipped together the footage to get the thing off their shelves. Well, now that it’s off their shelves, both the studio and the audience can move on and forget this unmemorable dud altogether.