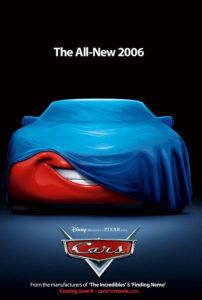 From their breakthrough short Luxo, Jr., about a rambunctious lamp child discovering a rubber ball, to their first feature-length computer-animated film, Toy Story, about the secret lives of children’s playthings, Pixar has been fascinated with bringing inanimate objects to vivid life. Released in 2006, Cars, their seventh feature, considers a world of anthropomorphized automobiles. Everything from insects to mountains take the shape of cars, allowing for no end of visual gags suited for adults and children alike. But more than any other Pixar film, this one feels less magical, less transportive, and less universal, appealing more to a niche market (auto enthusiasts) with highly commercial tastes than the demographic-free range of their other films. As a result, the production suffers a few downfalls unique for any Pixar production, but makes up for them with gorgeous animation.

Co-director and co-writer (not to mention Pixar chief) John Lasseter—working in part with Joe Ranft, who died during production—once again taps into our nostalgic past for prime narrative material. Whereas before Lasseter recognized our pure childhood affection for and dependence on toys, here he considers the old-timey simplicity of automobiles, and how their raw pleasures have been mutated by commercialism and “development”. Early incarnations of the Cars script—dating back to 1998 and similar in concept alone—contained none of the romantic notions of the road, until in 2000, when Lasseter took a cross-country road trip with his family. After the experience, Lasseter brought animators from Pixar on their own road trips across Route 66 and, along with the route’s historian Michael Wallis, explored forgotten stops and enjoyed the sheer freedom of the open road, planting the seed for a new take on a film about cars.

Written by six screenwriters, with several more receiving credit for “additional screenplay material”, Pixar becomes the sole exception where more writers means a more polished story. Put six screenwriters on a live-action film and you end up with something disjointed like Green Lantern. But with animated films, the entire picture must develop from the screenplay up, as opposed to improvisational visual or acting freedoms that occur on a live-action set. This is where Pixar and other animation studios differ; the basic approach is the same, but Pixar labors over a story for years—Cars remained in active development for five. And so, any disappointment felt after viewing the film is not the fault of the screenplay; rather, it results from the viewer’s non-status as a car enthusiast, or the conventional and certainly commercial appeal of the central automobile device. But even still, there’s plenty to savor here for audiences not up to speed on the many auto-related in-jokes throughout the film.

Perfectly suited for his naïve and overconfident role, Owen Wilson provides the voice of Lightning McQueen (as in the daredevil star of Bullit and Le Mans), a rookie racecar who ties in the opening race with seasoned challengers, Chick Hicks (Michael Keaton) and The King (Richard Petty). On the way to California for a tie-breaker race, McQueen finds himself detoured and busted for reckless driving in Radiator Springs, a town forgotten in Carburetor County just off Route 66 since the construction of the newfangled interstate. Forced to repair their Main Street before he can leave, McQueen soon befriends the town’s colorful locals: the well-meaning-but-dim tow truck, Mater (Larry the Cable Guy); the Corvette motel owner and local sweetheart, Sally (Bonnie Hunt); and a retired race car champion Doc Hudson (Paul Newman, in full The Color of Money mode for his last feature). Preoccupied with escaping to his race, he learns that slowing down and appreciating the little things, like friendship, is far more rewarding than the fame and fortune of being a racecar winner—but, of course, he becomes that too.

Pixar learned early on that animating non-living objects proves easier than actual people; this is something the studio struggled with until The Incredibles. And so, impressive are the surfaces in Cars, the way light reflects off characters’ shiny frames, bending with their contours. This kind of depth and physicality renders 3-D obsolete, and makes cartoony characterizations all the more believable. Lasseter devised the concept of making characters’ windshields their eyes, whereas earlier animated cars (such as Benny the Cab from Who Framed Roger Rabbit?) used headlights as eyes. Along with tires being extended on their suspensions as appendages and grills employed as mustaches and mouths, Lasseter’s choice allows for a wide range of emotion to flow from minor movement. These look and feel like tangible characters, despite the illogical nature of the whole scenario. One often questions who, if anyone, is driving these cars? How do they procreate? Or, are they created in a factory? And if so, who started the factory? If ever there’s a philosophical Cars sequel, these would be questions to address.

In keeping with Lasseter’s longstanding creative control, the film avoids what could have easily developed into shameless promotional opportunities with NASCAR and their sponsors. But there’s not one Mountain Dew or Tide ad in the whole picture. Competitors in the finale’s Big Race compete to win “The Piston Cup” and secure a sponsorship contract with “Dinocorp”, the gargantuan sponsor of McQueen’s hilariously staccato dreams, while “Rusteze”, a low-grade product linked to shabby inferior models, remains the mom-n-pop equivalent. McQueen’s eventual loyalty to Rusteze speaks to his character’s growth, and to the film’s overall theme of slowing down to appreciate the finer moments of life. Without a dependence on shaping their story around real-life products, Pixar can impart the clear emotional impact of the story without annoyingly obvious product placement.

In contrast, Pixar decided upon a soundtrack which—aside from a score by Lasseter favorite Randy Newman—is comprised of mostly popular commercial music that at times interrupts the story’s momentum with an unnecessary musical interlude, resulting in periodic dragging. The oft-covered “Route 66” has versions by Chuck Berry and John Mayer, while Sheryl Crow, the Rascal Flatts, and Brad Paisley are also featured. Only Newman’s original “Our Town”, sung by James Taylor, and the soda shop classic “Sh-boom” by The Chords enhance the film. The rest is filler, accommodating the lowest common denominator, and feels typical of lesser animation houses. In other scenes, Newman’s score drops and allows the animation to take center stage. There’s a beautiful outdoor sequence where Sally guides McQueen on a scenic drive; the purely visual scene, bookended by broad humor and exciting races, remains the picture’s most memorable.

At worst, Cars can be accused of dumbing down their storytelling to produce one of their biggest hits, a lasting franchise that has sold more merchandise, from videogames to die-cast models, than any other Pixar film, reaching upwards of $5 Billion (!) in sales. With a predictable story augmented by Pixar’s rare ability to heighten every emotion, calling this moneymaking machine their worst film must be qualified: It may be their worst, but then again, it only feels like a lesser product when compared to Pixar’s earlier work. Following titles like Finding Nemo and The Incredibles, it had much to live up to. On the other hand, had this been by Dreamworks or Fox’s animation studios, this review would probably be a far more enthusiastic one, as their movies set the bar so incredibly low that Cars rises above them. Indeed, this is a very good piece of animation, but given the source, it’s not unreasonable to expect better.