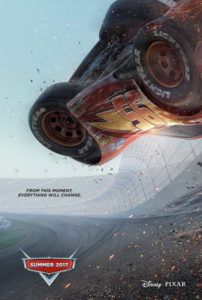 Pixar’s Cars franchise, including the 2006 original and the 2011 sequel, may not be critical favorites or the studio’s most sophisticated films, but the toys, videogames, and cross-promotional opportunities with NASCAR have earned them billions. Unlike the universal appeal of other Pixar efforts such as Finding Nemo or WALL•E, the Cars films have a comparatively limited audience in that, rather than appealing to everyone, they appeal to mainstream sensibilities steeped in Americana, motorhead fanaticism, and lowbrow humor. Pixar’s Cars productions were the passion projects of John Lasseter, the animation studio’s head and co-founder, and director of the first two. For Cars 3, Lasseter steps aside for the directorial debut of Brian Fee, a longtime storyboard artist and animator. And while the film’s visual treatment is another breathtaking sample of Pixar’s animation wizardry, the narrative plays like a tired and unfocused retread of sports movie clichés.

After the disappointing Cars 2 proved a strange, albeit entertaining addition to the Pixar oeuvre—first by focusing on Larry the Cable Guy’s hillbilly tow truck Mater, second by applying a spy-thriller scenario to anthropomorphized vehicles—Cars 3 gets back to basics. The script, handled by three talents on the story side and another three on the writing side, delivers something between Rocky 4 and Moneyball. Once again, the story centers around Lightning McQueen, the cocky race car voiced by Owen Wilson. After a long period of comfortably dominating the top spot, Lightning faces a newer, younger, more high-tech series of opponents, complete with statistical analyses that evaluate and optimize their driving conditions with virtual reality simulators. Lightning begins to look obsolete by comparison, especially after a disastrous crash, and so he must learn a new way of racing to compete with the younger breed. To be sure, the narrative takes a cue from Toy Story 3, in which Andy grows too old for his toys and, eventually, they are nearly turned into trash when they face a nightmarish garbage incinerator.

The millennial devils are represented by rookie Jackson Storm (Armie Hammer), whose entourage has racing down to a joyless science. By contrast, Lightning wants to train in the sand, the Rocky-equivalent of punching meat. “I need to get my tires dirty,” he proclaims, remembering how his late mentor, Doc Hudson (Paul Newman, in flashbacks only, obviously), trained him in the first film. However, Lightning’s new sponsor (Nathan Fillion, fulsome incarnate) demands that he train with the same simulators as the younger competition. The new regimen comes complete with a go-getting personal trainer, Cruz Ramirez (Cristela Alonzo), who long ago held dreams of becoming a racer herself. Cruz’s newfangled tactics don’t work on Lightning, and he resolves to venture across the country for a series of alternative training methods—first at a demolition derby, then alongside Doc’s former mentor, Smokey (Chris Cooper)—with Cruz tagging along.

As you might expect, the scenario leads to a climactic race where a story-altering twist occurs, resulting in a feminist message for modern audiences, but the dramatic shift doesn’t feel justified by the preceding events. Much of the story feels obligatory and unurgent. Lightning’s need to win is largely a matter of ego, while Cruz, a grossly underdeveloped character devoid of a memorable personality, seems to have more motivation but not enough screentime. And when the story inevitably, predictably, switches from a focus on Lightning to Cruz, the audience hasn’t been given ample reason to care—aside from wanting to see Jackson Storm receive his comeuppance. Meanwhile, several outdated callbacks and gags saturate the bland material, such as Lightning’s stereotypically Italian pit crew, or the repeated presence of Larry the Cable Guy’s contractually-required catchphrase “Git-er-done.”

The shrug-inducing quality of the story is particularly irksome because Pixar has made some visible leaps in their photo-real animation. Fast-paced racing scenes early in the film look like the real deal, while the cross-country montages showcase some stunning vistas, from foggy mountain passes to sunsets on a desert terrain. At several points during the film, I found myself more interested in drooling over the background than bothering with the formulaic beats of the story. Of course, the cartoony-looking automobiles with faces present a stark contrast to their settings. The effect is rather like The Good Dinosaur, the underrated Pixar film from 2015 that seemed to place characters resembling Winsor McCay’s Gertie the Dinosaur into an expansive Western landscape.

Although the disastrous performance of their part-live-action effort John Carter is likely to blame, I remain interested in seeing a Pixar film that sets aside their cartoon-like characters and tries something entirely photo-real. Imagine an obscure period piece or science-fiction epic done completely in Pixar’s exceptional animation. The possibilities would be endless (or it seems like they would be, anyway).  Of course, the animation is never the problem with Pixar, but the scripts are sometimes wanting. From the story structure to the characters, Cars 3 has a well-worn, delivers-what’s-expected quality that lacks vitality. Alas, the need for name-brand recognition and merchandising leaves animation enthusiasts with yet another banal sequel that diverts the attention but doesn’t engage the imagination.