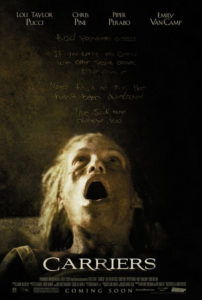 Paramount Vantage wants you to believe Carriers is a zombie movie, but no matter how many shots the promotional department shows of undead-like creatures opening their eyes, either on the poster or in trailers, don’t be fooled. Preconceived notions that flesh-hungry monsters will be slugging along, or running, after a few lonely survivors of the apocalypse will only ruin your otherwise engaging experience. Indeed, it contains horror elements, but it’s about the loss of humanity in the absence of society. And while almost all zombie movies relate that theme, here the metaphor comes without brain-eating antics.

Some months after a pandemic wipes out most of humanity, a few lingerers try to scrape together supplies, get somewhere safe, and quarantine themselves. Laws no longer apply. Survival is all that counts. The disease emerges when rashes appear on the infected person’s body, and then they begin to bleed out and eventually die a quiet, slow death. No rising from the grave needed, as the fear of contagion is enough. Here’s a movie that fleshes-out those What If? conversations you’ve probably had with your friends about the smartest thing to do in an apocalypse scenario. Because it’s airborne, everyone wears masks—some wear those cheap white surgical masks, while others wrap themselves in plastic and don full-fledged CDC issue gas masks. Survivors are paranoid about catching it, a disease that’s never mentioned by name, allowing whatever bug that’s making headlines at the moment to pop into viewers’ minds (Bird Flu, Swine Flu, take your pick).

The movie opens with four twentysomethings driving on a deserted highway. They come upon an SUV parked in the road; a father (Christopher Meloni) and his little girl need gas. They see the girl is masked, but she’s clearly dying. Living by a strict set of survivalist rules, they must avoid the infected at all costs. If it means leaving someone behind, so be it. Of course, those rules are immediately broken. Their car springs a leak as they try to desert the stranded father-daughter pair by passing on the rocky shoulder, forcing them to go back and, at gunpoint, commandeer the man’s vehicle. They wipe it down with bleach and then put the father and daughter in the back behind a makeshift bubble of plastic and duct tape.

They’re led by Brian (Chris Pine), an unrelenting take-charge type who’s made everyone in his foursome agree to his remorselessly logical guidelines about keeping alive. The more sensitive Danny (Lou Taylor Pucci) follows his brother, because caring about people the way he does will probably get him killed. Bobby (Piper Perabo) and Kate (Emily VanCamp) are their respective lady friends. Stops at an assortment of potential safe-houses show us body bags and abandoned buildings, the failed attempts by the government to regain control. The landscape is more 28 Days Later than The Road Warrior, meaning fresh corpses still rot, and gasoline hasn’t yet turned to sand. It’s a somewhat episodic road movie, each encounter presenting new conflicts, building slowly to the point when Danny must stand up to his brother’s harsh reign, even if his survivalist logic makes sense.

Written and directed by brothers Alex and David Pastor, Carriers was completed a couple of years back and all but shelved until Star Trek’s Pine wowed everyone as Captain Kirk earlier this summer. Undoubtedly, Paramount found their motivation to release this movie in their star, and along with cleverly misrepresenting it as a zombie flick, they took advantage of the opportunity. So, the studio cut the runtime down to a brief 84-minutes, edited-out some violence and swearing for a more marketable PG-13 rating, and released what was left in only a handful of theaters.

In addition to being dumped, Carriers feels tampered with, and sloppy in the finale when it tries to bring some vague meaning to the madness via cheesy narration. At the center, however, the morality clash between Pine and Pucci’s brothers proves challenging on the level of a solid psychological thriller. In contrast, the typical horror jolts and gory scares feel included only to keep the lazy-minded moviegoers interested. Although the film comes very close to being more than run-of-the-mill horror fodder, too much studio meddling and a shifting genre tone leave the result uneven.