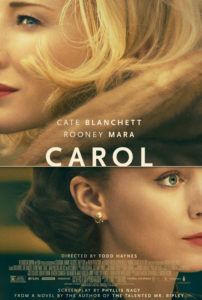 Patricia Highsmith published her 1952 novel The Price of Salt under the pseudonym Claire Morgan. Undoubtedly, the novelist made this decision because her story about a scandalous romance between two women ends in passionate embrace rather than violence or tragedy. Highsmith’s characters often contain an attraction to the same sex; however, more often than not, that characteristic is linked with murderous impulses and amorality, from her Tom Ripley novels to the psychotic Bruno from Strangers on a Train, her first novel. Her second, The Price of Salt, is unique for its first-person entrance into the mind of a young woman in love with another woman. Director Todd Haynes and screenwriter Phyllis Nagy have adapted the book into Carol, a beautifully acted and shot love story that embraces Highsmith’s rare helping of warm optimism.

Knowing Haynes’ body of work, from the Karen Carpenter short Superstar performed with Barbie dolls to Far From Heaven, where a forbidden mixed race couple is ostracized by their community, one enters Carol with a pervading sense of dread that things might not work out for the two lovers. Therese Belivet (Rooney Mara) is a New York shopgirl who dabbles in photography. Highsmith’s book was told entirely from Therese’s perspective, watching with complete, curious infatuation Carol Aird (Cate Blanchett), an elegant and affluent, but also mysterious woman. Though it may seem like a matter of a young, inexperienced woman admiring the more assured posture of her elder, it’s far more complicated than that. Therese admits that she doesn’t know what she wants, and so her boyfriend Richard (Jake Lacy) clings to her, asks her to marry him, or at least take a trip to Europe. There’s another fella, Dannie (John Magaro), who has more in common with her, but she doesn’t really want him either. She’s clay waiting to be molded, but so far, she hasn’t found the right artist.

When she first sees Carol, however, Therese enters an entranced gaze, lost in Blanchett’s beauty and that roselike curl in her hair against her right cheek. Therese, who has drifted through a life of uncertain desire, finally feels something real. Exploring her feelings is a process of delicate flirtations, moves and countermoves, before anything tangible can happen. And when it does, Haynes shoots the scene tastefully and intimately. Meanwhile, Carol’s situation burdens her with the responsibility of a child and a soon-to-be-ex-husband (Kyle Chandler), who threatens to expose her “pattern of behavior” with female lovers to gain sole custody of their child. Supported by her former lover and best friend Abby (Sarah Paulson), Carol must struggle with a life of compromises and veiled desires to maintain an outward appearance of normalcy, or at least what their postwar society deems to be normal. But, as we learn, all outward perceptions of their romance fade into something far more pure and simple. A refreshing and gratifying notion, to be sure.

Haynes, an experimental filmmaker whose dramatic work may seem straightforward yet is anything but, knows just how to fold his audience into a moment. There’s a pair of brilliant scenes in Carol, one near the beginning and the other near the end, that work together to show the audience the importance of perspective. In fact, they’re the same moment in the story, simply shown from a different angle. The first scene follows a man into a restaurant, where he sees two women, played by Blanchett and Mara, the latter of which he recognizes. He goes over to say hello and ends up leaving with Mara’s character to a party. Over the course of the film, we learn these two women were in the midst of a crucial moment after a haunting love affair. When we see the scene again, this time from inside the affair, the earlier moment becomes a brutally emotional scene to behold. As a director, Haynes creates a powerful degree of empathy and tenderness between the two scenes, just as performers Blanchett and Mara demonstrate a wealth of understated acting.

Haynes and his production designer Judy Becker perfectly capture the time and place, as each of the director’s pictures adopt a period setting and each remain shaped by their surroundings. Costume designer Sandy Powell adorns Blanchett with elegant furs and pastels, while Mara’s garbs look more bohemian, patterned, and less labored. After all, Carol has mastered her façade over the years and hidden her desires well, while Therese remains confused and uncertain of her desires for much of the film. Shooting in muted colors and soft, grainy photography, cinematographer Ed Lachman’s absorbing work lends to the film’s overall feeling of uncertainty and exploration. Elsewhere, Carter Burwell’s moving score never puts too fine a point on the melodrama. If a false moment exists in Carol, it’s when, during a conversation of some importance, there’s a revelation of sorts, and then it begins to snow like out of a Frank Capra film.

When the final scene arrives, it’s a dialogue-free moment where Carol and Therese’s eyes meet in a crowded restaurant. The scene is loaded with meaning and the fulfillment of our every wish for the characters. Such a rare happy ending for this kind of relationship in this kind of setting comes as an overwhelming joy, making Carol into an unlikely story of love conquering all. Guiding our every emotion through the film is Mara, whose sense of unfocused yearning finds a sharp subject in Blanchett, who’s far more than an obscure object of desire here. Fortunately, Haynes doesn’t turn Carol into a film about one woman’s desire for another. Both of the leads are three-dimensional characters, performed with the same precision and masterful calibration as demonstrated by their director. Despite the hopeful conclusion, Haynes has made a rich, sophisticated, and complex film that stays with its audience long after it cuts to black.